How endothermic is splitting oxygen into hydrogen atoms?

I’ve been looking into the chemistry of a pyromancer character for some time and I’ve come to a bit of a snag. The character has control over the electroweak force and uses it to induce a directed, continuous combustible reaction in the air between oxygen, hydrogen and nitrogen, which is started by a small electrical discharge.

Thing is, when it comes to direction, I can’t figure out a way that by using either force to create a concentration of the needed gases in a cone that is, let’s say, one meter in width and eighteen meters in length, unless the character causes the break down of oxygen atoms to hydrogen atoms, thus creating the sample mentioned above.

a) Is this a somewhat good idea?

b) Is there any better, less suicidal, alternatives to my problem?

The character has control over the electroweak force and uses it to induce a directed, continuous combustible reaction in the air between oxygen, hydrogen and nitrogen which all started by a small electrical discharge

I see what you're trying to do (nuclear physics), but you don't need it (IMO) and it's likely counter productive.

Chemical bonds are many orders of magnitude lower in energy compared to nuclear bonds.

If your character can control nuclear interaction they absolutely do not need to worry about combustion to generate energy. They'd be, as it were, up to their necks in energy !

What we're talking about here is the difference between a tank of gasoline exploding and a nuclear warhead.

The problem your character will have is that splitting Oxygen into Hydrogen atoms with some "electroweak magic" involves enormous quantities of energy and these energies are beyond a useful human level of use. It would depend somewhat on the details of your magic system, but a lot of energy is in play - way too much IMO.

Thing is, when comes to direction, I can’t figure out a way that by using either force to create a concentration of the needed gases in a, let’s say, cone that is one meter in width and eighteen meters in length; unless the character causes the break down of oxygen atoms to hydrogen atoms and thus creating the sample mentioned above.

Hydrogen, Oxygen and Nitrogen are everywhere. They're easy to obtain, especially if your character has control over (just) the electromagnetic forces. They can break bonds and control electric fields and direct particles.

Molecular oxygen needs very little encouragement to bond to molecular hydrogen. Note that free atoms (non-molecular) are not the norm in nature.

There's simply no need to go (dangerously) nuclear to get these chemicals if your character controls electromagnetic forces in some magical way.

All your character needs to do is get water vapor into reasonable concentration in a given area and then magically split the atoms apart whereupon the now freed atoms would almost immediately start trying to bond once your character restores the fields to normal.

The energies involved are what I would term "human level" as they are at an everyday level humans are used to seeing and dealing with.

From a creative modelling point of view the maths here is simpler (not necessarily easy, but simpler than the nuclear option). Explaining this (and glossing over the details) is easier to write about and read about.

As mentioned there's the enormous level of energy involved. These are bound states and the binding energy of these nuclei is such that you have to do the equivalent of pumping in vast amounts of energy to split Oxygen nuclei.

Note that once split it's a lot harder to stuck nuclei together (fusion) than it was to split them. So reversing the process is harder.

Assuming your magic takes care of that binding energy problem there is the trivial problem of lethal neutron radiation !

An Oxygen-16 nucleus has 8 protons and 8 neutrons. A normal hydrogen nucleus is just a proton. Lots of neutrons suddenly released.

To avoid this your magic has to allow the Oxygen nucleus to be split not into plain old Hydrogen, but into Deuterium - the isotope of Hydrogen with one proton and one neutron. The proper name for this isotope is Deuteron but let's keep it simple.

There will still be problems. Splitting the nucleus doesn't mean you get a conveniently harmless neutral gas. You've just created an extremely dangerous ball of plasma - charged deuterium nuclei and electrons which are not bound to each other (yet) in nice neutral atoms. Stopping an explosion is not going to be a problem - controlling one is ! These particles will try and bond with anything they can, including themselves and any container or other molecules in the air.

Side note : Deuteron is a stable nucleus and makes no practical difference to normal chemistry for Hydrogen.

So what you get with the nuclear option is a chaotic mess that involves huge energies and can't be easily reversed.

I really don't recommend this approach. The energies and states of matter involved are not at a human level and will be very complex. Writing and reading about these will be very complex and turn a work of fiction that should be focused on story-telling, narrative and character interactions into something more like an undergraduate text on particle physics. It's not a direction I recommend for that reason alone - you'll be explaining way more than the reader wants to know (or end up with a very small audience who'll get into it).

I agree with the others that this is a bad idea, however to answer your question directly:

So you need to inject just over 100MeV per atom in order to perform the split. That is wildly endothermic (to say the least). So, transforming this into units that make sense at a macro level. Let's say you want to create a cubic metre at standard temperature/pressure, which is around 2*10^25 molecules. So, we're talking around 2*10^33 eV required here. That makes about 3*10^14 Joules you need to find from somewhere.

For reference, a bolt of lightning is around 10^9 Joules, so we're talking only about 300,000 bolts of lightning being sucked into your cubic metre of gas, which then results in around 10,000 Joules produced from combustion with some more oxygen, which powers, uh, 0.001% of a lightning bolt (or raises the temperature of a glass of water by about 10 degrees C).

Alternately, let's say you draw the energy from the surrounding air. The thermal energy in air is around 355kJ per cubic metre. That means you've sucked all the thermal energy (dropped it to around absolute zero) from 8.5*10^8 cubic metres of air, or in more graphic terms, solidifying the air in a layer 15 metres thick over an area the size of Manhattan. For a ten degree raise in your glass of water...

If you can produce thousands of billions of Joules of energy from nowhere in particular, using it to disassociate Oxygen nuclei into Hydrogen to burn it is just a wee bit wasteful. Just blow whatever you want up with your 300,000 lightning bolts, or deep freeze the whole city that offended you.

HOWEVER, it's a freaking awesome visual. Mage stands on top of a hill, drawing a vast vortex of wild energy the likes the planet has never seen before. The sky darkens and flashes of light echo around the ridges with the near constant booming of thunder. Mage releases the spell and all hell breaks loose as lightning converges from every direction on a small piece of air in front of the mage, which then absorbs it all and goes "phut", rather quietly.

No, messing with nuclear forces is not a good idea. Other answers already explained some of the reasons so I'll not list them.

The easiest way to do pyrokinesis pseudo-scientifically is to simply telekinetically control atmospheric oxygen.

You want something to burn you simply make it attractive to the oxygen. As you increase the force the oxygen concentration and pressure on the surface of the target will increase. This will both reduce the ignition temperature needed and increase effective temperature. So boom, unless the target already has fully oxidized surface. It is also corrosive. And toxic. And gets into your eyes and lungs.

Since you had the magic tag, I'll note that if you can do this as an area effect on an area surrounding anti-magic field it will still work since the increased concentration, pressure and temperature is a normal physical effect. It would also circumvent many anti-poison and anti-fire protections.

Have you considered that oxygen is quite combustionable on its own, fire can exists in our world thanks to oxygen. You just need to concentrate oxygen a little over the 21%, that's the natural concentration on Earth. The bigger the oxygen concentration the stronger the fire. Leave fision for when your character is able to completely destroy countries on its own. If the concentration of oxygen is big enough a little sparkle could start a very big fire even an explosion. 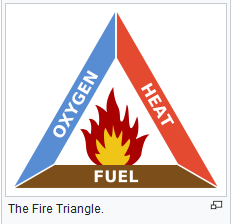 Not the answer you're looking for? Browse other questions tagged magic super-powers chemistry or ask your own question.

10
How would modern firearms behave in a high oxygen atmosphere?
21
How can I create explosions without using oxygen?
7
How would an ecosystem based around chemotrophs produce oxygen?
12
How much hydrogen and oxygen can I add to an atmosphere before it explodes?
7
How to make a microbe that can eat metal and breathe hydrogen?
1
The chemical and nuclear science behind pyromancy
1
How could hydrogen in a vacuum be removed/extracted?