How would a Universal Coordinate system work?

Obviously the Lat/Long system works because we have identified the North Pole, the South Pole and the Equator of the Earth. This allows us to give 2 arbitary numbers to locate any point on the globe. I am imagining that to have a similar coordinate system in the Universe we would also need to mark out some absolute points.

Whereas the Lat/Long system only requires 2 coordinates, I can imagine a Universal Coordinate system would require at least 3 coordinates. I have been considering adding time as a 4th coordinate, as everything is in a state of motion, knowing the time might help work out relative points if no absolute points can be found.

In general I am struggling with how a Universal Coordinate System would work. Simple X, Y, Z coords (with 0,0,0 being Earth?) seem insufficient in a medium that is in a constant state of change.

Has anyone else tackled such a system? 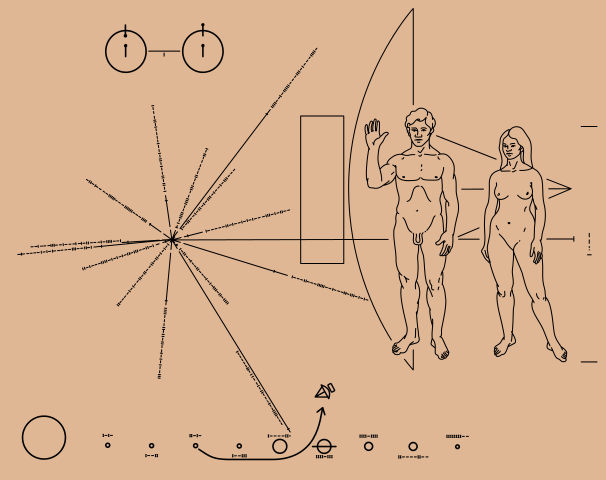 See that bunch of radiating lines on the left? That's a remarkably good way to identify where (and perhaps even when) Earth was when the space probe was launched.

The patterns on each line represent the pulses emitted by a particular pulsar. There's some additional fiddliness here caused by the need to encode it in binary and include a way to describe the time period being encoded, but that's for communicating with aliens and you don't need to worry about that.

Because each pulsar is uniquely identified by its period, you can describe your location in terms of the angles between various specific pulsars which will effectively pin you down in space. You don't even need to know how far away the pulsars are, which is nice.

Pulsar positions will drift over time, and their pulse rates will decrease, but those timescales are long and if you only need to have a location that's good for a few thousand years you'll be just fine. Beyond that it'll still be traceable by anyone who has got a good model of pulsar spindown and orbital motion about the galactic centre, though without also knowing your velocity and heading (which you'd need to encode separately) they wouldn't know where you ended up. Multiple solutions may crop up as one pulsar slows down to the point where its period precisely matches that of an ancient pulsar used to define a location, but handling that is a Simple Matter Of Mathematics, of course.

The system can be made universal, but the position will be in terms of the pulsars in a particular galaxy. You'd need some completely different way to describe the position of your galaxy in terms of other galaxies... SRM suggested Quasars which could work, though they lack the signature pulse rate that makes identifying specific pulsars relatively straightfoward.

Honestly though, if you can manage easy intergalactic travel and communication, you'll be able to find someone or something who can think up a better navigation scheme, as near-godlike powers will be required to cross intergalactic distances in any reasonable length of time.

It's not a simple topic, but it's worth your time. They're basically the 6 numbers required to describe the position in time and space of an object orbiting another object.

Because there are no privileged frames of reference in space.

To mathematically describe an orbit one must define six quantities, called orbital elements. They are

Their details require a bit of book learning I won't copy-paste here, but they're available lots and lots of places (wikipedia, your local library, your local astronaut, "SevenEves" from Neil Stephenson).

Not the answer you're looking for? Browse other questions tagged science-based universe or ask your own question.

11
How would a world with drifting land-masses be mapped/charted for navigation?

4
How could a sentient life form move an exoplanet the mass of the Earth?
9
Repulsive Universe
27
Lost in the multiverse: how to find home?
4
Where and how can we mine diamonds outside of Earth but within our Solar System?
16
What impact is required for a visible (from Earth) ejecta plume on Earth's Moon, and would the Moon survive?
8
Deriving a system of scientific units
6
How to reduce demagogues' influence on the universe literally shaped by people's beliefs?
1
Extrapolating from the GPS network for time travel
6
At What Point Does a World's Twin Planet Disappear, from the Viewer's Perspective?
5
When universes collide