How to trap and kill a T-Rex-like creature?

The story: in a fantasy iron age world, a T-Rex-like animal (actually more like the size of allosaurus) has emerged from the forest and started killing people. The animal always retreats to the forest after making a kill, and it never strikes in the same place twice, which makes hunting it difficult. Because it's considered too dangerous to kill it head-on, a group of forest rangers decides to create a trap to kill it. The trap has to be placed deep in the forest to catch the animal off-guard, because it becomes very careful as it gets close to human settlements. The trap also has to leave as little trace as possible (scent or otherwise) so that the animal isn't deterred from approaching the trap. What kind of trap or approach would work best in this situation? 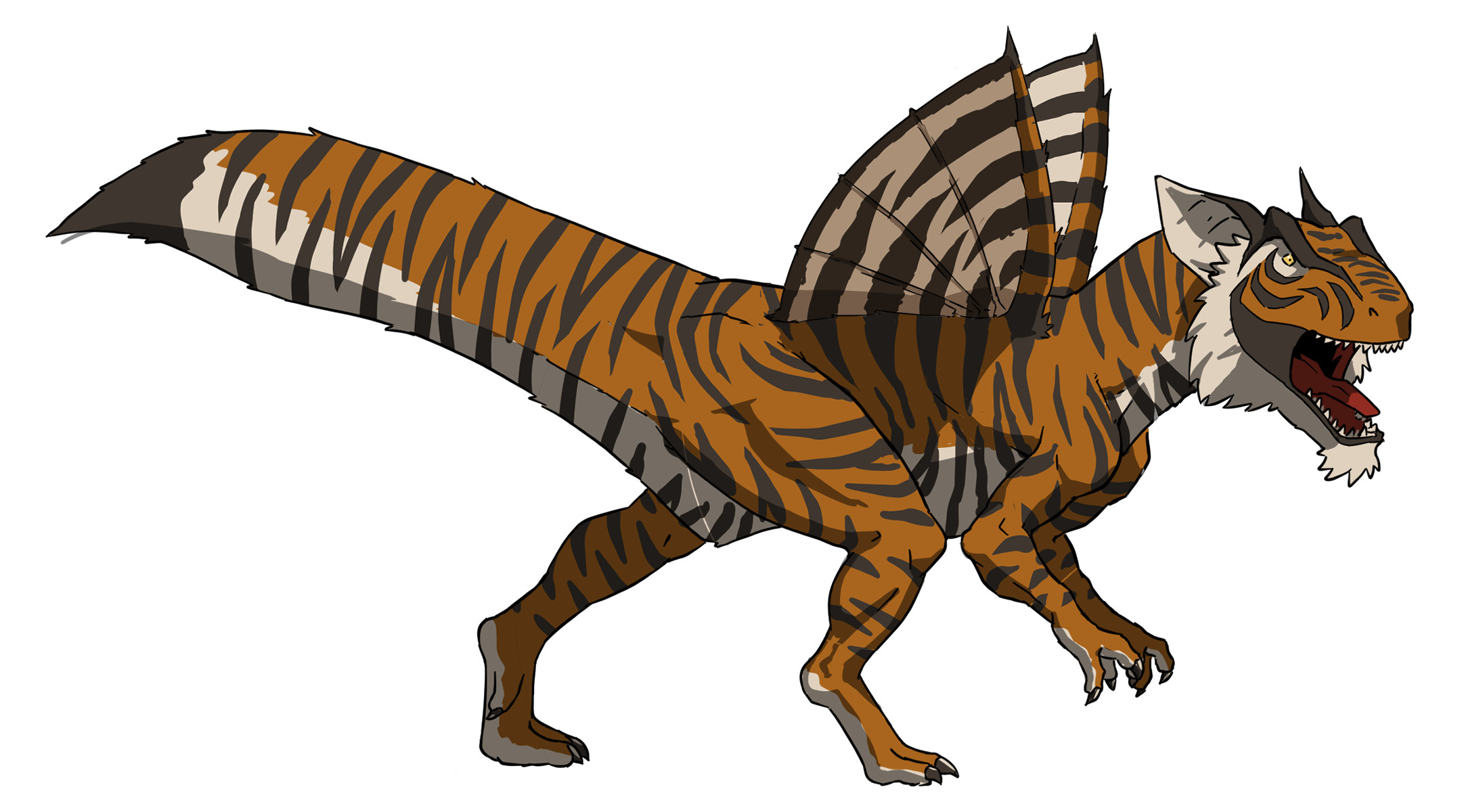 Aside from the traits described above, the animal has the characteristics of a tiger: it's solitary, would take its prey to the forest to eat later, somewhat good at climbing trees (the forest has really big trees), and is very sneaky. It usually lives in deep forests with heavy vegetation and eats forest animals as large as itself, but this one for some reason have a taste for people. It's as intelligent as a chimpanzee, can remember human faces, and can recognize that some humans are more dangerous than others (it's a point in the story that a character tries to kill it head-on but fails, and then the animal persistently chases him because it recognizes him as a threat, but also recognizes that he has lost his weapons and is currently helpless).

I realize that the obvious answer might be "use a trap for tigers but bigger", so please explain about the details and obstacles of using such trap so I can better incorporate it into the story.

A big hole in the ground with fabric and leaves on top sounds reasonable. Given how big it would have to be, there might be need for a wooden structure that would be weak enough to collapse under the T-rex's weight but strong enough so smaller animals don't trigger it.

Lace a dead animal with poison, leave it in an area for the T. rex to find, it eats the poisoned animal and dies. A large carnivore like that isn't going to pass up a free meal. This is how people deal/have dealt with intelligent, large predators like wolves and coyotes even today. And if it can work on a coyote, which have a good sense of smell and are known to be canny, it can work on a T. rex.

Traditional traps have had the same designs for thousands of years:

"They look like a pile of stones, like a cairn, and you need a good eye and also some digging around to realize what it is," Porat told LiveScience.

To set the traps, people would have attached a tasty piece of meat at the end of a rope to lure the leopards or other carnivores.

"When the carnivore pulls at the bait the rope is attached to a slab door and it just closes, so the animal is trapped inside this carnivore box trap," Porat said, referring to a door made from a slab-shaped rock.

The problem is scaling the device. While a pile or rocks (or a wooden structure) that can trap a leopard isn't much of a problem, the idea of building a trap sized for an Allosaur (or T-Rex) is going to simply create too much of a disturbance and alert anything in the vicinity.

So instead of a trap or hole in the ground (same issue), you will need to do something like a tree drop.

The lure is still a piece of tasty meat, but grabbing the lure releases the trigger and causes something like this to swing out from the trees and strike the target: 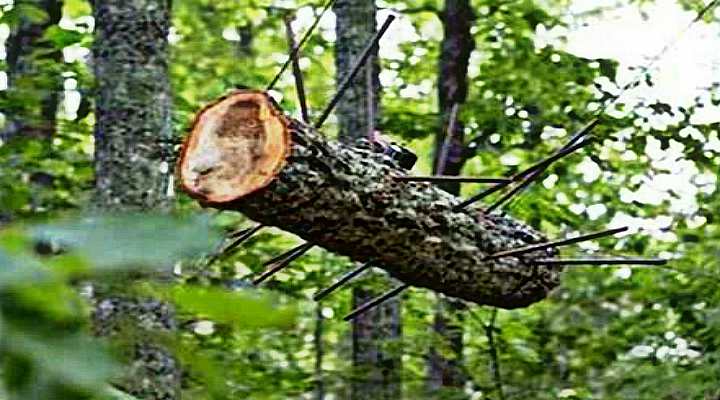 If the target is very large, then a massive deadfall trap might be required: 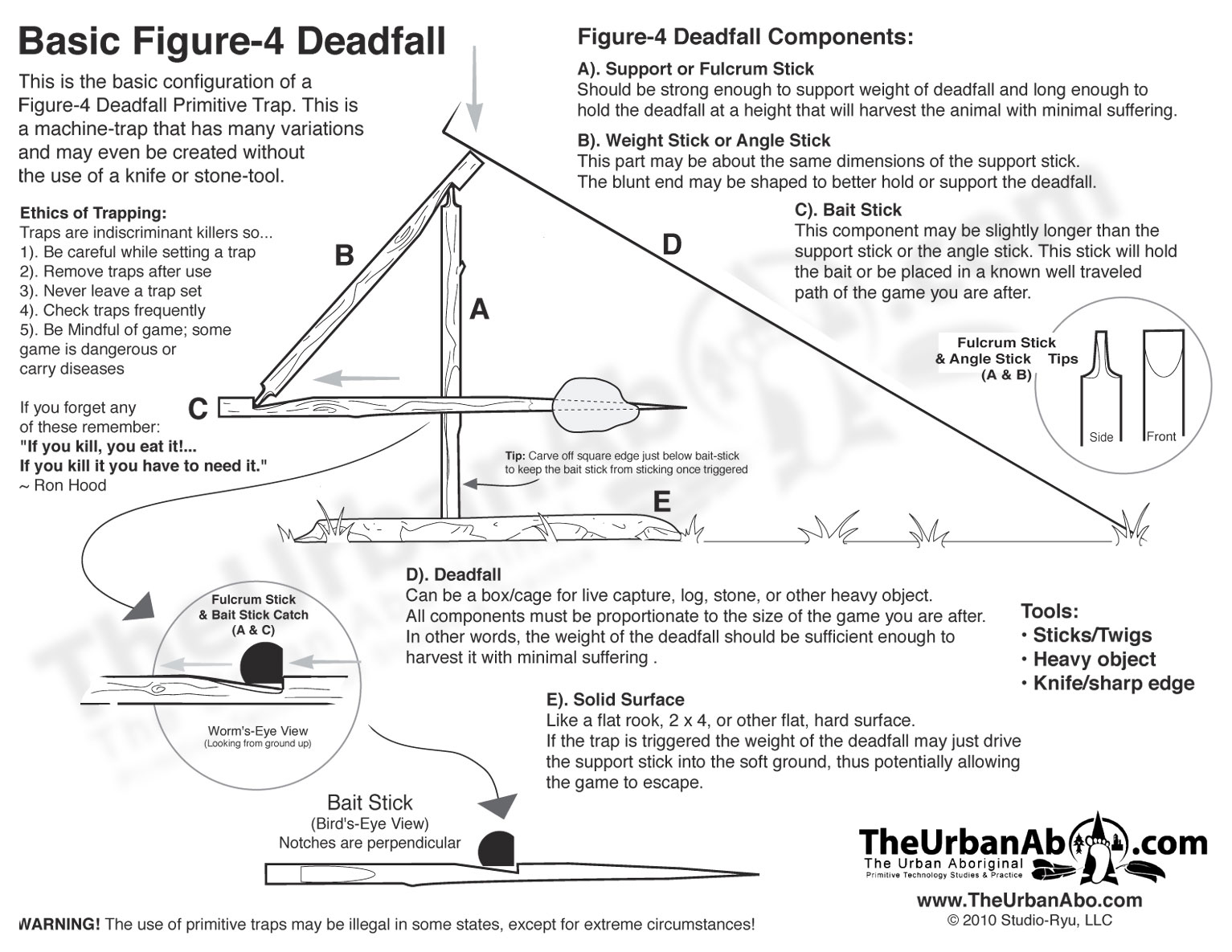 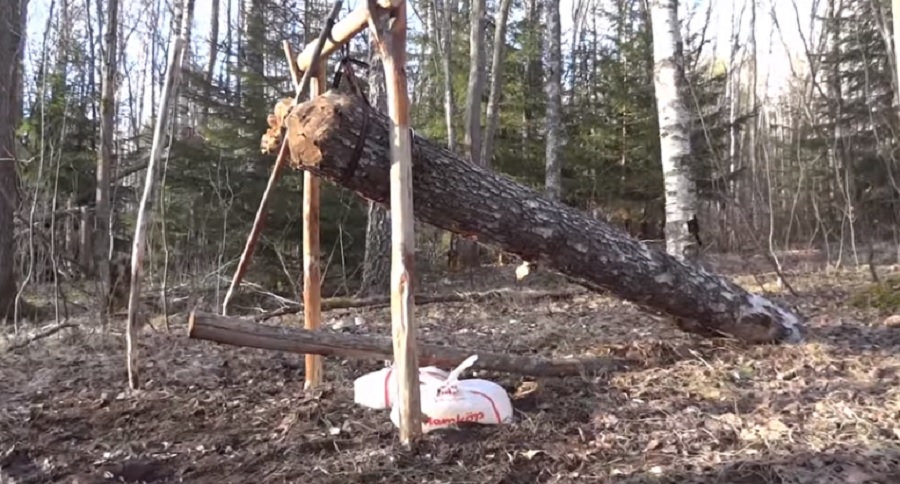 A tree trunk would deliver a blow of several thousand pounds to several tons across the neck or back of the creature, likely being more than sufficient to deliver a killing blow.

If you have enough patience, you can totally catch it within 2-4 years.

Start feeding cattle brains to some of your cattle. Watch until they start showing signs of scrapies, a.k.a. mad cow disease. Once you get some scrapies-ridden cattle, feed their brains to more cattle.

Now simply release those cattle in the wild. The creature will likely feel lucky for finding such easy prey and will feast upon them. Voilá, you've got a T-Rex like creature whose brain is degenerating by the moment. All you need now is a search party - if you don't find it dead, at least it won't be able to flee or defend itself.

First, pattern locking is required—examine different attack sites to figure out the pattern. If it was a creature it must have a pattern of which it attacks. Depending on the setting, this first step may require hundreds of people carefully planning and calculating or a single computer running a neural network-based prediction algorithm.

Once elucidated, the hunters would need to go to the exact predicted next attack, and set up a trap there. It’s better to set up multiple traps at the most likely locations of the next attack to be sure.

Set up as powerful a trap as you can— drop traps with sharpened stakes at the bottom, with covers that flips so the beast can’t escape once in. Oil in the trap and torches to light the beast on fire and cook it from outside in once the beast fell into the trap. The details depend on how you want to write your story. No kill is overkill.

Depend on your purpose, and whether you want to keep the animal once killed (since you have specified that the primary purpose is to kill the beast), the details of the trap may vary, but the end is just to plan carefully beforehand and use as powerful a trap as possible for your hunters, so that the first shot would succeed.

Subsequent attempts at trapping the animal may be difficult, should the animal escape the first attempt.

There is a saying in Chinese called, ‘Playing the pig, to eat the tiger’.

It is about acting weak, to swallow the stronger force.

In this case, it may be very applicable.

You can have a physically ‘weaker’ human, a non-hunter, pose as the pig. That, or a very strong hunter, acting ‘helpless’.

The ‘tiger’ would sense their weakness and attack, trusting their judgement and instincts, lowering their guard.

By making use of the ‘tiger’s’ indiscretion, the ‘pig’ can then mortally wound/injure the tiger. The ‘pig’ would probably have to use a strong paralytic poison on the ‘tiger’, as considering its large size, a normal poison may not kill it fast enough. The ‘pig’ could use blow darts or throwing devices to apply the poison at a reasonable distance.

As soon as they apply the poison, they can fire a signal and make use of a pre-dug escape pit in the ground to escape immediate harm, leaving the paralyzed tiger for a team of nearby hunters to swallow.

As to who would be the pig, it would probably be a brave volunteer, looking for revenge for their family. They would have to be nimble and extremely perceptive, but not give off any dangerous ‘scent’.

10
How to Escape an Impossible Situation Using Minimal Magic?
8
Man-portable weapons for post-disaster Arkansan troll hunters
12
How effective would a full set of plate armor be against wild animals found in temperate regions (bears, snakes, wolves)?
2
On Siren Head's sonic attacks
20
Plausible setting that requires a wearable flamethrower
1
How to have controlled forest burning with medieval technology?
7
Gaining The Engorgement Enchantment For Peasants