My world has a form of magic that is similar to telekinesis; that is, it makes things move. I also have technology that is essentially the same as today's real world.

Thinking about it, this seems like it could be really useful for powering certain sorts of devices. There is, in fact, a certain type of electrical generator that is powered by magic. It consists of a fixed-magnet rotor surrounded by one or more pairs of coils. The rotor has no axle or bearings; it is spun and held in place solely by magic. As a result, the generator can be fully enclosed with no exposed moving parts; is is very nearly "solid state". Of course, this means it necessarily produces alternating current (DC would require brushes), possibly in several phases, but solid state circuitry can easily rectify this into fairly constant DC.

(Alternatively, the generator has a mobile ring of permanent magnets which spins around a set of fixed coil-wrapped arms. I suspect this might actually work better, especially since the moving portion doesn't need an axle or bearings. The objective is to avoid brushes so as to minimize wear.)

How small can I make such a generator? Can I make it, say, the size of a 2032 watch battery? (At least, small enough to fit in a Smart Watch?) It should be able to generate at least 2 watts. Do any such devices (obviously, unlike my magic-powered generators, they would need an axle that can be externally driven) exist in real life?

Alternatively, is there some other way I can generate the required energy in the available size, using only the ability to make things move?

This isn't necessarily relevant, but... I've previously asked about this magic system here and here; those might provide some interesting details. In particular, magic is powered by the metabolism of living beings. For our purposes, what this means is that the generator has a constant supply of magic-energy as long as it is on or near a person (or, in some cases, an animal or other living source of magic). The generator isn't a "spin up once and coast" system; it is constantly being supplied with "fresh" kinetic energy via magic (when active; they can be made to have an "off" switch, and for safety and durability reasons, will halt themselves if separated from the person "feeding" the magic or if something happens that the rotor becomes stuck).

Also, and this happens to be extremely convenient, by nature of how generators work (and by how I imagine my magic working), a magneto-type generator will always provide exactly the electricity needed with fairly low waste. Specifically, magic causes the rotor to turn at a fixed speed, which translates into the amount of magic energy used to keep the generator spinning being directly correlated to the amount of electricity being consumed by whatever is connected to it. I can just spend the (very small) amount of extra magic to keep it spinning even if the connected device is off with minimal to negligible consequences. (Conceivably, there would be a delay as the flow of magic adjusts to changing power requirements, but this is what power regulation circuitry is for, and I need that anyway, at least in the form of an AC/DC rectifier.)

One easy generator to make is a faraday disk or homopolar generator. And it should easily fit in your specified 2032 battery dimensions. 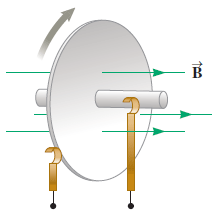 In the image the power is developed between the center axis of rotation and the outer edge, as the disk spins. These power sources generate a great deal of current at a low voltage and have been used to power welding machines. The drawback of this design is the rotating contacts.

For your application, since you have magic, you can fix the conductive disk, and rotate the magnets generating the field B shown in the image. Any permanent magnets will work for your application. To generate more power, spin the magnets disk faster. The faster you go, the more power you get. To get 2W out of the generate, you'll need to put in at least 2W of kinetic energy spinning the magnets plus any losses resistive losses in the disk.

The thickness of the disk is determined by airflow for cooling and the current flow delivered to the load. 1 mm of gold can carry over 40 Amperes of current safely, which is much higher than you are going to need.

Your buck-boost or resonant power converters can convert the output voltage to whatever value and waveform you need.

Not the answer you're looking for? Browse other questions tagged technology electricity .

12
Smart phones and claws?
8
Would a magic-using society create living batteries?
4
How can I meaningfully define the energy cost of magical levitation?

36
How far can a time traveller go into the past before his electrical equipment becomes unchargeable?
8
What level of tech if there was no copper?
5
How hard is it to build a generator if you've jumped to the distant past?
25
How would relatively cheap and abundant (but not free or limitless) electrical energy at an up-front cost impact society?
5
How can nuclear power produce -electricity- in space when energy must be converted differently?
10
Electric Universe: can an object be pinned at a solar pole with magnetic flux?
16
How to harness electricity from crystals?
2
An idea for a society's unique electricity and how it works
2
Can you generate DC electricity efficiently with pneumatic power?
20
Lightning-powered vehicles - are they possible? Are they realistically usable for everyday transport?