How can a race incapable of conceiving discrete quantities evolve?

Shamelessly inspired by this question, where a race was capable of counting only 0, 1 and ‘many’, I have designed a yet more extreme race!!

The Continuuoids are a pretty complex race. They can solve problems, they can build homes, they might even be intelligent.

But they have no concept of equality. As an extension of this they have no concept of discrete mathematics at all. None is smaller than some, but none is not really a different thing than some. In places the world is less like other places in the world, but it’s still the same world. Essentially the way they perceive the world is as a continuum, where discrete boundaries don’t exist and all things are actually just one thing.

You can imagine my descriptions here are a bit tortuous, as the concept of discrete items is so ingrained into humans that it’s hard to conceive of a world without it.

And that’s the problem.

Physics likes to split things into this/that. As a survival tool the ability to distinguish between ‘thing one’ and ‘thing two’ is pretty darn vital. Which makes designing a species without the ability to discern when one thing is not another thing very, very difficult.

What I’m searching for is a plausible evolutionary path that could lead to a problem solving species without this ability.

Ill rank answers by plausibility and simplicity. If this race is ‘intelligent’ (even if it’s difficult for a human to quantify how that is) the all the better.

TLDR: Their visual cortex evolved in a very different direction to ours

This is going to be extremely speculative, and it doesn't quite meet the specification of incapable of understanding discrete quantities, but it comes the closest I can think of. Further disclaimer: I am not an evolutionary biologist.

The human visual cortex is very good at a number of complex tasks such as pattern recognition and edge detection. We are very able to quickly process this image and label the main discrete parts of it as the sky, the sun and the sea. 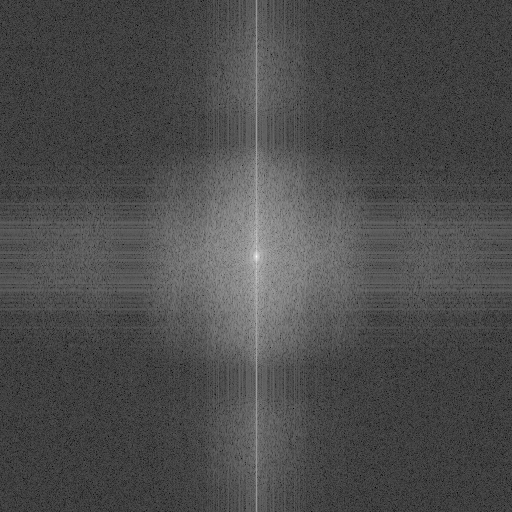 What has happened here? Well, it turns out that the Continuuoid visual cortex processes information via a Fourier Transform. Effectively, their brain takes the signal from the rods and cones in their eyes, and passes it through some sort of neurological structure that breaks the signal down into a collection of individual sinusoidal-waves. The Continuuoids perceive the amplitude and frequency of these waves, which are all continuous variables.

Why would such a neurological structure evolve? Take a look at the two following star-fields. 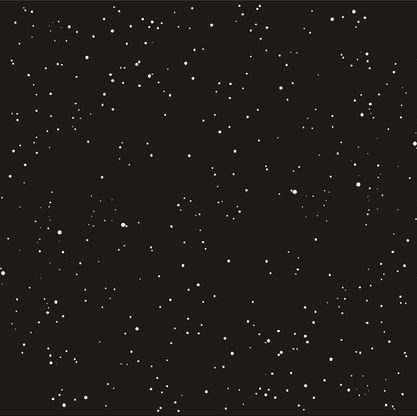 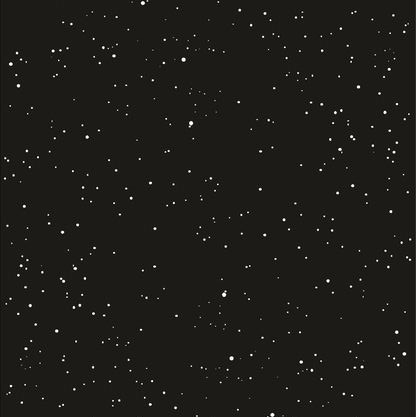 If you are looking at these through regular old human-vision, it may take you some time to realise that these images are the same one, just rotated by 90 degrees. Lets look at the same images after they have been passed through a fast fourier transform (FFT): 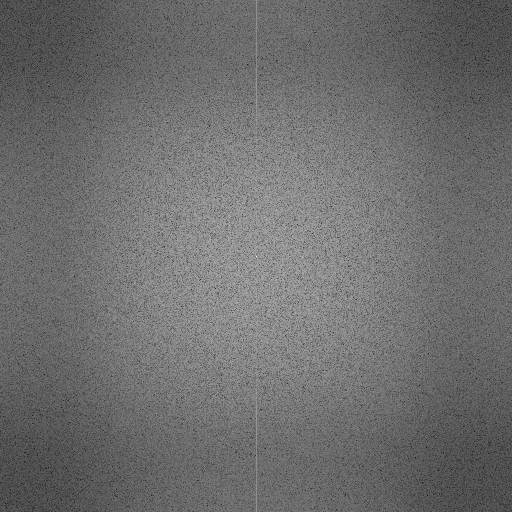 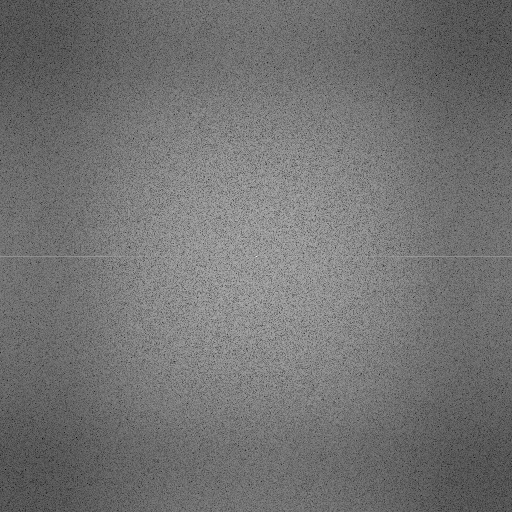 There is a thin grey line, that is vertical in one picture and horizontal in the next. Effectively the FFT encodes the symmetry of the picture very clearly. This means the orientation of the image is obvious in an FFT. This is very useful if you are trying to navigate by regular features when you are unsure of your own orientation. This is why human engineers use FFTs as part of navigation systems which determine position from star-sightings.

In their evolutionary history, the proto-Continuuoids were a species that faced an evolutionary pressure to navigate long distances accurately by visual sightings alone, and with uncertain orientation. Perhaps they were once flying creatures on a dark world with good star visibility, but strong and unpredictable winds. Perhaps dwindling vegetation caused there to be a pressure to roam further and further afield, while still requiring returning to specific spawning grounds. There are lots of ways this could happen, but this is a somewhat hand-waved way. Through some chance mutation, their existing neurological structures became better at decomposing star-field signals into a limited number of waves. This allowed some of them to find their way back to the spawning grounds more efficiently, and pass on their genes. This is an example of an evolutionary pressure which drove their visual cortex to get better and better at emulating a Fourier transform. This is all wild speculation, with little to back up how possible it could be, but it's the best I can think of.

FFT's have been known about for a long time, and can be performed quickly and efficiently, even using older analogue electronics. I think it is within the bounds of possibility that that a neurological analogue of an FFT processor could evolve.

Although FFT's are used for edge detection, that isn't necessary for species survival. You don't NEED to know the precise boundary between the predator and the forest in order to know that you should run away. You just need to know that something big is getting closer, and the last time your visual cortex picked up that particular cocktail of frequencies, something much like yourself mysteriously vanished.

It seems plausible that if they later experienced the evolutionary pressure to become more intelligent, then the neurology of their visual cortex would influence how their conscious minds developed. They wouldn't see a rock and make it into a tool. They may instead perceive an amount of "rockness", which they can convert into an amount of "toolness". It stretches the bounds of how we can describe it, but it seems reasonable that if they only see in quantities of frequencies, then all they perceive is a mish-mash of different semantic quantities everywhere. They may not even have a fixed boundary of self. They know about the world the most where they are, and they know less about things further away. Therefore, they construct the idea that there is a local maximum of "me-ness" that tails away the further you go.

I would assume that eventually they stumble on the idea of discrete quantities, as it is still a viable way to look at the world. Their equivalent of classical philosophers may play about with the idea, only for it to be put on firmer mathematical footing in their middle ages and early modern times. Their understanding of mathematics develops similarly to our own, but in a very different order. Perhaps infinitesimal calculus was developed in antiquity, but modular arithmetic was only invented much later. Eventually, Discrete Number Theory (DNT) proves a useful conceptual tool, and kids are taut it in Continuuoid high school, complaining about how they will never use this in day-to-day life. Scientists engineers and mathematicians are all aware of DNT, but try to avoid using it if they can, because it's awkward and counter-intuitive to them.

The continuoids live on a tidally locked world with no long term bodies of water, just occasional puddles. As a result, multicellular life never learned to swim, and without the stepping stone of swimming, evolution was not able to leap from stationary life to walking or slithering. Mobile animals never evolved: instead for billions of years their world only had plant and fungus analogues. Plants and fungus evolved roughly like they did on earth, but slime mold, without any predators able to match it in size, took off in a way that it never did on earth. All mobile entities on the world are slime molds, of various sizes and intelligences.

When continuoid slime molds meet, they have no sense of cooperating while remaining distinct entities: instead, their options are to fight until one lives and the other dies, or touch without aggression, allowing their nervous systems to sync and their memories to join, and become one consciousness. This decision is made based on genetic similarity of the two blobs, and is not a conscious choice. They also freely split in two, knowing that they can rejoin any time. Hence, the way to define individuals is by genetic similarity, not by whether they are physically and mentally connected, because those connections are ephemeral.

Eventually, their world is ruled by competing 'individuals,' where each individual is composed of thousands of tons of slime spread over several hundred square miles of territory, with pieces moving around that territory accomplishing various tasks. Other species may live in that territory, but they are subservient and not intelligent, as any intelligent upstarts would be destroyed by the dominant slime in the area, or overthrow it. These individuals are each genetically distinct and "sexually reproduce" within themselves, cell to cell, but not with other individuals. They have significant intelligence in order to better wage war along each boundary, understanding quantities such as tons of sugar, square meters of planted area producing food, or tonnes of slime mold available for combat in a region. Using this understanding they can make complex plans, taking into account natural laws and interactions between their enemies: they have what humans would recognize as "theory of mind." It is this theory of mind that drives them to greater and greater intelligence. However, nothing they encounter is indivisible.

Crucially, these territories are large enough that viable individuals control territory spanning the entire habitable belt of their tidally locked planet. Thus, when planning war, there is no sense of "My enemy shares a border with seven enemies, while I only share a border with five. This is to my advantage." Instead, each slime has two neighbors, one to clockwise and one to counterclockwise, and since this number never changes there is no need to count it. In addition, in their tidally-locked world, there are no seasons or days to count: instead, they keep track of time in continuous units, having an innate understanding that "47 hours * 1 acre of farmland * .05 tonnes of food per hour per acre, yields 2.35 tonnes of food", for example, instead of a more human understanding like "one banana tree yields about 70 bananas during a summer." Instead of having "47 sheep", they would keep track of "20.47 tonnes of the subservient species that secretes wool".

Not the answer you're looking for? Browse other questions tagged evolution xenobiology mathematics or ask your own question.

18
How can sapient beings engineer transportation and building when they can only count 0, 1 and many?

7
How would aquatic sapience evolve?
110
Would intelligent life evolve any other body plan than humanoid?
10
Could human beings evolve to have longer gestation periods? If so, how could this be done?
3
Plausibility of another extremely intelligent species evolving who finds the remains of our existence and emulates our society
8
If humans were transplanted to a different Earth-like world that they didn't evolve on, how would they deduce how they came about?
3
How does this dragon's self-defense mechanism not burn the user?
1
Possible explanation of amphibious abilities
12
Implications of a Race which becomes Smarter when in Danger