A “time capsule” that can last for trillions of years?

The universe is dying because it has exhausted nearly all of its resources. Humans became the last species in the universe because of their resilience and sheer willpower.

And yet, humanity still doesn’t want to die. Relying on the Big Bounce Theory, scientists developed a sort of “time capsule”. It was designed to hold up to 200 people, plant seeds, and animal dna. The people, seeds and animal dna would probably have to be frozen for trillions and trillions of years until another Big Bang was to happen.

Requirements for the “time capsule”

How is it possible that a universe that literally has no more materials respawn???

But that’s besides the point, the most important question; how do I design, build and finally, “pilot” such a thing?

Ps: this is a crudely drawn representation of what I think may happen: 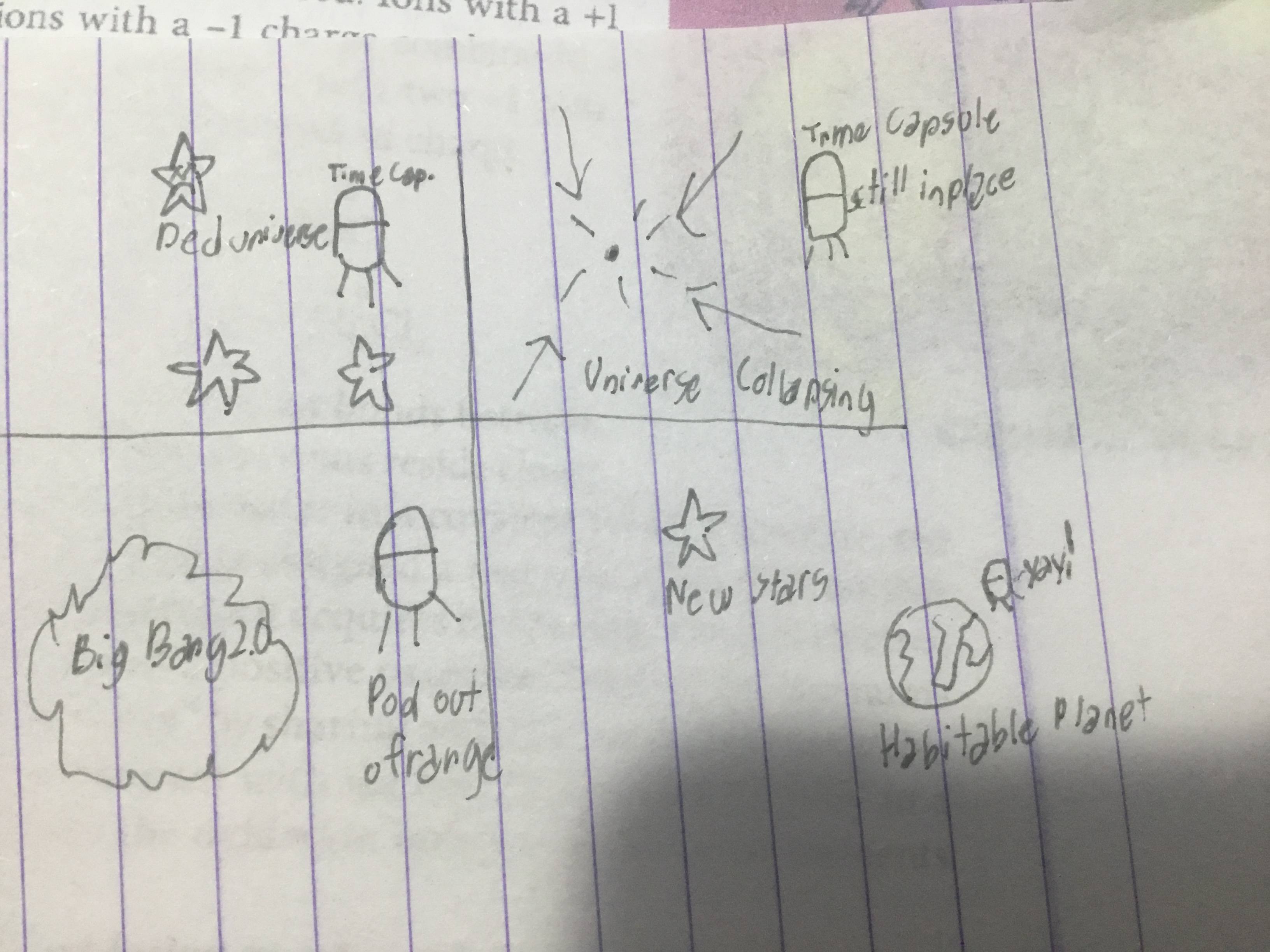 science-fiction spaceships universe vehicles
Share
Improve this question
edited Mar 5 '20 at 8:27
In the name of the story
asked Mar 4 '20 at 9:07

Instead of trying to freeze something for that long and have it remain viable, I would suggest that you could consider hiding away under the event horizon of a rotating massive black hole.

There are a lot of interesting things you can potentially do with black holes that I won't go into here, but there are a few important things.

In our universe, it would appear that once you've crossed an event horizon that's where you'll stay until you get reduced to a spray of radiation by the eventual collapse of the black hole in the far, far future.

In your Universe 2.0 though, magic exists, and that means there's scope for travel through an event horizon. You tweak that particular bit of handwavium to prevent time travel, but (possibly limited) FTL would be just fine, and so the contents of your black hole can simply pop out when it seems like a good idea.

Discovery of the news laws of physics can be made by the "time capsule" spaceship inside the event horizon, which can then cross the event horizon and investigate the new universe. If nothing interesting is immediately available, they can return to the highly time-dilated orbit they survived the end of the last universe in and allow large amounts of time to pass outside until the local environment becomes sufficiently benign or interesting to make it worth leaving for longer periods of time.

Scientists learn how to create pocket universes. Being a separate universe even if somewhat compact, it's time flows differently to the main universe and can be controlled. This means the inhabitants can be effectively frozen in time and sample the main universe once for a fraction of a second every billion years or so time is effectively sped up passing a trillion years every minute or so.

Once a new universe forms, time can altered down while searching for a new planet or materials to create a new human habitat.

Pocket universes are a common trope in many scifi and fantasy series from Doctor Who to Dungeon and Dragons.

You're already talking about Human society existing towards the end of the universe. This is an excessively long time by any standards to even think that current technology has any real meaning. So a major handwave in the style of any technology sufficiently advanced is indistinguishable from magic is probably acceptable.

Examples of such handwaves from existing fiction are;

Don't try to pass any physical objects forward into the next universe. Instead, use the new universe as a machine to make them for you.

Humanity creates a device which predicts (or causes) a new universe. The device perturbs the state of the early new universe just ever so slightly and perfectly to ensure a habitable planet forms around a habitable star upon which evolves humans, plants, and animals.

The calculations required are outrageous, but if humanity (or whatever counts as humanity) has survived the $10^{40}+$ years into the Black Hole Era their technological advancements and computing power would be equally outrageous.

A similar idea is used in Greg Egan's Diaspora where...

Alternatively, humanity perturbs the new universe to leave the plans for itself in the Cosmic Background Radiation in the hopes that a future advanced civilization will find those plans and recreate humanity.

If they're really good and really specific, they could recreate an exact duplicate of people at the moment of their encoding including all their memories; presumably with some tweaks to survive in the new universe's physics. In effect, humans would "go to sleep" in their old universe and "wake up" in the new universe. Like the philosophical Swampman which is an exact duplicate of, but has no continuity with, the original person.

If you are have an infinite universe, there is no need for a time capsule.

The Poincaré recurrence theorem already guarantees that given an infinite universe (or equivalent) any given state of existence with be repeated an infinite number of times. So, you can count on the reproduction of our world with the same people on it having our memories too. One could quibble that this is not the same thing, but those in that other universe will believe it to be the same thing, including version we they remember having built the time capsule and living through the big crunch and big bang.

Try to remember that infinite is not at all like just having lots and lots of zeroes.

Not the answer you're looking for? Browse other questions tagged science-fiction spaceships universe vehicles .

2
Size of time loop required for development
1
Escaping the universe
1
Material for container that survived the Big Bang
1
Is there any other material that can be used to make tires?
2
Can this underground culture survive for 200 years
19
Would it be possible to hide a spaceship for 30 000 years in a cave on Earth?
16
What would the scientific explanation be for an energy source that can last 130,000 years?