How would medieval people go about slaying gryphons?

So, there are a lot of questions about dragon slaying, so now let's cover gryphon slaying.

Both dragons and gryphons are Air-type creatures in the Creaturemon Index (basically my encyclopedia for fantasy creatures) and are usually hunted for the same reason: petty theft of food items (the largest item has so far been a single sheep) and (accidental) property damage.

Gryphons are hexapodal creatures, posessing two wings and four legs. The general body-plan resembles that of a cheetah and measures 135 cm at the shoulders. Their heads, however, bear resemblance to various eagle and a few corvid species. Soft, fur-like plumage covers their head, neck, the upper parts of the forelegs, as well as the chest area. The lower parts of the forelegs are covered in yellowish scales. All four legs terminate in large claws, similar to that of a harpy eagle.

Gryphons are supreme soarers with limited capacity for powered flight. They can't take off frequently, so they usually save it for emergency.

Much like dragons, gryphons employ hit n' run and kiting tactics, along with attrition (i.e: circling around the hunting party and watching their suffer from a safe height) The main difference is that while gryphons are smaller and more vulnerable than dragons, they are also more numerous, more agile, more active and proactive, compared to their scaled competitors.

In layman's terms, instead of fighting Geralt of Rivia on the ground, the (usually five) members of a gryphon pack/family take turns showering him with small rocks, tree branches and unnaturally large bird droppings while also leading him into the den of a tax collector.

Just like dragons, gryphons posses human levels of intelligence and are able to communicate with one another through squawks and caws. They also regularly use this site.

Gryphons are considered pests and are hunted for that reason. However, I can't figure out, how could such creatures be effectively hunted by medieval people?

As I said, gryphons are intelligent and existed long before humans, so they're able to relocate their nests, eggs and young, should the need arise. Stolen goods are only a fraction (in mass) of what a gryphon eats, so they can go without raiding for quite a while.

Because they are as intelligent as humans, your typical traps such as baited snares would be pretty ineffective, and actively attacking them would probably tend to end in the Gryphon's favor. The best solution would probably be poisoned live prey.

Catch some of the animals they like to eat most and spread some deadly poison on the fur, then release them back into the wild. To the Gryphons, the poisoned free prey would be too difficult to distinguish from good prey and not nearly as obvious as a random steak hanging from a hook or live animal tethered in a conspicuous open space with no one around.

You actually would not need to do this very often, after a few die off, they would quickly associate humans with poisoned food supplies and learn avoid human settlements all together. 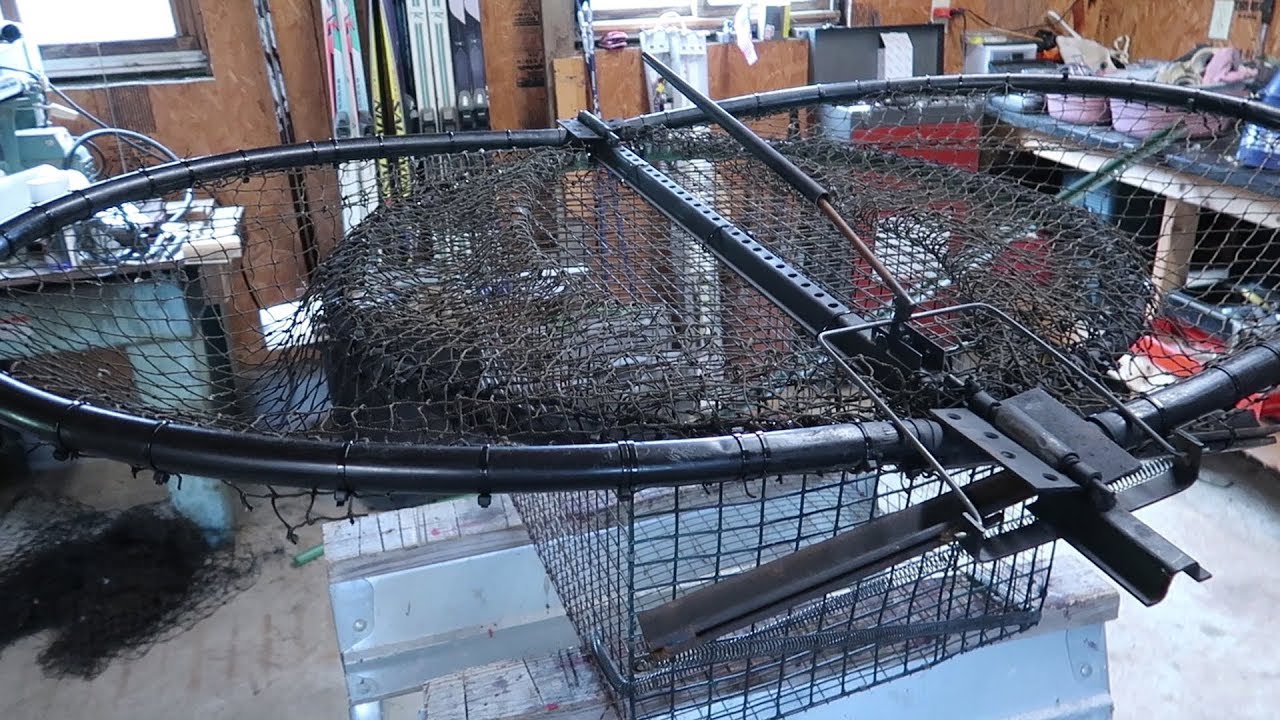 When a gryphon tries to take the prey, the trap springs and nets bind the gryphon’s wings, keeping it earth bound and vulnerable. The hunters then spring out and attack it to death with spears, axes, and mattocks

Dust the coat or feathers of tethered tasty gryphon-treats (goats, chickens, etc) with alchemical compounds made from mercury, thallium, and lead. Theses materials are cumulative neurotoxins and will weaken and slowly kill the gryphons that take the bait.

This one is unconventional. Dig a wide deep pit and bait with tasty treats. The pit has wood, oil, pitch, and tar coating the bottom. When a gryphon lands in the pit, light it on fire. The hot air is less dense and will make it hard for the gryphon to fly out. The beating of the gryphon’s wings will splash hot tar and pitch all over the gryphon, and fan the flames of the fire, further reducing the lift capacity of its wings. The pit traps combustion products and the gryphon suffocates — maybe.

Highly trained peregrine falcons -- agile and fearless, trained to swoop past and pluck out a few flight feathers, so the gryphon can no longer soar and slowly descends. The human hunters do the rest.

The gryphons cannot to anything about the peregrines, which can outmaneuver them every time, so even a pair of falcons would be an unassailable advantage for the hunting team.

Peregines are trained by flying against captive gryphons captured in previous hunts and persuaded to co-operate in return for their eventual freedom. (Pic shows our local peregrines on St Luke's Church, Norwood) 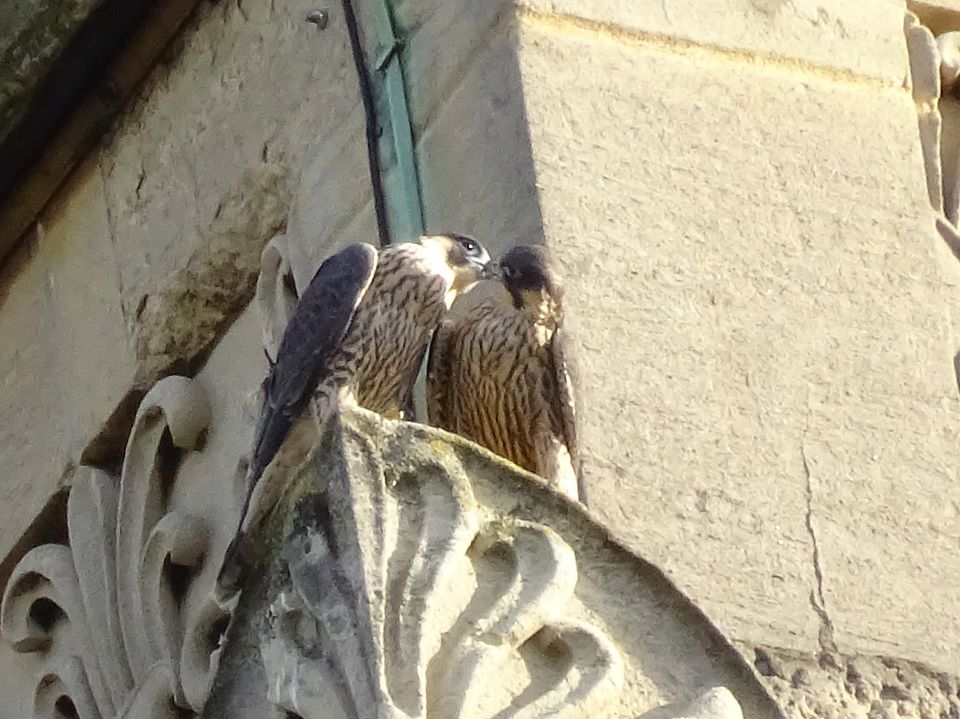 They would be fairly hard to track. Due to them flying, they could go anywhere without the humans being able to follow their tracks. The best way would be word of mouth, they would set out on a hunt when they heard word of an active pack.

My preferred tactic would be a large blanketing group. The best way to fight a group, is with a bigger group. However, not just any group, due to their intelligence a group of angry farmers with pitchforks isn't likely to do well. Perhaps there will be witcher-like groups providing a "pest control" service. They would be highly trained and demand a fair price.

They could wield spears for ground assault, shields where necessary. Bows or crossbows with roped arrows would be your most valuable weapon. Hit them with one roped and barbed arrow, and you can pull them down and fight them on the ground. From then it's nets and spears.

Perhaps you could employ catapults or ballistae with netting ammo. But depending on their manoeuvrability this might not be very effective.

What comes up, must come down.
There are few methods to catch/kill birds.
First is to track their nest. This is so old that Torah have even name for it Shiluach haken. And it describe scaring mother from nest to take away her eggs or youngs.
You can also wait above the nest and when the adult griphon arrive go gull mammoth hunting on him. Throw big rock and spears at him.

Second it go at them at face value and show them who's the boss. If they are intelligent they should get the message that humans are not one to mess with. Siberian bear hunters had not only fancy dress to for he job 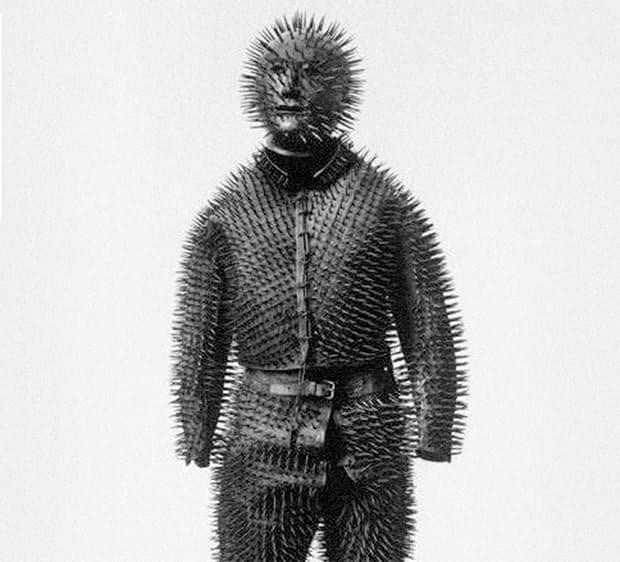 They also had a specific method. They enraged the bear to charge, then they kneeled with two knifes in hands in a way that bear impaled himself on the blades and any movement (to escape from pain) was to inflict further wounds.
I've read that the strongest hunters used one longer knife positione in a way that it went to the brak through lower jaw.

Last, the milking cheater method. Arrows and tar/fire. Tar make flying very hard. So it fire (plus additional damage). So as long as amount of arrows per second is higher than amount of Gryphons you could take whole flying pack down.

3
How would gryphons go about defending themselves against humans?

8
Are my wing-walking griffins viable?
14
Dragons have an armor that is similar to that of sungazer lizards. Why would the dragons have the spikes as well?
7
How much aqua regia should a dragon store?
6
A dragon, a gryphon and a tengu are flying toghether. How can they actually communicate?
2
How could dragons use their forepaws as hands?
3
How would gryphons go about defending themselves against humans?
4
Increased flexibility for dragons?
1
How could dragons and gryphons reduce their hitbox?
6
Unique take-off strategies for six-limbed creatures?