What can I expect these humanoids to look like?

I am designing a race of human-based creatures for my story. This race has developed as regular humans until roughly 500BC until an event forced them to start living underground for several centuries.

There they have lived as primarily hunter-gatherers, mostly focused on survival and reproduction, trying to breed a population large enough to populate a surface continent the size of Australia. They mainly survived on underground prey like rats, mice, and insects, and vegetables like roots and fungi.

Due to them living basically as primitive cavemen underground, I am assuming their development and bodies will have changed quite a bit. Due to the presence of magic in this world, there would be other significant changes as well.

Magic is a factor too. This related question explains in detail how this magic works, and they would mainly use this for the telekinetic properties and the real-time clairvoyance.

These are the assumptions I have so far:

Skinny
Resources are scarce, and due to their large population, they will have to share quite a bit. In my world, enough natural underground resources are available, but not abundant. Therefore I expect them to look extremely skinny, almost skeleton-like, as they only eat the bare necessities to survive.

Blind
Due to them mainly using magic to see in the dark caves, their race will either have gone completely blind or will be extremely sensitive to light to the point of it hurting them.

Weak
They will be extremely weak as they are near-constantly malnourished, but also use magic for most manual tasks.

Skin discolouration
Due to them living underground for centuries, I think their skin color would or could change to greyish white.

Am I wrong about any of these assumptions, or there anything else I can expect that I have missed? Are there any strengths they could have developed apart from deteriorating underground?

Evolutionarily speaking, 2500 years isn't very long. So you're right that changes would be minimal in terms of their basic human form. These changes I think are fine:

Blind
Underground there'd be no distinction between the blind and the sighted. In our society, people with ever-worse eyesight are still reproducing due to advances in vision-based technology (my own eyesight is terrible). In a society that doesn't need eyesight at all, even total blindness is not a disadvantage so that trait would get passed on much more and much earlier. Many children would probably still be born with functioning eyes, but these would atrophy with disuse as the children grow, and all adults would be effectively blind in a lit environment.

Skin discoloration
Depending on your melanin concentration, skin color can change a lot even within a single lifetime. A person with light-colored skin who encounters very little sunlight will have very pale skin; a person with dark-colored skin will have the same effect, but less pronounced. It's not unreasonable to suppose that even dark-colored skin tones in a totally lightless environment would become ever lighter in subsequent generations, especially if there are different tones that interbreed.

These changes I think are wrong:

Skinny
Not necessarily. The evolutionary advantage of being long and thin is that your surface-area-to-volume ratio is higher, meaning your body can dump heat faster. Depending on geography, this might be the opposite of what you would need to survive underground.

Cave temperatures vary by location, and approximate the average yearly temperature for the region. Tropically-located caves might be a constant 35°C/95°F, while a northern cave might be more like 10°C/50°F. If your underground society is more northerly located, expect them to be short and stocky (to maximize volume and minimize surface area).

Weak
If they tend to be physically weak, it isn't because of scarce resources. Malnutrition might be a persistent problem for a few generations, but over time the population will adjust based on the resources available. It's hard to survive as a species if you're always starving. Weakness in a society like yours would come from not doing much physical activity.

WARNING: This answer has spoilers from a movie.

They would probably look like the humanoid cave creatures (called crawlers) from the movie The Descent. The movie is about a group of women who goes to a caving expedition. They become trapped in the cave and hunted by a breed of predators. These creatures evolved for thousands of years, so you would need to change your timeline.

Here is an explanation from the director/writer:

The humanoid creatures, referred to as "Crawlers" in the credits, are, according to director Marshall...

cave men that never left the cave; they evolved over thousands of years, living down there in families. They've lost their eyesight; they have acute hearing and smell; and they function perfectly in the pitch black.

It is shown and implied in this movie, as well as the sequel, that the Crawlers do, however, come to the surface to hunt animals such as wolves, deer, etc., and to bring their carcasses back to the caves for food.

Here is how they look like in the movie (maybe you can make them look less horrifying as they are in a horror movie): 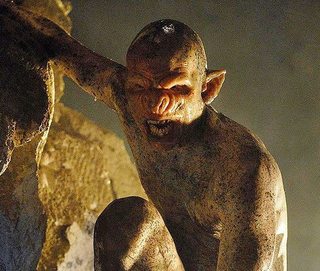 You can also check the features of troglobites (species that live in underground habitats/caves).

In addition to skin discolouration mentioned above, they would likely be significantly smaller than their surface cousins within a few generations:

Early animal studies by Cowley and Greisel over three generations, and by Chow over two generations, demonstrated that the nutritional status of the rat mother had effects on the growth and development of subsequent generations of rats. Later, by Bresler and Zamenhof lengthened the time frame of their study and also expanded the research criteria to include behavioral parameters. In studies that extended to ten generations of both maternal and paternal malnutrition, these investigators demonstrated increasing growth and behavioral deficits over each subsequent generation. In a parallel series of studies, Stewart et al similarly reported a pattern of increasing growth deficits involving both body length and weight in rats with up to twelve generations of moderate protein malnutrition (8% protein diet versus 25% for controls). – The Intergenerational Effects of Early Adversity (This study also cites various studies finding intergenerational cognitive and behavioural deficits in humans even after one generation.)

Birthweight is correlated across generations and short maternal stature, which reflects intrauterine and infant growth failure, is associated with low birthweight, child stunting, delivery complications and increased child mortality, even after adjusting for socio-economic status. – Intergenerational influences on child growth and undernutrition

This report from the UN Standing Committee on Nutrition (PDF) maps out an intergenerational cycle of 'growth failure' as malnutrition and early pregnancy (to be expected in 500BC) lead to low-weight babies, underdeveloped children, and smaller women having smaller babies: 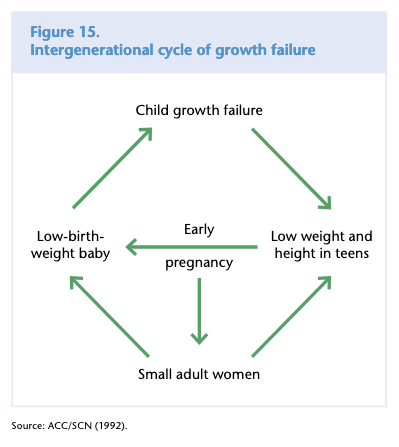 Not the answer you're looking for? Browse other questions tagged biology magic creature-design survival humanoid .

4
How can this magic system be used most effectively/creatively?

18
Science behind a naturally invisible creature
10
What would the eyes of a cave-dwelling race be like?
28
Why might dwarves be black skinned in a medieval fantasy world?
11
Could human beings evolve to have longer gestation periods? If so, how could this be done?
6
What would the physical effects be to Elves if they began living underground?
4
Is it Possible to keep an egg alive for centuries?
2
Realistic look for subterranean humanoid race
4
How can this magic system be used most effectively/creatively?
8
Why Would Naturally Evolved Monsters Have Weak Points?
8
What is the most plausible way for an organism to have (limited) shapeshifting abilities?