Ask Question
Asked 12 months ago
Active 12 months ago
Viewed 65 times
1
$\begingroup$
This question already has answers here:
How many people are necessary to maintain modern civilisation? (14 answers)
Closed 12 months ago.

I am currently writing a book about a pandemic. If you want more informations, see my previous posts here and here.

Imagine a bacterium with a very high infection rate, so that within a year, most people (>50%) are infected.
If the disease had a mortality rate of n, around n*N people would die within the year (N = total Population).
Perhaps a few less, because of herd immunity etc.

However, when enough people die, this is no longer true. When there is no medical staff to treat infected people or more importantly not enough people working in food production, or important and irreplaceable people like high level politicians die, more people than predicted by the above equation would die.

Our food production and society in general relies massively on efficiencies of scale. Meaning our society could exist in the same way it does now, if only half as many people lived, but the proportions of professions stayed the same.

So my question: How many people would have to die (or be sick enough to be out of work), for society as a whole to fall apart? Are there any historical examples for catastrophes on this scale? (natural disasters etc count too)

Well over a third of the population

When we studied Thucydidies a few decades ago (staff college) the plague in Athens during that time period of the Pelloponesian War (400 BC-ish), during a siege, was a source of some mystery in re "what disease was this?" (was it a novel virus, bacteria based infection?) - a mystery that was being slowly solved thanks to some deep research. (I had some articles on that which are either in the attic or got lost in a move)

What struck me at the time that we studied this stage of the 30 year long war was that almost a third of the population of Athens was thought to have expired thanks to that plague - and Athens still survived. Granted, they didn't win the war.

For your purposes, and considering the social dislocation in Europe during various waves of the Black Death / Bubonic Plague, a threshold somewhere between 1/3 and 1/2 of the popluation succumbing looks like a decent tipping point ... but you'd need to include a few seasonal and climatic factors, as well as tech factors.

Diseases don't happen in a vacuum. Some cultures and societies are more reslient to stresses than others.

I'd suggest not assuming a uniform distrubution of death across the population: that assumption would actually make it easier for a social group to whether the storm. I'd look particularly at the problems of how urban population concentrations are far more susceptible to large death spikes and spreading of the disease. 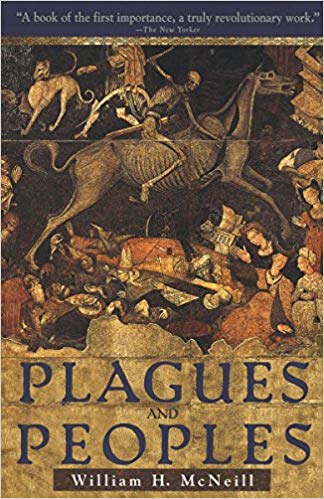 (which I read about nine years ago). It describes the danger of urban concentrations in spreading disease, but also how the benefits of urban concentrations can achieve the critical mass of brain power (in a cultural development sense), and economies of scale, to figure out how to cure / innoculate against a disease once a certain level of tech is achieved.

Part of your answer to your question form a world building perspective is: what level of tech is the society/culture that I am working with?

As an aside: if you do want to get your hands on that book, make sure that you get the edition that includes the treatment of the HIV/AIDS spread. The original edition was published before that was as well understood as the later edition, which has a section devoted to that particular disease.

Not the answer you're looking for? Browse other questions tagged science-based biology society warfare economy or ask your own question.

41
How many people are necessary to maintain modern civilisation?
12
what makes a disease deadly?
0
ideal virus for eco-terrorist

4
What forms of ammunition/munitions could people realistically manufacture or recycle when modern infrastructure and society is collapsing?
47
Is this alternate history plausible? (Hard Sci-Fi, Realistic History)
6
Minimum Population For a High Tech Society?
1
Animal husbandry in post-zombie apocalypse Great Britain
7
Would an earlier HIV pandemic be a realistic, plausible historical apocalypse scenario?
4
Strategy for a class of manipulating magical teenagers to stay in power