What is the science behind a wave that changes the laws of physics?

So I remember reading a long time ago about how a theoretical "wave" could exist, as the laws of physics suddenly changed in one place and then this rippled across the universe, basically at the speed of light (keeping in mind that this would most likely destroy everything) and we'd pretty much have no way of knowing.

I wanted to make a story based on this and after extensive research I haven't been able to find any good evidence for that so I'm not sure if I just didn't remember it correctly, or if I dreamt it, but if there's a way to make it physically possible, then that'd be awesome.

I guess my main inspiration kind of is the music video for 2nd Law: Isolated System which, I know, is probably not an accurate representation of what it would look like since people are able to outrun the wave, at least for a short while.

But yes, the bottom line is: what would be the science behind this. Is it possible? And what would cause the shift at the start?

Addendum: I am pretty certain it was completely different from strange matter and strangelets in neutron stars so we're looking for something else, although that could be an interesting basis for multiple stories and, depending on how slowly it would consume the Earth, it could be an explanation for the wave in the video. But still. I'm looking for a laws-of-physics-changing wave.

The fundamental idea is the "false vacuum."

There are motivating examples of this. Consider a material in which the atoms each have a small magnetic moment. These atoms will be at lower energy if they all align, as compared to if they are all randomly oriented. This will mean that a non-zero magnetic field is lower energy than a zero magnetic field. However, if a large part of such a material "freezes in" with the atoms pointing in one direction, and a neighboring part does so with the atoms pointing in a different direction, there will be a boundary. At this boundary, the atoms will be unstable, sometimes flipping one way, sometimes the other. 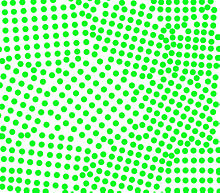 If one region starts to flip-over to match the next region, then the energy released can be significant, and it can propagate over. This is the idea of a cosmic boundary. As this boundary moves it can release copious amounts of energy. The released energy can destabilize the boundary further.

In addition, as the wiki article presents, it is possible for a region to have fallen down to one lower energy, but for there to be a still lower energy available. 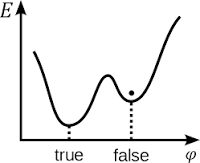 If a region was in the false vacuum, it might be relatively stable. The barrier to the true vacuum might be quite large. However, a large enough "kick" of the right type might cause the local field to jump to the lower state. This would release enormous amounts of energy. When I say enormous, the difference could well be comparable to nuclear matter densities, and be released through a galactic size volume.

Now, how does this change physical properties? In the false vacuum image, you must imagine that the $\phi$ is really more than one dimension. So the minimum is actually a ring, not a point. There's that Mexican hat again. 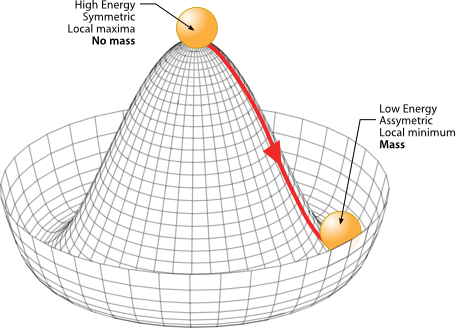 The parameters that correspond to the place around the ring are the fundamental constants of physics. Things like charge, mass, etc.

(Falling off that central peak is also one idea of where the matter in the universe came from, and drove the Big Bang. But that is really getting into a lot of very complicated cosmology. It's stuff I'm barely aware of, even with my PhD in particle physics.)

The idea is, the minimum could be anywhere around the ring. The choice of where it goes is randomly selected through a process called "spontaneous symmetry breaking." The specific location determines a lot of things like the ratio of an electron's mass to a proton's mass, the mass of a neutrino (if it's not zero), the ratio of strength of gravitational force to electrical force to strong and weak nuclear force, and so on. If a boundary region moves you from one spot on the ring to another, then these parameters could change. So suddenly, any matter in the region that previously was stable, might suddenly be unstable. Not just chemically but the nucleus in the atoms might fly apart. Or Newton's gravitational constant could change radically.

I am going for the answer here because I think I just googled what you described: https://www.livescience.com/47737-stephen-hawking-higgs-boson-universe-doomsday.html

"Hawking is not the only scientist who thinks so. The theory of a Higgs boson doomsday, where a quantum fluctuation creates a vacuum "bubble" that expands through space and wipes out the universe, has existed for a while. However, scientists don't think it could happen anytime soon."

However, with this bubble expanding at the speed of light so you would not see it coming, which makes it unfit for any video purposes.

Not the answer you're looking for? Browse other questions tagged science-based physics .

13
Is it possible to make a logically consistent set of laws that produces physics similar to that in superhero comics?
7
How can a substance that doesn't follow the laws of physics look and feel like ordinary matter?
29
In modern world, what is the largest building that could be built overnight?
9
Sci-fi Science: Physics of Impossibru: "Force fields"
12
What are the consequences of using limited anti-gravity for steampunk-style airships?
5
How fast would strange matter conversion go?
1
Breaking the Laws of Thermodynamics without Invoking Magic or the Divine