How to build undefeatable army? [closed]

Undefeatable army is nonsense - every army may be defeated. It is only matter of way how to do it - and time when this way will be found.

Crimson cavalry has reputation of undefeatable army. Its main force is in heavy cavalry. Its negligible advantage is in soldiers' body building, equipment, training - and reputation.

Body building: Soldiers pass training and live in barracks - but still they do job they did before they enlisted to Crimson cavalry - but now for Crimson cavalry. Almost all of them are smiths.

Equipment: Soldiers use special large hooded cloak that has scales and rings (made of tough but light material called desert steel) between two layers of (crimson dyed - here is origin of army name) cloth. So, enemy suffers from unpleasant surprise that cloak is not what it seems it is.

Education: Crimson cavalry is only one fully professional army. Soldiers pass not only body building, but also education of many things (tactics, various fighting skills).

Reputation: No one knows origin of such reputation - at least at this time. (because I have not prepared it yet, if it is needed)

Question: What factors (and how much) affect army undefeatability?

When the army is just, it cannot be defeated. Justice is undefeatable. One who is just will be victorious, because he has chosen truth.

Only a fully mature human being can be just. In order to reach full maturity, one must go through and pass all tests of life. This is possible in association with a master or one has proven himself on the field of life. The master will test his students with all kinds of harsh physical and emotional tests that they will have to go through. He will teach him discipline and right view of life and warfare.

Those mature students who have been approved and recognized by the master will be endowed with highest intelligence and powers. They will be the most skilful warriors with pure hearts and keen intelligence. All their feats will be perfect and successful.

The ancient Spartans were close in conception to what you describe, and were considered invincible in battle until late in the Peloponnesian War. Several factors worked in their favour:

However, several other factors worked against them. The population of "Similars" gradually declined as Spartan laws made it easy to eject people from that social class, but virtually impossible to raise people up. Sparta's self imposed isolation also meant that they gradually began to fall behind the other city states, Athens in particular with her extensive overseas trade and economy that was decoupled from farming. Spartan armies were decimated on Pylos, where poor intelligence and use of terrain allowed light troops from the Delian league to surround and defeat the Spartan Phalanx. After the Spartan victory in the Peloponnesian War, Spartan governors in the conquered territories made a hash of ruling, generating opposition when the Spartans were spread thin. Finally, the Theban Boeotarch Epaminondas experimented with the tactical formation of the Phalanx, developing new methods which broke the Spartan army at the Battle of Leuctra (371 BC), then leading a massive army of Theban and allied troops into Laconia and stripping away the Spartan Helots, breaking Sparta's political and economic power.

So long as your army resembles the Spartans in the period before 371 BC, then they are likely to continue to have an aura of invincibility. However, it is difficult to see how they can remain relatively isolated and "mysterious" without becoming static and having their equipment and tactics slide into obsolescence. Indeed, the reputation of the Spartans is what drove innovative thinkers like Epaminondas to develop new tactics to defeat the Spartans (similar things have happened in other wars, such as the use of professional archers by the English in the 100 Years War to counter the French knights, the development of the "Light Division" by the British to defeat Napoleon in the Penninsular war, Emory Upton's innovative tactics to break the stalemate caused by rifled firearms in the Civil War or Hutier tactics in WWI).

As noted, no army can be undefeatable forever, either their parent society can no longer support them or they are overtaken by economic, technological or even demographic changes by their opponents. Unless you have a way "in universe" where they can stay ahead of their adversaries and prevent decay in their own society, then there will come an inevitable end.

Perhaps an undefeatable army is not an army at all

Throughout history, nations create armies and forces that achieve a goal, or mission.

Certainly the following will help:

Can the mission (which could simply be protection) be accomplished in all situations? Even if initially a nation has all of the above to a superior standard, there are situations which even the most perfect systems would not be able to cope, and defeat follows. Therefore I do not think it possible to have an army that is undefeatable (rather than simply saying that it is undefeatable)

Instead, perhaps a redefinition of what an 'army' is is called for. For instance, in Napoleonic times, the concept of 'total war' was used, ie. All citizens become soldiers, regardless of role, gender, status or ability. All industries are war industries.

To defeat this 'army' you need to defeat the whole nation. This is substantially harder and thus the 'army' is undefeatable for as long as the nation lasts.

However, eventually even a nation will fall through other means (internal corruption, or economic decline), so perhaps you need to look at what makes a nation last the longest. This would be an intriguing question.

You will never be defeated if you never fight. 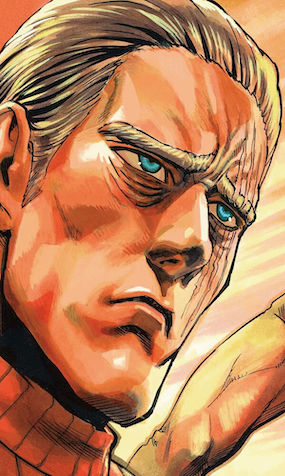 In the One Punch Man manga, King is revered as the world's strongest man, a formidable monster fighter and hero. In actuality he is just an ordinary guy. He bluffs and lucks his way through situations.

Since gaining the title as the world's strongest man, King has become very good at bluffing and tricking his opponents, both intentionally and unintentionally, causing them to hesitate or even downright surrender. When assassins attempted to take his life, King was able to use clever intimidation and wise explanations to make the assassins back down and leave him in peace - even though he had no idea they were assassins.

Your army is undefeatable because no-one will fight them. There is never an opportunity for them to be defeated. Their reputation is such that opponents yield or retreat rather than face them in battle.

Seriously, I am not kidding. You just never fight a fight you do not win. Before you commit to a fight you evaluate the odds and if they do not look very good, you do something else. Do this and you will never lose.

Doing this has some requirements.

In both meanings of the word. You must avoid being taken by surprise or estimating the odds wrong. Cavalry is good at scouting and your people have training and education to understand what they see so this should be possible.

The issue is that the cavalry that is good at scouting is light not heavy but it would make sense to have permanently attached light cavalry scouts and screen. They could be trainees or junior knights.

The enemy must not be able to force a bad fight on you. This is generally not an issue with cavalry operating independently but there are some points you need to remember.

You must be free to move. You need to operate independently from rest of the army. You must not have defensive responsibilities that pin you down defending a position. And the enemy should not have cavalry fast and strong enough to force you to a losing fight. So you'll want some reason why the enemy cannot field strong cavalry or why it is not able to force an engagement on its terms.

Remember that your logistics need to be able to keep up! So you either have a very fast pack train or only operate in areas where you do not need to carry much supply.

You must not be engaged in combat long enough for enemy to pile in more forces. This is actually good for shock cavalry. You see a vulnerable point, you smash it with a charge and disengage to a safe distance and start looking for another opportunity.

If a battle starts going badly you must be able to leave. Preferably with a valid and honorable reason that does not hurt the reputation. So do not participate in battles without secure retreat. And always have valid reason why somebody else should delay the enemy.

Being the fastest part of the army with best ability to get away is a start but unfortunately it also makes you good unit to buy time for slower units so more is needed.

I am thinking some sort of holy relic that the force is sworn to protect. They carry it with them everywhere because they are sworn to always protect it personally, this includes to battle. And if battle turns out badly, they just have to keep it safe from the enemy by carrying it away as fast as possible. And of course they all need to go as well since they are sworn to protect it. They just cannot stay behind. Too bad, so sad.

Additionally a sacred relic would be very good for building up reputation. You cannot really send bards around to advertise how awesome your unit is but spreading stories of your sacred relic and its awesome God given power to guarantee victory in combat... That is just normal right? More like, it is your duty to spread word of the glory and power of God as seen as miracles of relics of his servants.

13
How can infantry and light cavalry defeat heavy cavalry in a valley?

10
How does a mundane army defeat an immortal army?
5
How could a medieval army defeat Sauron's army?
15
How to mobilize army in country with no standing army?
14
How to fight an army of skeletons?