Could Vocal Mimicry be a Viable Tactic for a Predator?

Vocal mimicry for this question refers to the ability to imitate the sounds of other animals, exemplified in this video of a lyrebird mimicking several species of birds, a chainsaw and even a camera shutter.

The idea of a predator imitating the sound of a human voice is by no means my creation, Pliny the Elder claimed over 2000 years ago that hyenas could imitate human voices with the intent to deceive and kill.

So with the fact that there is an animal in nature with incredible vocal mimicry and that legends of monsters with vocal mimicry I am therefore quite curious on how feasible of a tactic this would be for a large predator.

My logic is that a predator could mimic the calls of various prey items than it would be able to lure prey close enough for it to pounce on them.

Bonus: Would it be feasible for this predator to be a mammal, or is a large bird more feasible?

Mimicry in itself is one of the key strategies for prey and predator animals, and while audial mimicry is rare, it also happens. Mostly certain insects like cicadas hunt in this manner, but a feline species called the margay hunts with this tactic - pretending to make the distress call of a baby a certain monkey species, luring its prey towards it. Other than that, there's the obvious example of us humans using various hunting lures to hunt.

I take it that by large predator you mean something like an apex predator of not just a part of a jungle but the entire jungle, something like a tiger or a bear? Scents are a huge defensive tactic by many animals, so you could take that into account when designing your creature. How smart is the predator, how smart is the prey? Does the predator have a certain odour, does its prey have the sensory organs to sense it other than through hearing? What about eyesight, reaction speed, etc. You could also take into account how it'll move and hunt. Does it keep its distance and then swoop in to catch its prey, like a hawk, or does it lay still and camouflaged until its prey is close enough for it to strike, like a snake? Is it a pack hunter, constantly following and guiding the prey to its pack by making "safety" calls, or maybe it stalks after until its prey tires out, all the time making "safety" calls?

To surmise, when it comes to audial mimicry itself, it's mostly used as a defensive tactic by prey to avoid/fool predators, but yes, aggressive audial mimicry makes sense and could absolutely be a tactic.

As it happens, I know of a predator combining vocal mimicry with other forms of mimicry. This is so horrendously effective that it can infiltrate the colonies of its victims and remain undetected while killing and eating their children for nearly a year! During its lifecycle, it will consume on average 1,200 prey from the colony it targets.

What kind of horrific predator could succeed in doing this? 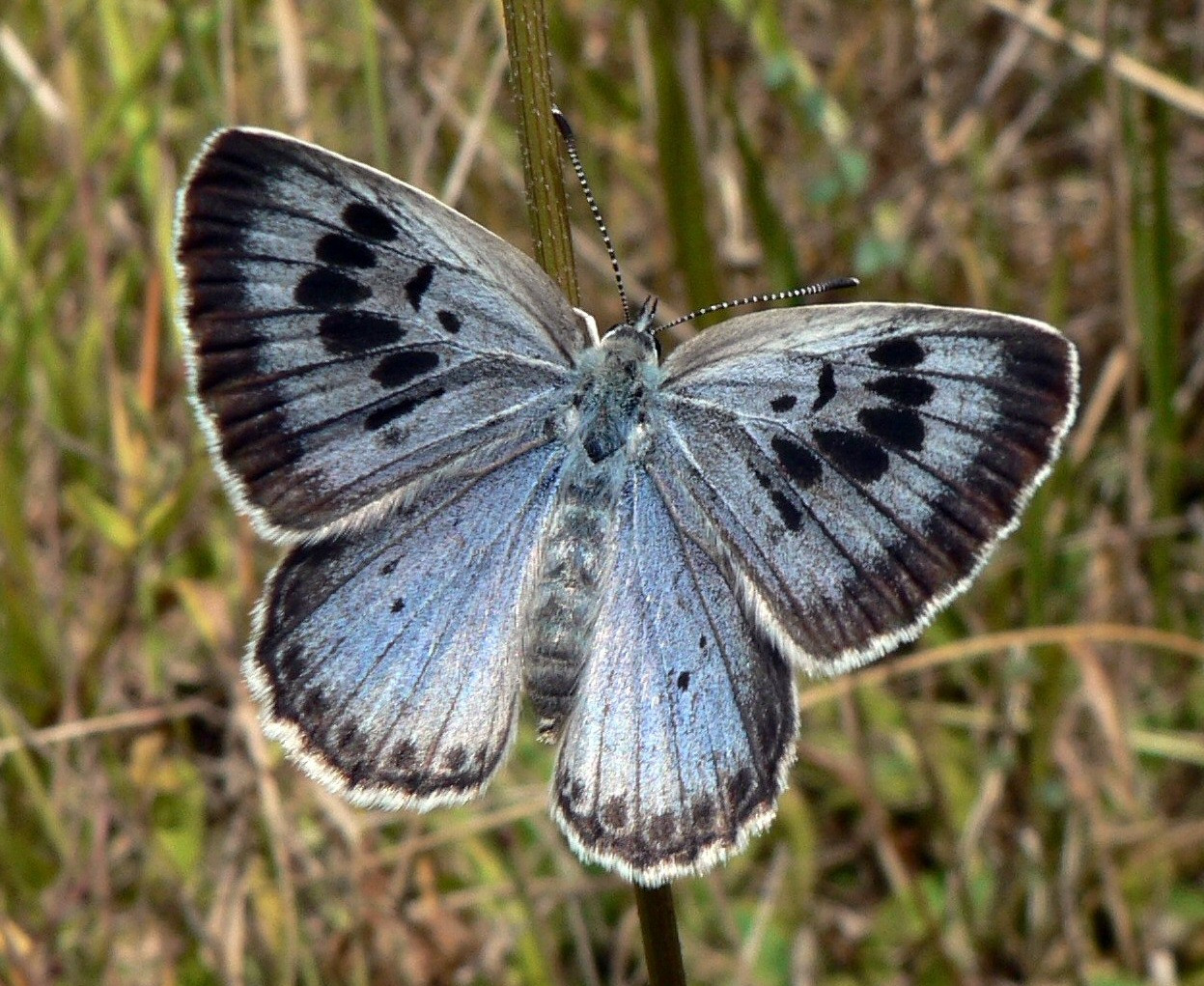 (This image was posted to Wikimedia under a Creative Commons 3.0 license - https://creativecommons.org/licenses/by-sa/3.0/deed.en. As per the terms of that license, credit is due to Wikimedia user PJC&Co)

During it's early life, the caterpillar is merely a herbivore, living on plants. However, after it has moulted three times, it falls to the ground and begins to secrete chemicals which mimic the pheromones of Myrmica sabuleti ants. At this stage, it has some physical resemblance to an ant larva, and foraging ants are fooled into thinking it's one of theirs that's escaped from the nest. They will carry it back to their colony, and put it in with the real ant larvae.

The P. arion caterpillar, once it's safely ensconced in the ant nest, will go looking for relatively isolated chambers in which it can hide. After finding one, it spins a layer of silk which will allow it to hide at ceiling level. Every so often, it will emerge from this hideaway and venture into the "nursery", where it will eat several of the ant larvae. It chooses the largest larvae it can find to feed on, before returning to its hiding place. It may be as much as ten days before it ventures out again.

Meanwhile, it's making sounds that mimic those of an adult queen ant. Combined with the pheromones it's secreting, this allows it to go undetected, and in fact to be accorded the highest possible status in the colony! That said, parasitic butterflies from the same family, such as Phengaris rebeli, are the ones which really exploit the difference in sounds between queens and workers. I think this one just needs to impersonate the ants in general.

Essentially, what it's doing is

Over time, the caterpillar may well end up eating all of the larvae in the nest. This causes the surviving adults to abandon the nest. After this has happened, the caterpillar waits for another, nearby ant colony to take over the abandoned nest. It can go without food for several days while waiting for this.

On average, a caterpillar that survives until adulthood will destroy two host colonies by consuming all of their larvae, and will have a third colony of victims present in the nest when it finally pupates. During this time, it will have killed and eaten over a thousand ant larvae. That said, new colonies don't always expand into the nest, and the caterpillars sometimes starve to death as a result.

During its lifecycle, the caterpillar will grow much, much larger than an ant larva. So visual mimicry is absolutely out of the question. It's got to rely on a combination of acoustic and chemical mimicry, as well as staying hidden.

But eventually, it pupates. At this point, it can no longer secrete any chemicals, and bears no visual resemblance to an ant larva/pupa/adult. All that it has is a "stridulation organ" on the pupal shell, and this organ continues to imitate the sounds made by the queen. That is now the only from of mimicry it's doing - it relies entirely on vocal mimicry to survive this stage and reach adulthood.

A beautiful butterfly - or a horrifying monster? From the viewpoint of the ants, it's the same thing!

one unifying bird-speak ism is a sharp short uptick in pitch as almost a single note slide "up"... just about all birds use this to warn -cross species- that there is something to be alerted about.

HOWEVER, taking that logic a bit further, if "WARNING" was used by a sympathetic species that is social enough to Usually save a fellow of __ then a distress call would be Quite selected for in a predator... but then quickly selected out by the prey...

I think the answer mentioning "Predator" with a prey species that's curious enough to investigate some weird vocal call (like snipers wounding a person in a field to then have others try and save the injured) might be viable, but dependant on a more Studied relation between predator and prey, irrespective of species type for either (bird like / mammal like / or even under water)

Blue jays use that tactic. They mimic red-tailed hawks to scare other birds to steal food, such as birdseed and eggs.

You should carefully consider this creatures environment if its surviving off a mix bag of moderate sized animals and humans or the bulk of its diet just favors the human and large animals since you seem to want it to have the taste for human one then needs either a large roaming area to hunt in maybe crossing state lines (giving respite to highly rural locations lowers their suspicions) but the pit fall in doing this is that once the boondocks is taken out no one is eager to move there no roads, no power, ect tend to not attract many folks to difficult areas so now your looking for areas that get sporadic traffic like trails, hunting seasons, and gold/resource mining areas to feed this thing year round.

The size should also be considered and its digestion how long can it last without humans or other feed? Can it go a month or more between feedings or not? Craft this thing with the environment, it's physiology don't try to squeeze it into just one known mythical or real creature figure out what it needs before aesthetics then graph its habits to help make the right monster for your novel.

It could learn words yes have you seen the video of the cat asking, "Are you coming down?" scared the owner. Foxes can sound like screaming women or the peacock screams, "HELP!" if you don't know these things can do any of these sounds then yes you might run into that peacock or fox but your predictor is banking on an altruistic person when the society it hunts in becomes cold hearted cries for help are no longer investigated it will need to adapt.

I'd day the thing in question might be a pair one calls the other traps and kills they both share it. Because once the human figures out where the sound is coming from and sees the creature its attached to their tendency to flee or fight is going to occur a group or paired assault would be the best attempt no matter the size or shape of the creature to kill the human.

If your predictor is a stalker type it could observe a group of prey learning their voices, relations, and habits and pick them off sometimes at range other times at the home.

When the family members/group/pair are desperately missing their missing member they might be tricked for a brief duration outside if the person calls them and knocks on their door or shouts at the edge of the woods but if the family inside is paired up there is a small risk one may stop the other. If the area is rural there maybe little to no witnesses to spread the word of the human mimicking creature to others but in small towns or cities there will be.

16
Tactical Cooling of a Predator
22
Could an Apex Predator grow into an intelligent society?
7
Vocal hardware required for a single creature to communicate with any land animal?
2
Could a land predator naturally evolve active night-vision?
2
A Tiktaalik for Placoderms
3
Could this organism be viable?
4
Would a large and venomous mammalian predator be viable?
3
Would a large gliding predator be viable?
3
Are flexible digits viable for both running and climbing?