An effective way for interstellar communication?

Radio waves travel at the speed of light. Communication across vast interstellar distances is difficult due to weak signals and slow multi-year duration. I honestly imagine it to be like old times with message couriers travelling the empty void.

Any ideas for a somewhat realistic concept for quick communication between stellar bodies?

If anyone has a cool theory/idea in the realm of loose science fiction I'd love to start a discussion.

Yeah, no, radio is the fastest means of long-distance communication, and interstellar radio transmissions would require massive antennae and dishes or other types of transmitters and receivers. Look at the planetwide arrays of radio telescopes used to scan for extraterrestrial signals and you’ll get a sense of the scale.

Most sci-fi authors, as far as I know, avoid that tricky detail entirely. I suppose the presumption is that if humans have colonized distant planets, then communication should be no problem. But you’re right that it is. Humans could eventually colonize the galaxy, even with current propulsion technology (given a few million years). But communications won’t move any faster than the speed of light...unless you wave your hands.

Ursula LeGuin famously invented a fictional device called an “ansible” which allowed interplanetary ambassadors to communicate with the governments on their home worlds in real time, instantaneously, with no delay in communication, despite the staggering distances between planets.

In his incredible Remembrance of Earth’s Past trilogy, Chinese sci-fi author Liu Cixin describes alien technologies that use either neutrinos or gravitational waves for rapid long distance communication. These also involved massive arrays for detecting these nearly undetectable forces. I can’t remember his explanation for why they’re superior to radio, though. Maybe longer range? Radio waves rapidly fall off with distance. Speed is always limited by the speed of light, and I remember there still being some sort of delay involved. More importantly, it sounded cool, and it was an inventive idea. Liu also describes using the sun as a sort of radio transmitter—because in his story, ground-based arrays were not sufficiently powerful to broadcast an interstellar message, even to the nearest stars.

Such a plot device can be used in many unexpected ways, given the huge time gaps between communications. Perhaps you’ll come up with your own. It all depends on how much you want to bend the laws of physics, and how much you care to either explain or omit details. There is an art to not spelling things out. Sometimes it’s best to let readers wonder.

As we understand physics, the speed of light is a hard limit on how fast information can travel (aka the speed of causality). This makes light waves (including radio) the fastest method of communication we know of.

A lot of sci-fi uses quantum entanglement to transmit information faster than light due to popular misunderstandings about how quantum entangled particles act, but in reality two entangled particles can't transmit any information between them. Another option is to make up another field/dimension/particle that doesn't exist in reality and use that (e.g. subspace in Star Trek).

With a little handwavium, telepathy in real time across stellar distances can seem plausible. (A fair number of people believe in telepathy without any handwavium at all.)

See Robert A Heinlein's novel Time for the Stars. Back cover of the 1978 Ballentine Books edition reproduced here: 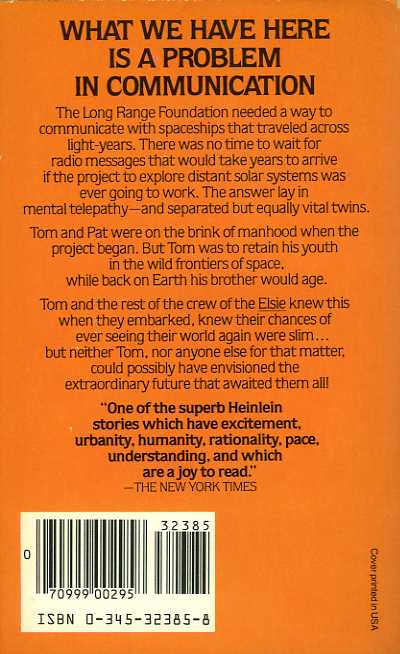 You need some Powder of Sympathy (Maybe)

From the Wikipedia article:

The powder was also applied to solve the longitude problem in the suggestion of an anonymous pamphlet of 1687 entitled "Curious Enquiries." The pamphlet theorised that a wounded dog could be put aboard a ship, with the animal's discarded bandage left in the trust of a timekeeper on shore, who would then dip the bandage into the powder at a predetermined time and cause the creature to yelp, thus giving the captain of the ship an accurate knowledge of the time.2

Admittedly, this is a speculative application since I am not certain that the Powder of Sympathy is actually FTL. Certainly more extensive testing will be necessary to resolve this question and possibly apply this historical medicine to the problem of interstellar communication. It is indeed fortunate that that's what government grants are for apparently.

The dog barking could be coded in Morse or similar encoding the provide general purpose communication. The bit rate would be very slow, but much better than waiting 5 years for light-speed.

It is possible that I have overstepped the bounds of "somewhat realistic" in this answer.

Perhaps the FTL Communication article would be more in line with the original question. If so, consider this second possibility. The warp drive in the form of a Alcubierre Drive has been considered at least remotely plausible (in the sense that it is not mathematically eliminated), has been conjectured to be a pre-built structure (a transport tube) that would span the long distance, supporting the warp-field.

If such a structure is remotely plausible, certainly a similar of structure could be built with the purpose of communication instead of materials/passenger shipping. At worse case, tiny pellets could be sent through the Alcubierre Tube that contain the desired message.

A message tube is almost certain to be simpler than one built for bulk materials.

The main problem with sending interstellar messages is that with the distance traveled, their power gradually decreases due to gradual scattering ( diffraction). Imagine that you threw a stone into the quiet surface of a lake: from the source stone, circles started to go in all directions, but the further they diverge, the less noticeable they become. The same thing happens with radio waves: if you calculate approximately, then twice the distance from the communication source will reduce the power of radio waves by four times. As you can see, detecting such radio waves at a distance of several hundred light-years from Earth will be a difficult task for space civilizations.

They are disappointing: when transmitting a 40-watt signal from Earth using a giant 70-meter antenna of the NASA DSN (Deep Space Network) system, which has a gain of 84 dB (that is, amplifying the signal power in the main direction by more than 100 million times), at a frequency of 32 GHz (Ka-band, this is what the Cassini probe uses) and a transmission speed of 32 kbit/s (such as the European Rosetta space probe has) and receiving using a 12-meter antenna (with a gain of 69 dB, that is, a little less than 10 million times) of the space probe in the alpha Centauri system And the frequency of occurrence of erroneous bits (bit error rate) is 0.49. This means that almost 50% of the transmitted information is lost, which makes the specified communication channel almost useless.

To solve this problem, according to Maccone, the mission's FOCAL (Fast Outgoing Cyclopean Astronomical Lens) probe, equipped with a radio transmitter and a 12-meter antenna, should be positioned on the "optical axis" of the lens (a straight line connecting the receiver and transmitter) in any place further than the nearest focus — 550 AU from the Sun. It is better to go further, because in this case the radio signal around the Sun will be less affected by interference from the solar corona.

In a transmission channel that uses a transmitting antenna located at the point of focus, another component is added — the Sun as a gravitational lens. The gain of this lens for the same Ka range is 70 dB (10 million times). This can dramatically change the situation, especially if you consider that the gravitational lens is not only the Sun, but also any other star, in particular alpha Centauri A. However, since its mass and diameter differ from the sun, its closest focus is located 750 AU from the star.

According to Maccone's calculations, using two FOCAL spacecraft with 12-meter antennas in the corresponding foci of the Sun and alpha Centauri A, you can achieve perfect success: by amplifying the two stars, you can reduce the frequency of erroneous bits to almost zero at a power of 0.1 mW (Yes, 0.1 milliwatts!).

The results are impressive: for example, with an unlimited frequency band (and a power of less than 1 mW), the speed of information transmission over the radio bridge between the Sun and alpha Centauri A ( 4,.367 light — years ) is 210 Gbit/s, and between the Sun and Sirius A ( 8.,611 light-years) is 100 Gbit/s. Communication is also possible over longer distances: for example, between the Sun and a sun-like star in the center of our Galaxy ( located at a distance of 30 thousand light years), the data transfer rate will be, although small, but acceptable 5.4 kbit/s (although at a power of 1 kW). This is, of course, theoretical data, in practice it will not be so rosy, but it is still practically possible.

Lasers are way better in long range communication thanks to inverse square law. Where your normal radio transmission will loose it's strength further the signals goes, laser is much better in that regard.

Laser can has another advantage. Due its higher frequency then radio waves, it can carry much more energy, therefore can be used as power source or as an substitute for solar winds for solar sails.

Not the answer you're looking for? Browse other questions tagged reality-check science-fiction communication interstellar .