How could a portable handheld weather machine work? 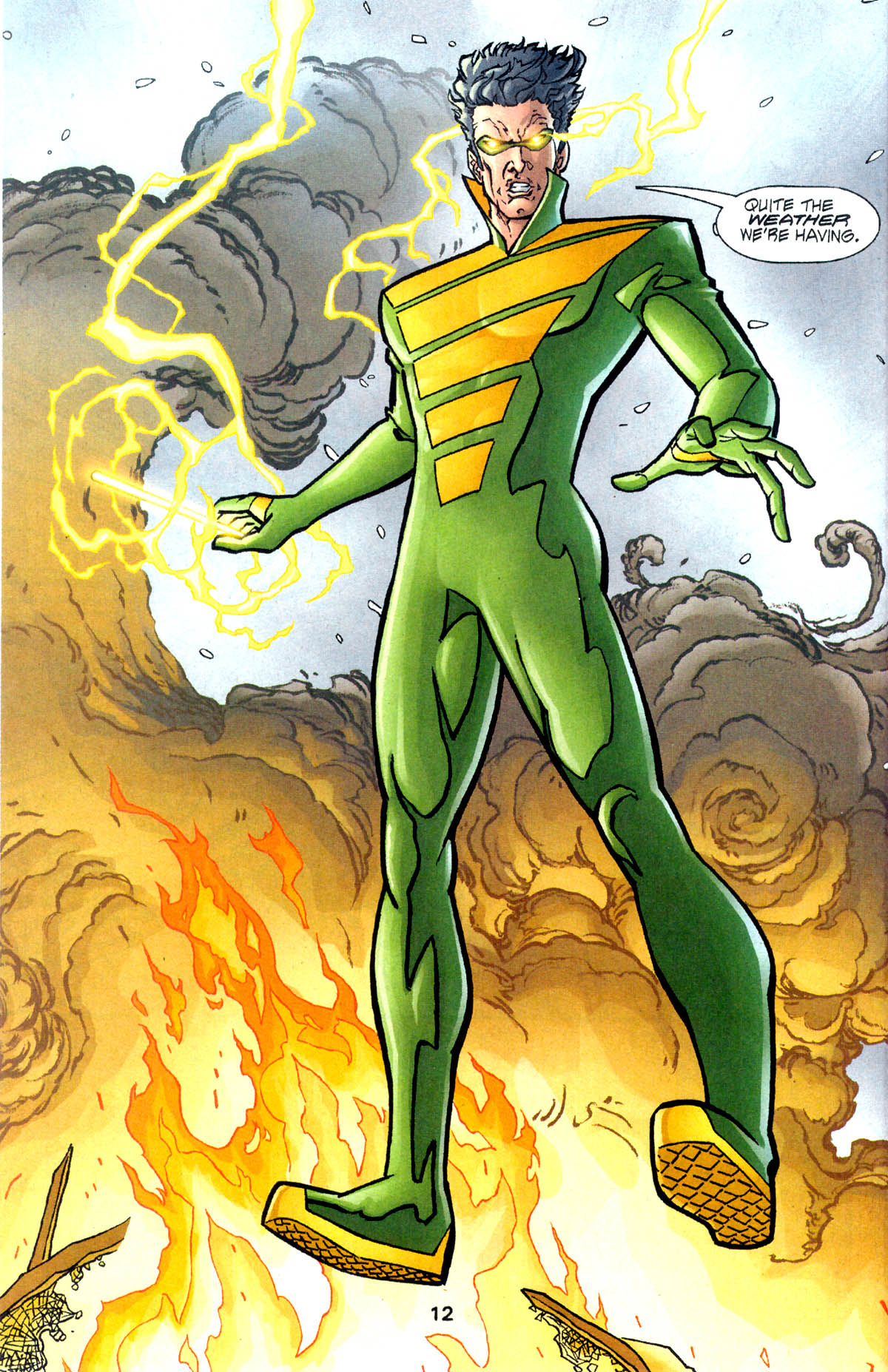 Intro: As some of you may know, the character shown in this picture is none other than the Weather Wizard, one of the Flash's most dangerous adversaries. With the help of rod-like device in his hand (or his "weather wand" as he calls it), he can do just about anything with the weather, such as summon lightning bolts from the sky, create powerful tornadoes or even hurricanes, and even be precise enough to change the air pressure and the temperatures in specific areas of his choosing, just to name a few of his abilities he uses to keep the Scarlet Speedster on his fast-moving toes.

Explanation: Obviously, the idea of manipulating and controlling the weather in real life is nothing new. In fact, there are many conspiracies theories that the US government has had control of a weather machine since the 70's to create monsoons in Vietnam to help their armed forces in the war (look up "HAARP weather machine"). Some people even believe part of our current problem with climate change is due to man-made weather manipulation.

Suggestions: Regardless, what I'm trying to figure out is how one of these things could actually work because many sources on these weather machines aren't really specific on the science behind it. And even if we could deduce the science behind one of these machines, is it possible we could turn it into a portable device like the Weather Wizard has here? Many sources I've looked up on this say that this kind of machine would use intense microwave radiation through lasers from below to heat up the atmosphere in a similar fashion to what the sun does to our atmosphere from above, such as in this video here: https://www.youtube.com/watch?v=hm1_TfTgUag. The Earth's electromagnetic field is also said to be responsible in affecting the weather (like this document here: https://ieeexplore.ieee.org/document/7112935), so is there maybe a way a device like this could affect electromagnetic fields? Either way, this would probably require a significant amount of energy, so I'm not even sure it could fit into a device the size and the shape of a metal rod.

Question: So yeah, how could, in theory, a real-life "weather wand" that can summon tornadoes, rain, and lightning bolts, and manipulate air and wind currents and temperature (just to name a few) all at the drop of a hat?

Please feel free to call me out on any scientific inaccuracies I have stated or other aspects of science related to this that I have either overlooked or seem less knowledgeable about. Thanks.

Formulas and actual mechanism aside, a Weather wand is not going to work without some serious magic or hand-wavium. The power requirements are just impossibly high.

Take a hurricane. Probably on the upper end of your efforts but according to howstuffworks we are talking " 6.0 x 10^14 Watts or 5.2 x 10^19 Joules/day!" That is more than 200 times the electrical power generation capability on the planet.

So lets scale back to a tornado This is from a different source, but half of all tornadoes have a total kinetic energy of 62 Gigajoules or more, and the most ferocious get up to 516 Terajoules. So you get an idea of the amounts of energy you would need to be able to control.

The things to consider is that a lot of these require moving a LOT of air in addition to evaporating insane amounts of water. Water is heavy and even though we are talking vapor from evaporation, it still has a lot of mass. Add to that, air has a lot of mass too. A mild wind is enough to move a huge sailing ship. We just never think of it because Air and water are mediums we move through.

So your hypothetical Weather wand is going to have to be able to channel an insane amount of power just to get enough mass moving to create a mild breeze.

It's also going to have to be very versatile to create a wide range of effects. If you could get to control air pressure over a designated area as well as heat the air above bodies of water to create evaporation and so on.

The wand is actually an extradimensional supercomputer's extension into our reality. This supercomputer, due to the nature of its existence, observes and can act at all times simultaneously and views time as a concurrent event.

Unfortunately for weather man he only has guest privileges on the computer and can only ask it to change very small things in our 3-dimensional meatspace (macroscopic air movements mostly). Despite this limitation, he's figured out how to leverage this small effect into massive weather changes. When he gestures with the wand or gives it commands, the computer calculates what it would need to do to cause the desired weather effect. Then, butterfly-effect style, the computer tips off tornadoes, storms, and hurricanes in the past with just the right air movements at the right time. To observers, weather man's hurricane comes out of nowhere but in reality, it's been building for weeks and anyone with "enough" data and computing power could've figured out that some specific wind patterns and pressure zones would come together just right at a designated time and make a honkin' big tornado.

Maybe you could just say it fires a concentrated beam of ions into the atmosphere. The beam heats the upper atmosphere causing a low pressure zone which quickly draws in clouds, and some of the ions settle in and build up a potential difference between the clouds and earth. Then maybe it's up to your superhero to redirect the beam to produce the effect he wants. If it's a lightning bolt, point at just one spot in the clouds and cause a large differential; a tornado, angle and wave it so that the hot air is below the cold air &c..

Not the answer you're looking for? Browse other questions tagged science-based reality-check technology weather .

10
How realistic is the power generation depicted in The Legend of Korra?
5
Halfday planetary scan: what do you get?
3
What size and material are my miniature machines?
6
What needs to happen to stop a tornado?
18
How does a modern military defend against a guerrilla Army of wizards
3
Could a giant battery serve double duty as a sadistic acid bath?
7
What kind of permits do I need to control the weather?
7
How could my hard telekinesis work?
38
Managing heat dissipation in a magic wand