My friend and I are working on this world called Roia. It shares many terrestrial properties with the real life earth: composition, axial tilt, distance from the star, presence of water, etc. You can consider it an Earth AU. Probably the biggest difference is that Roia has two small moons rather than one large one.

Right now we're working on the climate. I tried to do it by eye, using the Koppen climate classification system. (I've exchanged the labels so that it's easier to understand. 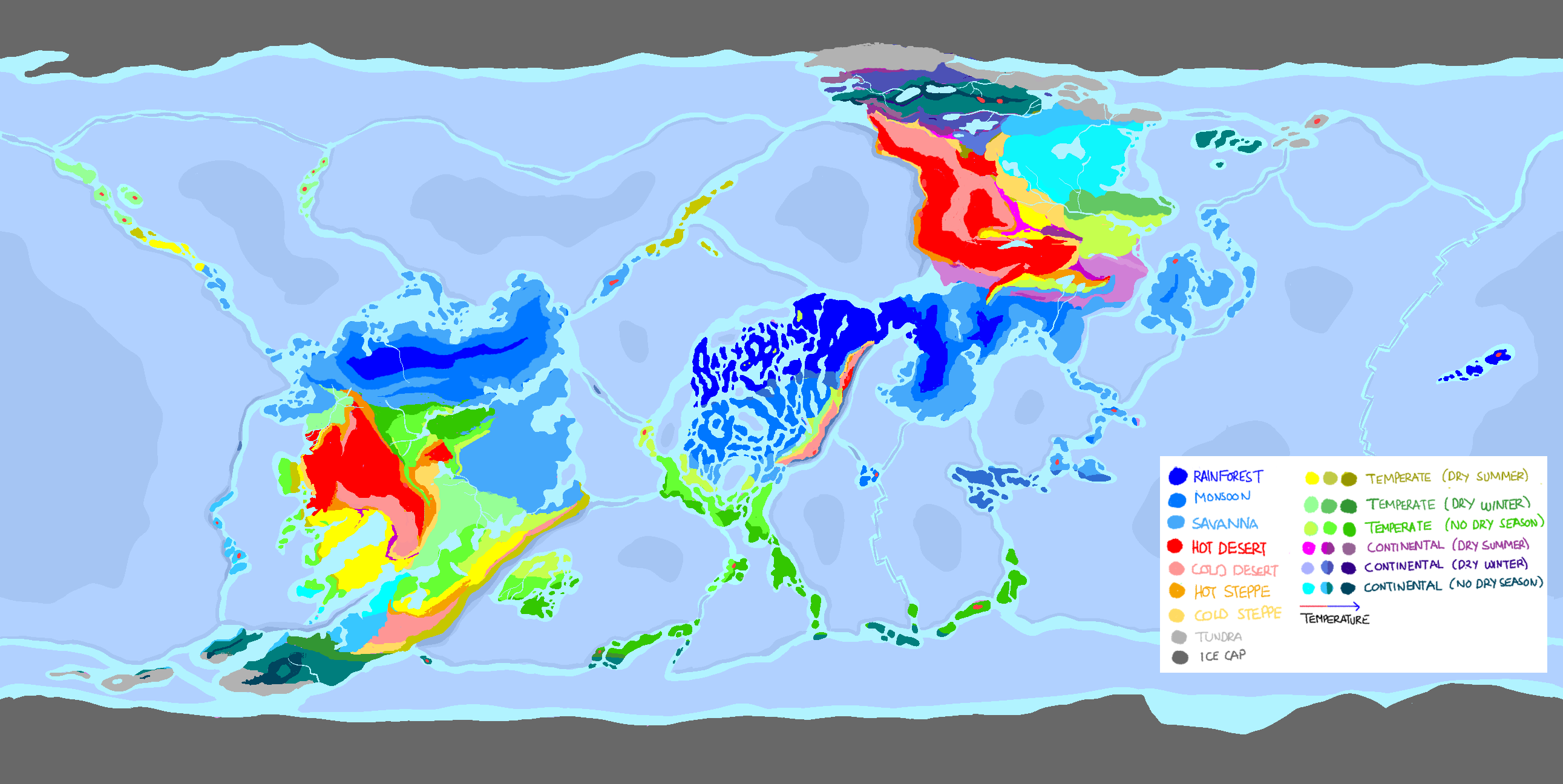 Any advice on the accuracy of it? I found it difficult to compare to earth since Roia has so many archipelagos.

These are the ocean and air current respectively as well as the topological map. I hope these will help with determining the the climate of regions. 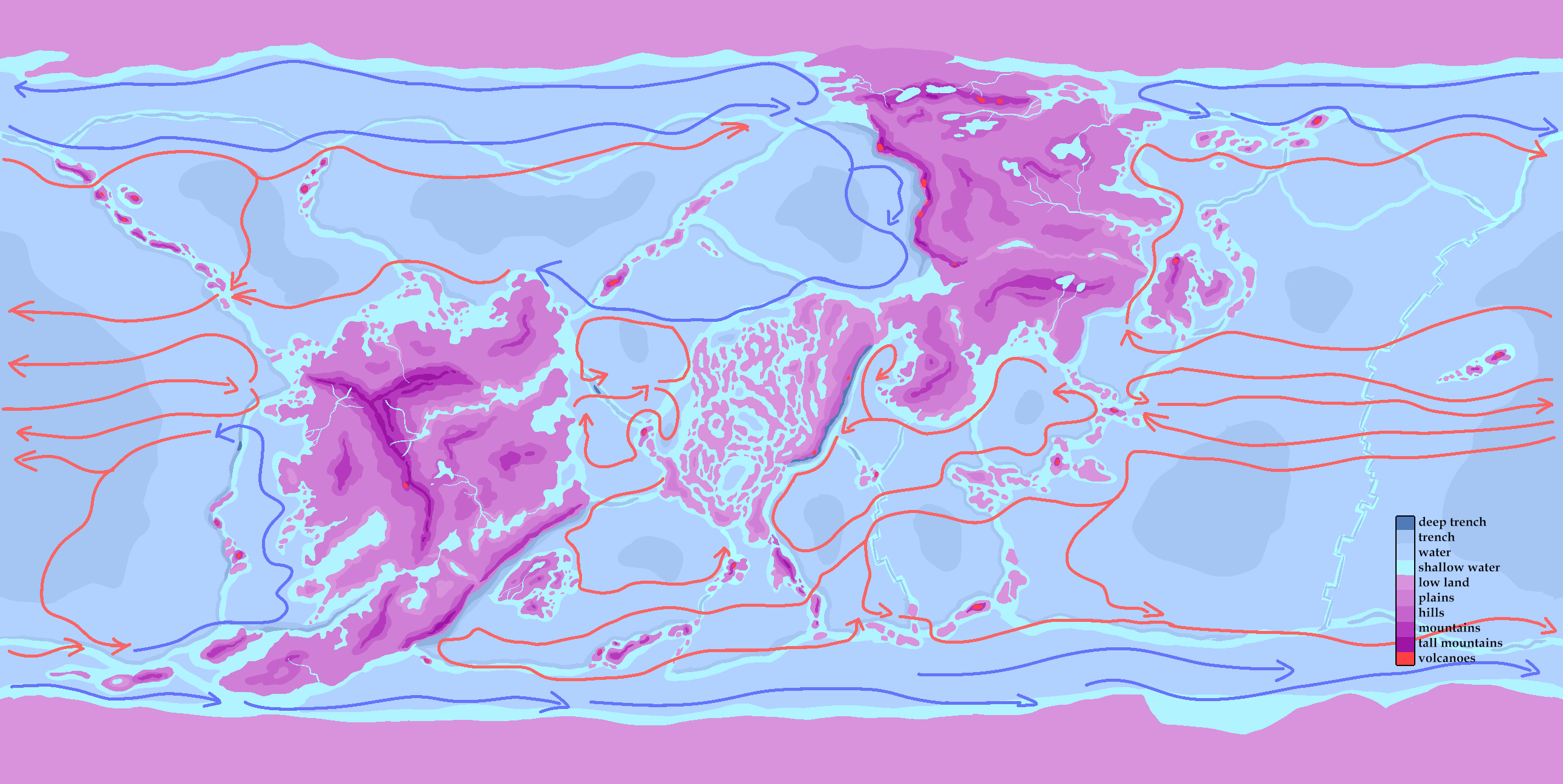 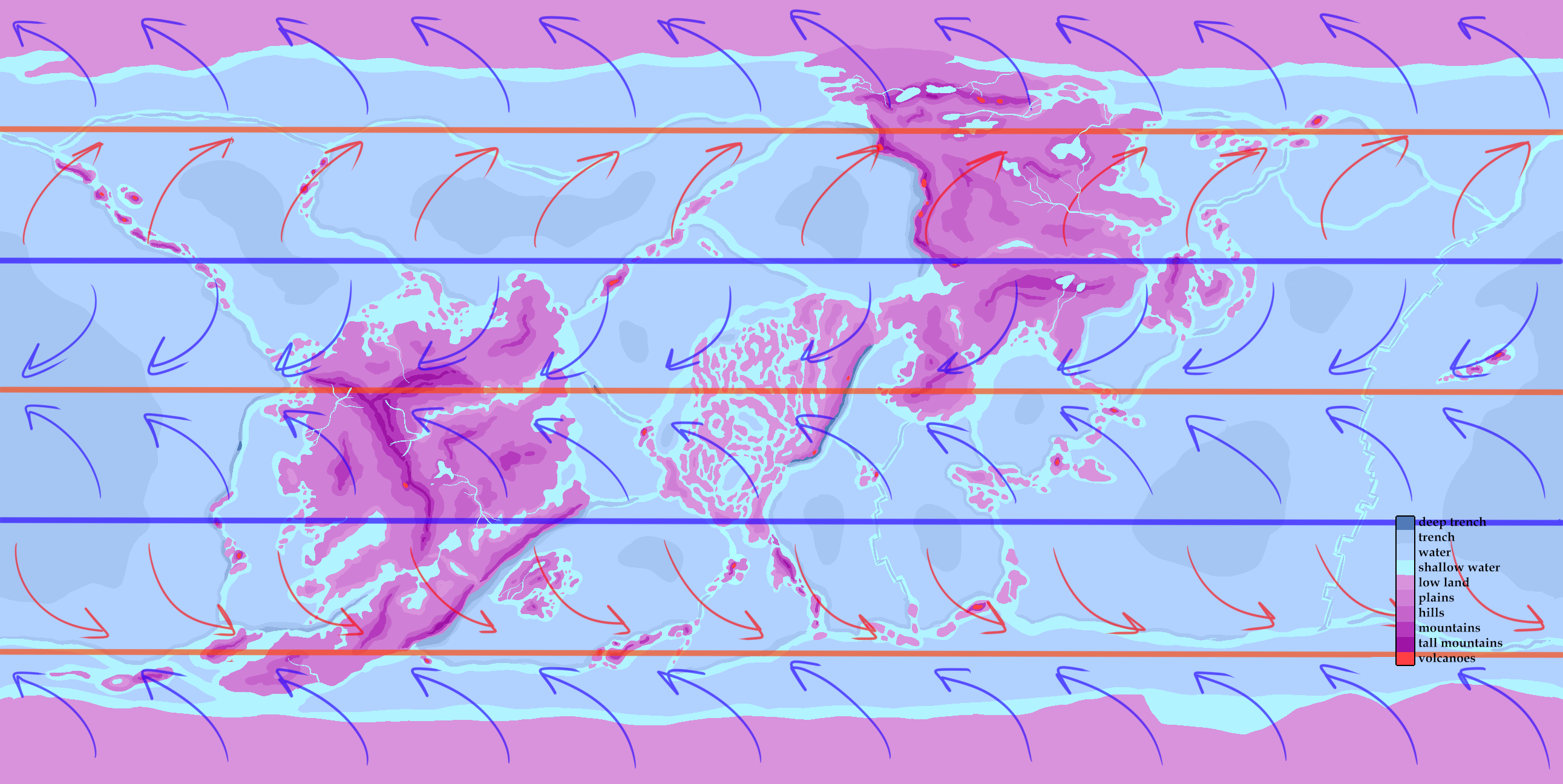 Tip 1: If the current flows towards the equator, it is inherently cold. Even if the water is still tropical, it is cooler than the air it is approaching.

-many of your archipelagos should have dryer regions on one side

Tip 2: Hot deserts are hot because they are in the tropics. They shouldn't be in the same zones as Temperate climates (except in small slivers in lowlands and cold-current coasts.

-Tropical Zones=Hot Deserts (unless at a high elevation)

I just had a look at your oceans, as I have some knowledge with them....

It was pretty good. You had most of the correct features.

Just a heads up. Currents don't generally just separate at 90 degrees for no reason. It has to have some sort of hydrodynamic flow or bathymetry feature driving the splitting and merging of currents.

I noticed a couple of your currents where going through the archipelagos instead of along the side of them. While currents can traverse across them, the shallower bathymetry acts as more of a barrier to faster established currents.

I didn't think your long east to southwest warm current in the southern hemisphere were so connected. That's a long way for a warm current to travel through many interfering islands. Warm currents are normally slower and more likely to spread out when it hits a barrier.

Just a note. I recall that circumpolar currents (polar currents that flow 360 degrees without land interference like you have in the south), allow for the currents to be colder and more established (with less mixing). Your northern "arctic" current is going to be warmer than your southern current as it will have more chance of mixing with the warmer currents around it. The land on either side sort of acts like a giant mixing bowl. This will impact on your climate zones along the coastal regions in the north (it also impacts on the development of the hadley/ferrel/polar cell atmospheric circulation system, if you want to go really in depth). Something to take into consideration.

Not the answer you're looking for? Browse other questions tagged geography map-making .

4
World with only one habitable, off-center quadrasphere/quadrant
4
What vegetation/biome could I expect in a tropical region at an average temperature of 8-9 degrees Celsius?
3
How can I explain the geography and climate of my planet?
2
Does my climate map work?
4
distance between climate/geographical changes
6
Is my biome/climate map realistic?
6
Advice on accuracy of world map
6
What Will My Alternate Earth's Climate Be Like? (Basically Speaking, Not Asking Much)
14
Is My Map Realistic?