What is the maximum population density in a settled land where farming and homesteading is impossible?

Let’s say that early middle ages humans discovered and expanded into a newly discovered land. Those humans made a concentrated effort to populate this new territory; they shipped several ships of settlers and refugees, along with armies of soldiers intended to forge a foothold. Then flashforward a hundred years.

Despite the human’s best efforts, they proved incapable of fully conquering this new world. Many of the native creatures – mostly roving monsters or scattered primitive warbands – simply proved too formidable to be hunted, repelled or defeated.

The humans did manage to establish several coastal colonies in the new world – yet their cities rely entirely on strong walls to keep the natives out and protect the citizens. Outside of these scattered few fortified human cities, the land is still wilderness ruled by monsters. Even travelling alone is a coin-flip. Unlike in the real-world, humans here are not the top of the food chain.

As a result, for settlers farming or homesteading is very difficult: if a family of farmers ever tries to set up a farm outside of the walls, they get eaten by the natives very quickly. Claiming new territory not impossible, but it requires a dedicated force of soldiers to hold the perimeter. The humans could fortify a farm, but there’s a limit on how many walls they can build or how many soldiers they can spare to hold them.

As such, growing crops is treacherous work; supplies are limited, people are hunted, and establishing secure farmland usually requires more manpower than it can feed. Assume that the humans are stretched to their limit.

Humans can still leave their walls to hunt or fish the smaller native animals – yet hunting is perilous due to the big creatures around. The ecosystem is mostly comparable to the real world examples, but with the addition of predatory megafauna. Some of these large predators can fly, others hunt by sea, and many are just hordes of monsters.

The question is; is this situation actually sustainable?

Generally, cities consume far more than they produce. In early civilizations, most of the populace rely on single-family farms or homesteading. Hunting and foraging is less reliable, and generally farming crops is the only real solution to feed a lot of people. But in a land where the farmland was simply too dangerous, would an expansion effort even be able to succeed?

So what is the largest population that a city could actually sustain, in theory, if all of its inhabitants are forced to take shelter behind fortified walls?

Edit: There can still be farmland within the walls, but only within the walls. I can't say what area those walls cover, simply because I'm not sure how much is reasonable. This isn't an Attack on Titan setting where the walls are miles long - the walls are what can reasonably built by settlers within a hundred years, but I doubt if that area is large enough to maintain a sizeable population.

Consider a circle. It’s boundary grows linearly with its diameter, but the area within grows as the square of it.

Why is this important?

Because you’re thinking the wrong way round. You’re thinking of putting your city inside a ring of undefended farmland. What you should do instead is put your farmland inside the city. Give your houses big gardens. Establish large commons and allotments for keeping animals and crops. Make sure your walls enclose all your farms. Paradoxically you’ll find you end up with more food and more soldiers.

The circle. The number of people you need to man the walls grows linearly. The amount of farmable/livable space grows faster than that.

Using such a method your city can grow to be (but not necessarily start off) arbitrarily sized. Big enough even that after a while you can separate out again into dedicated (still behind the walls) farmland and city.

If you can’t support farming and living in the space you enclose then no size of colony is viable without additional colonists or resupply. Hunting and gathering is going to be more dangerous than defending farmland and will return lower yield. Your people will either die trying to get food or die because they couldn’t get food.

This leads your ‘once established, now abandoned’ cities in a quandary. They had more food than they could locally produce once, and the walls will be sized for that population. Work out what size you want that city to be, then assume lots of people starved to death and left behind plots of land that the survivors repurposed to growing potatoes. It takes somewhere between half a hectare and a quarter of a hectare to keep a fully functioning human going, so expect to tear up a lot of your inner city to feed the troops garrisoned on the walls.

Exactly how big you need to be to keep going very much depends on a lot of stats we don’t have. How many people do you need to man a hundred meters of wall to mount a credible defence is vital, but the core point remains the same:

Either your fortified city can support itself from within the walls or its already dead and doesn’t know it yet.

Forget the walls, build something similar to Catalhuyuk. 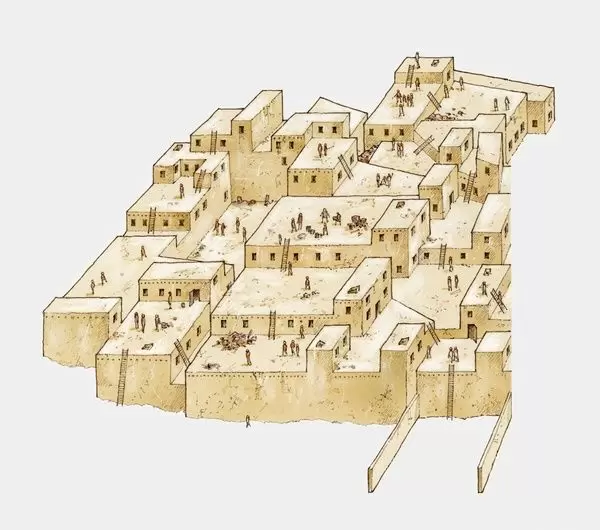 Catalhuyuk is one of the oldest human settlements we have found, and one of the most prominent theories on its design is specifically to keep out predators. With this design you basically use the outer walls of your buildings as the walls of the settlement. There is no access to any of the buildings through sidewalls, but instead through the roof. You could then expand the settlement by just adding more buildings to the outer section. If you are expecting to turn an area into farmland you could simply build your settlement to encircle the land you want to use.

Overtime your settlement may end up looking more like a series of open air bubbles between buildings, but it would definitely be an effective way to keep the citizens protected. If a predator should break through a wall at any point, they would at worst only be able to attack the occupants of that single building. If they break into a farm space they still can't get into other buildings as the buildings around the farmland are walled sides just as the outer buildings. It also has the added bonus of cornering the creature to be more easily hunted. Clearings within the settlement can also be used as grazing land for domestic animals like goats and horses.

The only real problem I see with this is how much land you would actually need. Depending on who you ask, you need anywhere from 0.25 to 1.5 acres of arable land per person depending on diet. If we substitute their diets with fishing and rooftop farming of smaller crops then we can probably bring that number down lower, but it will make the feasibility of this settlement difficult regardless of design.

I hope they have access to plenty of timber, because they will need loads of boats.

fishing
Fishing from the ocean is really your best option in this situation. Coastal fishing from their shores would be the safest option, but this won't feed a large population. They will need to fish the ocean, extensively. The larger their fishing boats the better. In the comments you state there are monsters in your ocean as well, which complicates things. But unless they are Kraken sized octopi, they aren't much of a threat to life. Megalodon sharks etc. could be a threat to smaller boats, hence the need for larger boats, which won't seem as much as a viable target for your sea creatures. Of course, a big net full of fish is a tasty snack for them, but the biggest threat to your settlers here is that they will rip the net and they go home empty handed.

Trade
Trade towns can flourish pretty much anywhere, as long as they have something to offer. From the sounds of it, the megafauna is quite unique to this area in your world, making their carcasses quite valuable. Even when it is impossible to defeat them all, individuals can still be hunted. This will provide you with a fair amount of meat, but also valuable skins, bones, and other species-unique spoils to trade. Trading will mostly be done by sea, or on beach routes, as they are normally the least populated by fauna.

Rooftop gardens
When farmland area is your prime concern, another option is to fortify your farmland, and simply live underneath it, in tunnels or caves. These will also be debatably more easy to defend against large creatures or attacking forces. Living vertical instead of horizontal might maximise the use you get out of the small amount of area you might be able to conquer.

How Good is the Fishing?

Hunting and Gathering on land simply doesn’t support very large populations, and it’s really bad for settlements. The only societies that had large sedentary societies without extensive agriculture were those that had abundant fish stocks.

The Native People of Washington, Oregon, British Columbia and southern Alaska were hunter gatherers who had permanent villages in excess of over 300 people because they had a reliable and abundant source of food in the form of salmon. Whales were also a huge part of the Makah Nations diet.

Since your settlers clearly had ships to arrive in this land, and are on the water they should be dedicating the lions share of their efforts to fishing.

An abundant and large fish like salmon, tuna, cod, or halibut would be a great staple, with forage fish like herring being taken to catch the larger fish or eaten as is. Oysters and clams would be harvested from the rocks and beach, kelp and seaweed would serve as a great supplement and garnish. Whales would make for fine feasts and would also provide fuel and building material.

In short your people should be fishermen and whalers first and foremost, as it avoids the native creatures outside the village walls and it’s a much more consistent and abundant food source compared to simply hunting.

For a final numerical estimate, I would say you could certainly sustain population densities higher than the Chinook, Tlingit, Haida or Makah did simply because these people were actually living really damn well for hunter gatherers and had excess food that allowed them to be stratified societies that even had significant leisure time. So your colonists might be able to double the 300-400 people per village density that the Chinook and Tlingit reached via harsh rationing, better technology and more aggressive exploitation of the environment

Use the terrain to your advantage.

A large valley with steep sides and a narrow entrance could sustain a large population while being easy to defend. Same with a peninsula or bend in a river (assuming your natives can’t cross water). A caldera could also work.

Even just having your back to a large cliff or a body of water would make building walls much easier. Cliffs are also a good supply for stone.