Horses were first domesticated on the steppes around 3500 BC, but the horse would not be ridden directly into battle for at least two more millennia. Instead chariots ruled the battlefields of the Bronze Age, with the great civilizations of Egypt, Sumer, Akkad, Mitanni, Mycenae, Shang China, the Hittites and Vedic India all extensively using chariots. The utility of the chariot in warfare for settled civilization prior to horseback riding is clear, but would the same apply to the nomadic rivals of a Bronze Age empire?

Eurasian Nomads relied on horse riding for their pastoral lifestyle, and for carving out massive empires through horse archery and rapid mobility. It was easy to raise massive numbers of horses on the steppe, given that it was their natural habitat, and the steppe nomads likewise rode horses nearly every single day of their lives, making them far superior cavalrymen to any warrior of a complex state. But would nomads in a time prior to horseback riding be able to compete anywhere near as effective when they have chariots?

My logic is that the nomads still have abundant numbers of horses and other livestock, and that they would be traveling by wagons and chariot constantly, which would give them a significant skill advantage. I think that even without actually riding horses simply working with them constantly would be an advantage.

Would it ultimately be feasible for Bronze Age nomadic pastoralists to utilize chariots extensively, and be a threat to settled people?

•I’m aware that chariots are inherently inferior to cavalry, particularly in regards to navigating rough terrain. But this question is about a time and place in which traditional cavalry just isn’t possible for anyone yet.

•The environments that this occurs in is steppe and river floodplains (ie nice and smooth).

•Again this is a Bronze Age setting.

•The city states and kingdoms the nomads raid also have chariots, but mostly rely on infantry. Consider any of the civilizations I mentioned above for reference

Expanding somewhat on the answer of AlexP, the earliest domestic horses were too small to be ridden in the manner we do, and according to "The Horse, The Wheel and Language", the use of wagons and chariots is exactly how the Proto Indo Europeans spread from the Ukrainian grasslands to effectively conquer the world from India to the Atlantic shores of Europe. 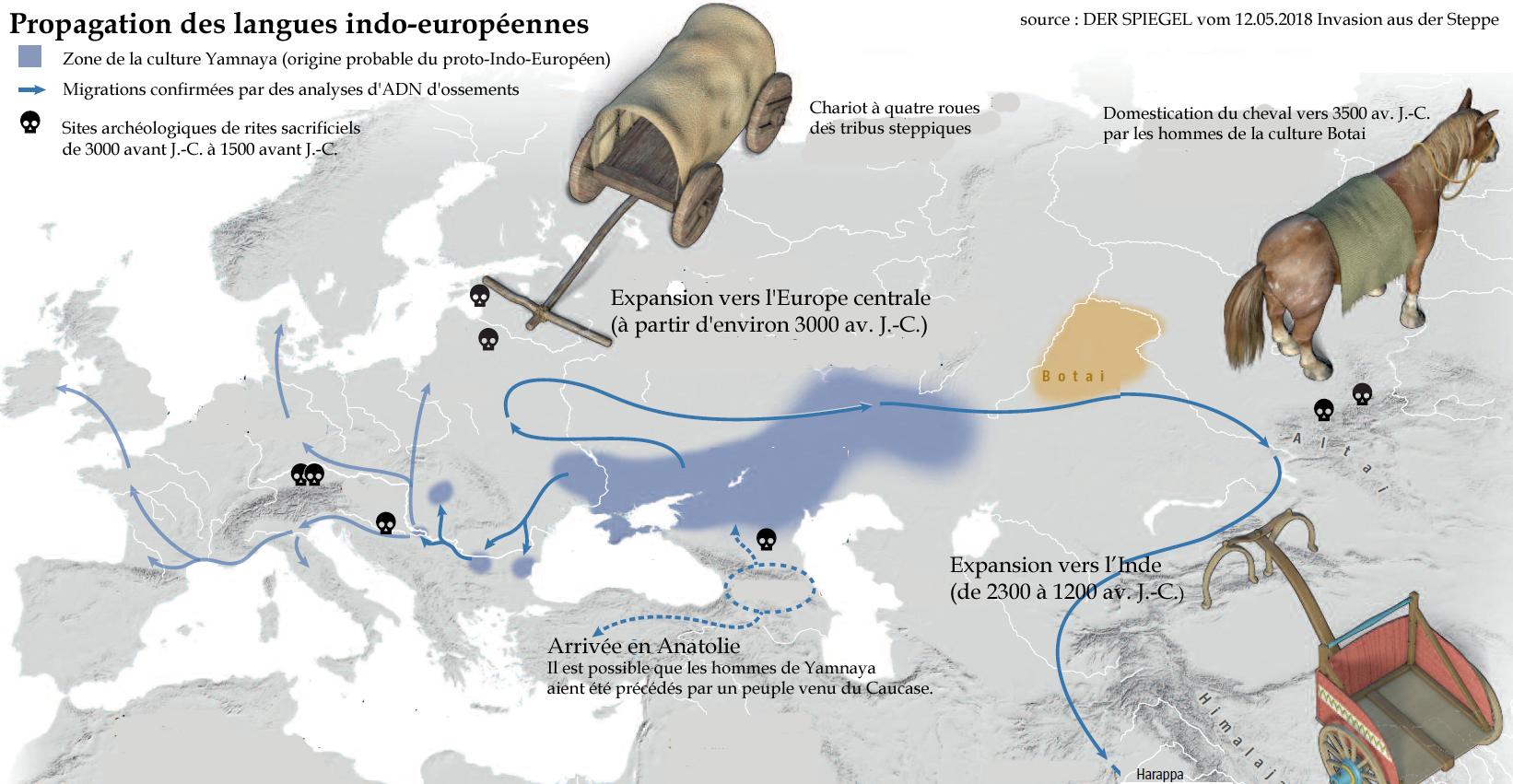 The spread of the Proto Indo Europeans

Chariots had advantages for their users that warriors on foot or even riding bareback would not be able to replicate. A chariot allowed the user to wear armour or be protected by a shield with less expenditure of energy than a walking man, while the small horses of the era would not allow for the use of heavy armour. A warrior as part of a chariot team (most ancient chariots had a separate driver) could focus on using his weapon from an elevated platform (giving huge advantages), would be moving faster than a dismounted man but could also engage in using weapons more effectively than a mounted person, since they would not be using muscular strength to control the horse at the same time they were using a bow or javelin.

The Proto Indo Europeans likely developed the idea of a chariot as an extension of wagon technology, realizing that the high platform of wagons allowed them to see farther than on foot, and a light wagon drawn by horses could move fast enough to allow them to keep up with their flocks and protect them from marauding wolves and other predators. It would be a short step to go from wolves to "other" tribes and settled farmers on their treks...

Now the Proto Indo Europeans were actually pre to very early Bronze age (and interacted with people's on the edge of the Steppes who had Bronze technologies), but the general effect of a people who could effectively move long distances through the use of wheeled transport (logistically, the use of wagons allowed the Proto Indo Europeans to move as entire families, clans and tribal groups rather than just raiding parties. Bringing your family, herds of sheep, tools and supplies made the Proto Indo Europeans far more versatile and effective when reaching areas they felt were suitable to settle in, since they arrived all at once with everything). 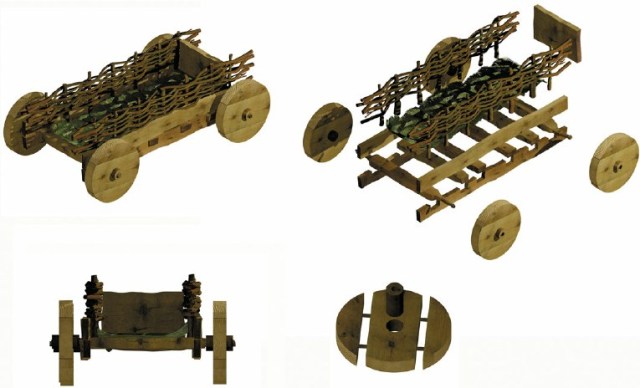 We also should remember that Proto Indo European people were not using the sort of light war chariots that we visualize from Egyptian art or watching the movie Ben Hur - these would effectively have been smaller versions of the sorts of wagons that the rest of the clan was following in, and likely carrying a three man crew (driver, archer/spearman and shield bearer). While we would see this as ridiculously slow by modern standards, for early Bronze age farmers standing on the edge of the field, these would be moving at amazing speeds. Bronze age armies on foot would be rapidly encircled and shot down by arrows and spears while unable to move fast enough to either counter or escape from the invaders. 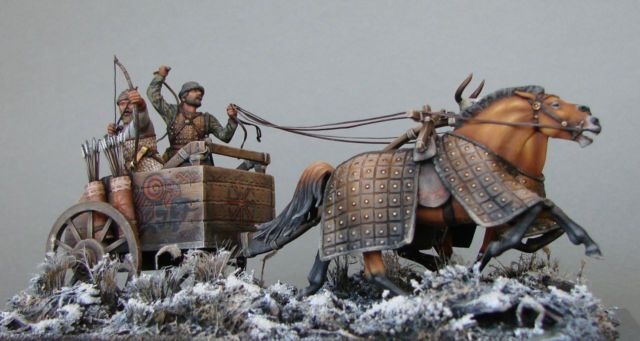 So it is entirely possible, and indeed probable that chariot warfare was practiced by the Proto Indo European peoples as they spread from their ancestral homelands in Ukraine to India, the Middle East and Europe.

A chariot suitable for war is not a good weapon for a nomadic group of people. For the time period it is fairly complex piece of machinery and you would need to constantly carry it around with you. Horse riding archers are just much easier if you don't have a permanent city with a workshop to build the chariots and some places to store them when not needed. I would go as far as saying that even if a nomadic group captured a war chariot from a settled civilization they would not take it with them because it is to much hassle for the gain.

Horses were initially used for drawing wagons and chariots. Riding came much later.

The Proto-Indo-European language had a word for "wheel", *kʷékʷlos; both wheel and cycle are descended from it (one is inherited in direct line, the other is borrowed from Latin, which had borrowed it from Greek). Wheeled wagons are hypothesized to have been one of the major enablers of the ancient Indo-European migrations out of the Pontic steppes.

The Standard of Ur is a Sumerian artifact dating to the middle of the 3rd millennium BCE. It features a "war" panel and a "peace" panel; both are intricate mosaic works, made with red shells, lapis lazuli and red limestone. The "war" panel includise horse-drawn chariots, but no riders. (Picture from Wikimedia, public domain.)

The oldest actual remains of a horse-drawn war chariot date from the beginning of the 3rd millennium BCE; they were found in the burials of the Sintashta culture of the Eurasian steppe, the immediate predecessor the of Andronovo culture which is generally considered to have been Indo-European, possibly representing the earliest speakers of Indo-Iranian languages.

At the Battle of Kadesh (13th century BCE), the Egyptians and their Hittite opponents brought upwards of 5,000 war chariots on the battle field.

Not the answer you're looking for? Browse other questions tagged reality-check warfare vehicles bronze-age nomads .

7
Bronze age Aztecs?
3
How big would a giant pig need to be in order to carry a 10-foot tall humanoid on its back?
1
Ice Age Cavalry
12
Could domesticated mammoths sustain a group of nomads
5
Alternative to horses in a dry climate
7
Modification to Chariots for Heavy Cavalry Analogue for 4-armed race
4
Is The Use of Mounted Infantry a Viable Tactic for a Nomadic Empire?
7
Horseback Travel in an Unpopulated Pacific Northwest
1
How can tribes consistently defeat imperial armies?