Could a creature use both infrasound and ultrasound?

I was thinking of a creature that uses ultrasound to echolocate and infrasound to communicate with its species.

The current idea is a dog-like creature that hunts in packs, due to a large avian predator they developed infrasound to communicate at a pitch that cannot be heard by the predator and their prey.

The Dog-like creatures are also blind so their main sensory method is ultrasound for echolocation.

Can a creature make both ultra and infrasounds? would they need a specific shape of body to achieve this?

Edit: I don't think any animals use both very low or high frequencies, creatures like an elephant or giraffe have long resonance chambers to create the low sound, would a creature need two resonance chambers one shorter one longer, would a dog-like body be able to make both sounds?

Great Curasows have the largest vocal range that I know of, their range runs from 100 hz up to 7 Khz (Source), and I see no reason why that range couldn't be increased or shifted to span both ultrasound and infrasound. Also, there's no reason to think that you need ultrasound levels of sound in order to echolocate-- there are documented cases of blind humans using echolocation using their limited vocal range.

Oh nice, something I know a bit about. Let me ramble on about this great length.

What does this have to do with anything?

Hence, creatures that use echolocation use ultrasonic frequencies.

But, high frequency noise is terrible for communication, because you basically need line-of-sight (also it gets absorbed by the air) so your range is low as hell.

So your dog things will need two hearing systems, and two noise generating systems, one for each purpose.

Low frequencies carry quite well through solid objects, so maybe they transmit their communications into the ground by impacting the ground, and hear with their feet. Think about a cowboy putting his ear to the ground to hear a stampede or touching the rails to check for trains. Or go the more traditional route and have a resonating chamber like elephants or whales, but this would need to be quite big and would use a lot of energy to use. It would probably want an opening, like a big nostril or something.

The high frequency organ could be small, but would need to be on or near the surface of the body, so that the high frequencies can escape. Think about a bat's face, or a cricket's legs. Maybe, just like crickets, they generate sound with friction on the surface of their bodies. The ears for high frequency should be big, as they need to collect as much energy as possible, and giving them a complex shape will help with detecting directionality (which I could talk about for as long again).

I should stop now, but I could carry on for as much again very happily.

So, as long as it's broader than the hearing range of prey and predator, you can safely have a creature that is capable of producing sounds that are impossible to hear from both sides of the spectrum.

Echolocation frequencies are tailored to the environment. In good atmospheric conditions and to capture relatively large insects, some bats have echolocation frequencies as low as 11-12 kHz. That's a reasonably low range to aim for, particularly when you consider that it's sufficient to pluck insects out of the environment, so it's still a high resolution scan of the surroundings.

Infrasonic communication, in order to be effective over long distances, needs to be very loud. This is why you need a relatively large animal such as an elephant, giraffe, whale in order to really take advantage of this type of communication by making it loud enough. You might want to aim for an infrasonic range similar to that of elephants or giraffes since they're terrestrial animals. I think that whales can afford to go a bit higher with their songs (30~40 hZ) due to the sounds being propagated by the medium of water rather than air.

You might find this website useful if you want to go very deep into the science of animal communication.

Infrasound and ultrasound are defined as sounds that are too high or too low for a human to hear. The same goes for infrared and ultraviolet light: they are beyond a human's capacity. But it is easy to think of a creature that has simply broader range in their hearing or vision. And if it's broader, there's no reason why it should be limited to one side of the spectrum. Those limits that we use are fairly random, and have no meaning without a human as a reference frame.

Sure. It's called a cow. 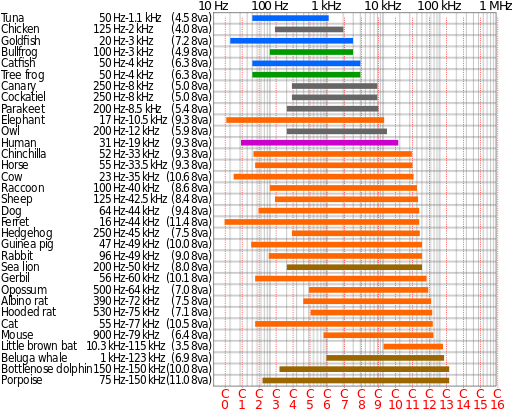 This puts the ranges at:
31Hz-19kHz for us pitiful humans.
23Hz-35kHz for our new overlords, the cows.

34
Why would the mouth of a creature evolve to be away from the head?
7
Alien moss with bee-hive like drones and warriors
14
Could a creature carry its own biome and be self-sustaining?
6
Feasibility of a species based on Yog Sothoth (HP Lovecraft lore)
4
Are flexible digits viable for both running and climbing?
7
Could a creature use lightning/electricity as its energy supply?
3
Is my Bioluminescent, Four-legged, Bat Creature Possible?
2
Is it possible for an animal to have both air-spaces and lungs?
1
Could a creature use its tail to move on land?