Is it believable to have a spaceship spin around a weight for artificial gravity?

In my narrative universe, there will be ships that use a 1g acceleration for artificial gravity. However, when they are not accelerating (whether on a longer journey at a constant velocity or simply "anchored" at some random location) is it feasible for the ships to extend a weighted anchor and create a spin for artificial gravity? I am aware this tether would need to be super strong and very long. Is this a reasonable concept, or should I find another way for the crews to have relative comfort in space?

Yes, but there are conditions.

If we look at the formula for acceleration simulating artificial gravity:

We see no actual requirement for for a full circle. Any point on the path of rotation works, regardless of whether or not the rest of the structure is there, as long as structure exists to confine loose objects and transfer the force back to the centre of rotation.

The most classic form of this is the grand circle. This allows you to walk around in a larger space, and offers nice things like structural redundancy, but a single living capsule connected to a tether cable and spinning it around a given point will result in the same apparent gravity as an entire wheel.

We do however have to keep in mind some things such as the Dzhanibekov effect or Tennis racket theorem when designing our layout of masses.

We also probably want to be smart about what we use for the masses. Carrying a lump of steel around for no other reason than to be a counter weight is counter productive... It is probably a better idea to design something like a habitation module that is played out and spun around an engineering core.

Even splitting the craft into two sections and spinning them up with thrusters can work.

As for the needed strength of the cable: As long as you aren't placing large masses 'outside' of the habitat's gravity 'ring', then the cabling needed to tether the craft is the same as you would need to safely lift the module on earth.

Yes - This is a very reasonable way to make artificial gravity, without requiring too much support structure. 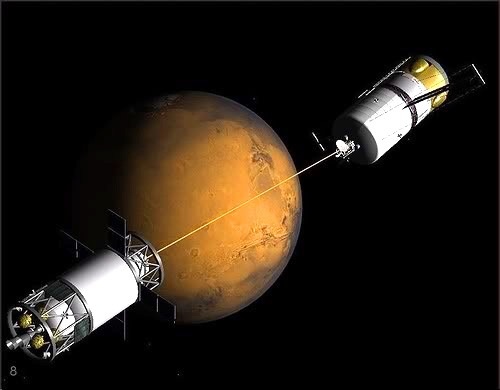 There have been early studies of this form of spacecraft, however it does encounter the following issues that (although not insurmountable) need to be considered and may reduce their practicality/viability:

However it is an efficient way to produce gravity without the requirement of ring-like structures, and may enable the increase in diameter to allow non-Coriolis artefacts when in operation (ie. reducing the need for a large diameter ring and all the overhead associated with them to supply the same benefits).

I would imagine it would be a good way to do manned long distance missions in smaller spacecraft with not too many directional adjustments required.

If I understand your question correctly, when the ship is under flight he crew experiences 1g due to the ships acceleration. And when they are in orbit you want. them to have the same level of comfort. It seems like you don’t want the orientation of the crew space to change between traveling and orbiting. So, sure, if the ship had a mass tethered to the nose of the ship, then they could set up and orbit that would give something like 1g in same plane as when the ship was in orbit.

Unless the mass was 1000 to 1 the mass of the crew space, the orbit would be very wobbly, and require correction.

It seems a more realistic design to have the crew space realign itself so they have 1g in one plane while traveling, and then, align to a radial fashion when the ships spins on its center axis to generate artificial gravity in orbit.

Not the answer you're looking for? Browse other questions tagged science-based science-fiction spaceships artificial-gravity or ask your own question.

10
FTL in a relativistic universe: can my scheme be exploited to make a time-machine?
13
A weapon(preferably hard scifi) that will limit velocity of space ships in a wide region temporarily
9
Non-Spin Artificial Gravity
2
Is it worth having artificial gravity by propulsion, in orbit or in “free space”?
4
Spin gravity on an abandoned ship
15
Constant acceleration as artificial gravity. Would flipping over halfway still be comfortable?
5
What is the limit of acceleration of a gravity drive?
10
Proper combat distance scaling for a sci-fi space opera tabletop setting
3
Black Hole for ship artificial gravity?