Could a shark theoretically exist at the size of a blue whale? Blue whales are apparently the largest animals to have ever existed, at 30 m long and 200 tons weight. There are many species of sharks, but I'm interested in species such as Great White sharks that are capable of attacking and feeding on large animals such as seals, squid etc.

Basically I'm wondering if an animal that feeds on squid and fish could survive if it was as large as blue whale, or if only baleen animals can survive at that size.

reality-check creature-design
Share
Improve this question
asked May 9 '15 at 5:44

Blue whales get up to 30m long. Fiction should have no trouble reaching that size, as nature got you at least half way there. The Megalodon was estimated to be 18m long.

And it's a whole lot bigger when the fisherman tells the story!

The main problem isn't the theoretical maximum size of the animal (as hinted already, that can be achieved in earth gravity).
It's keeping the animal in food. A blue whale is a slow filter feeder, gulping up tons of plankton while slowly swimming through the water.
Sharks are active hunters, would need very large prey items if they get that large.
And that means an entire population of megafauna in the oceans. Such of course existed at the time of megalodon. And that one died out when the saurians it preyed on died out.

So your ecosystem would have to be such that megafauna exists, and has the plant and animal life for it to feed on, in order to sustain the shark population.
The few blue whales (and other large whales) in our oceans will probably not do, they're too few and far between to provide reliable sources of sustenance to a viable population of megasharks.

There would have to be a reason for a shark to get to that size, but there isn't one on Earth today. Sharks are successful hunters, and thrive at their current sizes unless impacted by change in climate and human intervention.

So, if you place a large number of extraordinarily sized prey (or large volumes that require a large mouth), then it would make sense to me to have a large predator like a shark.

There are things like the megamouth shark today. Cetations evolved filter feeding from the same ancestors as toothed whales. You just need to find a tissue that can be deployed for the purpose. Mammals don't have gills anymore so there are "gill arch" structures that can be reused. Fish already transformed some gill arches into jaws and ears. Some fish have a second set of jaws in the throat, so that suggests something that could turn into a filter.

Then you need adaptive radiation to promote rapid evolution. A completely new environment or other major factor that affects the lifestyle would allow rapid transformation, as cetations did at breakneck speed (an extreme case) when they returned to the sea.

Filter feeding would then promote large body growth to be more effective at it.

Yes, but there are a lot of implications with that. There is a law called the Square Cube Law that says that : When an object undergoes a proportional increase in size, its new surface area is proportional to the square of the multiplier and its new volume is proportional to the cube of the multiplier. To increase feeding space by simply scaling the creature up is super bad, and so it is restricted to its max size that which it can contain and live. If there were a huge fluctuation in large prey items, then maybe the mega shark would be feasible

I envision a world with large herds of huge herbivores in contiguity with shark habitat - bays or estuaries. Just as carrion from land animals supports semiaquatic crocodiles, quantities of carrion from huge animals that die in the water could support scavenger sharks. The more meat you can fit in your body the longer you can go between meals and so there would be evolutionary pressure to get big enough to eat a lot at once. These things would need to be able to fight, but mostly with other scavengers interested in the carcass.

Great white sharks do that today.

Typically, the sharks approached a dead whale slowly, swimming around it and mouthing it at different parts of the carcass. Feeding usually started at the extreme rear body and tail of the whale, then proceeded to blubber-rich sections of the carcass... A shark could continue feeding for over 6 hours, until it reached a point where it could eat no more. As if intoxicated, the sharks could not lift their heads above the water, while half-heartedly nudging and mouthing the carcass, seeming too weak to bite and tear at the flesh. Eventually, they would give up, floating to the depths.

The largest sharks in the fossil and extant record are the whale shark and the Carcharocles Megalodon or "Megalodon" shark. But jaw and bone examples indicate the maximum theoretical size of a megalodon could approach 70 feet and push 120 tons. His size is solely dependent on the success of the creatures ability to feed itself. From an evolutionary biology perspective, the bigger herbivores got, the larger carnivores got. 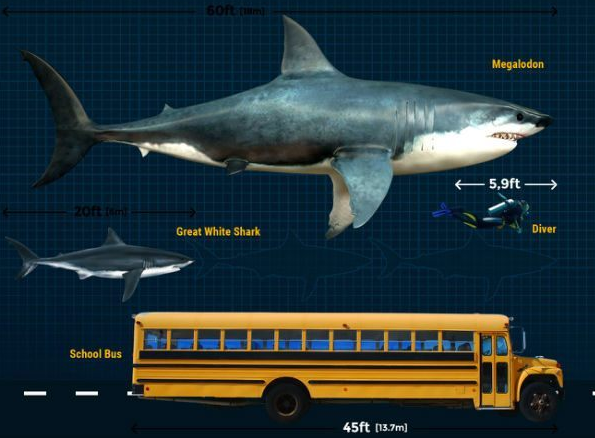 As mentioned in other answers, the size of the preator is largely determined by the size and availability of the prey. If the oceans are full of pods of whales, then an extremely large predator would become viable, since there would be a reliable supply of food.

The other issue to look at is "why" a predator has to evolve to such a size. On land, mega predators arise wherever there are megafauna, such as the last ice age. Megafauna are advantaged in that environment since the square-cube law means that they have less surface area relative to their size to radiate heat, so a mammoth is much less likely to suffer hypothermia than a lemming. Since the prey animals are so large, a much larger and more agressive predator is needed to successfully hunt them, such as dire wolves, sabre tooth tigers and short faced bears.

Sabre tooth tigers suggest another thing in this ecosystem. Large prey animals might need different methods to attack and kill. Biting and holding the neck to choke the prey works for a tiger to kill an antelope, but would be totally ineffective for a mammoth. Sabre tooth tigers evolved long stabbing canines to deliver deep puncture wounds that caused prey animals to bleed out. A possible analogue in your wourld would be a narwhal, although the modified tooth in that case is used to lift molousks from the sea bed. The swordfish suggests an alternative to deliver slashing blows to prey, weakening it to the point that the jaws and mouth can come into play. Other methods might suggest themselves as well.

So imagining megapredators really involves thinking about how the entiire ecosystem works. why do such large prey animals exist, and how do the predators deal with them. Other questions like scavengers and parasites should also come to mind in a fully developed ecosystem.

Blue whales are proof that sea life can get that big. With a little genetic tampering, there is no reason we couldn't militarise a whale into a kick-a$$ 100 foot pseudo-shark. Add teeth and abrasive skin, give it keener hunting senses and a bad attitude. Whales are already used to eating all the time, so you're halfway there.

15
Mermaid Buoyancy: Oily Livers, Swim Bladders and Lungs
2
Is it feasible for a Dune-style sand worm to have silica scales?
10
How large could my sea serpents be?
2
How would giant penguins affect the arctic/Antarctic ecosystem?
13
Plausibility of squid whales
4
Aquatic lizard: Is being warm blooded essential?
22
Would a carnivorous diet be able to support a giant worm?
6
Size cap for alien sky-whales on a high gravity dense atmosphere planet
6
Plausibility of Tribe-Sized Megafauna
4
Whale-sized electric eel shock?