Elemental magic - which is strong against which?

In a fantasy world full of magic, i want the elemental forms of magic to be strong against one another in a symmetrical way (meaning every element has the same amount of weaknesses and strengths). I do not specify how many strengths and weaknesses they should have, even though i would be happy to let each one be strong and weak against two others respectively. The elements are (fire), (earth / rock), (water), (air), (ice) and (metal / ore). Feel free to rearrange and reconnect them in any way that fits.

I am currently rebuilding an elemental magic system in a game i am playing, but i am having problems justifying some of the elements being strong or weak against some others.

First, the setting: If anybody knows it, i am building custom rules for The Dark Eye, a tabletop-rpg game that comes with its own setting. It is high fantasy, there are elves, dwarves and much of the other stuff you would expect from a tolkien-like setting. If thats any help, the backstory of magic becoming part of this world is a certain goddess breaking the rules and also a hole into one of the borders of dimensions and letting the power of magic flow into the mortal plane. It manifests in many ways, but the wizards guild is teaching the way of controlling it by weaving the flow of magic through willpower, gestures and incantations. Elemental magic is just one kind of many, but it is the one i am most interested in in this question. It allows the wizards to summon the element in form of attacks or elementals.

Because i do not want to rework all of the games rules i am bound to the choice of elements that exist in this world. I already tried my best thinking up how they relate to each other, but there are some connections that i am having trouble with. I drew up a chart of the elements and how i think they could relate to each other: 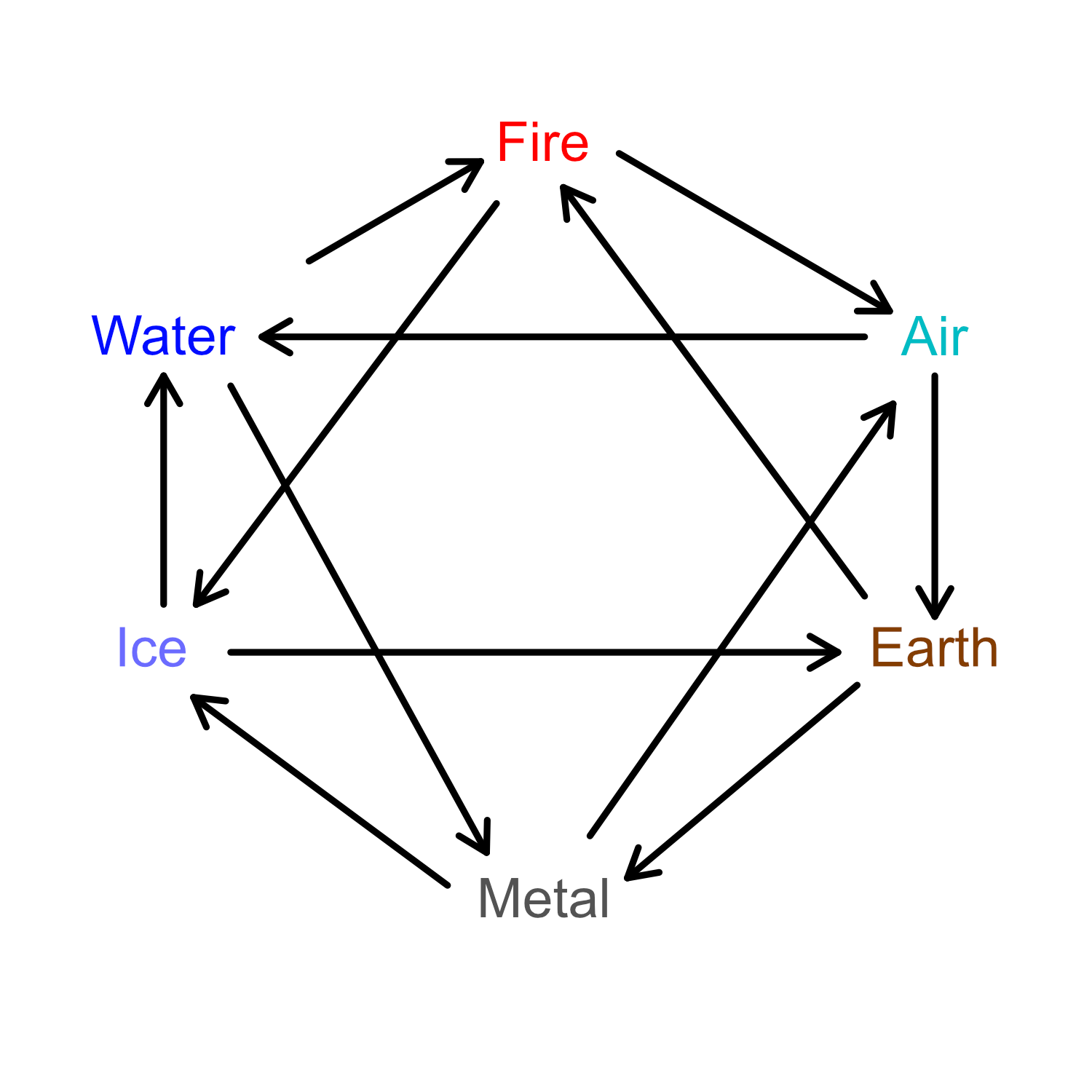 Fire -> Air - I maybe thought about air providing more fuel for the fire, thus increasing its strength while trying to attack or defend against it, but that sounds a little bit like an excuse. It's ok compared to the others, though.

Air -> Earth - Now, air could dry out earth to turn it into dust and blow it away, but rock also belongs to the earth element and really makes me unsure about this connection.

Earth -> Metal - This is one of the real bad candidates. I have no idea how to explain this, apart from metal not being too good at destroying earth and stone in a medieval world. This is true the other way around too, though.

Metal -> Air - This, too, gives me a real headache. I mean, metal is kind of immune to wind, but it is not particularly strong against it, either. Maybe attacks and elementals made from wind get disturbed by the solid structures metal forms? But then, earth would need to be strong against air, too.

Ice -> Earth - Frozen earth is more fragile? This one is not as bad, too, i guess, but could be a lot better.

Air -> Water - Honestly, i can not think of anything better than air "cutting more sharply" than water. I am very much not happy about this one either.

I kept rearranging and reconnecting these elements, but i just could not find a constellation that was satisfying. I am looking for someone to help me fix this constellation or provide an explanation that removes my doubts about my solution.

To provide an answer that uses the six elements as provided:

Note: I am not at a place where I can make nice pictures, so I apologize for not having a lovely infographic of elemental relationships.

To summarize, there are three cycles of each element having strength over the next one. The three cycles (which do make a nice mystic circle thing when drawn out) are:

Air -> Earth: Air can erode the earth into sand and dirt, objects that while they are still earth, are less solid than the element suggests. Air can do this and remain untouched by the earth by virtue of flying over it. Air is also quite capable of just flowing around earthen barriers when wind power can't just knock it over.

Earth -> Fire: Dirt is known to put out fires by suffocating them. Likewise rocks are used around campfires to hold heat to be released when the fire dies out. This indicates that Earth should be able to take the punishment by Fire without losing effectiveness

Fire -> Air: Fire requires air to burn and unless one uses enough air pressure to actually blow out a fire, all blowing on a fire will do is stoke the flames. Air magic is not just wind, it is also contains magic that provides fire magic with additional fuel that the winds of the spell feeds.

Metal -> Ice: Ice is less durable than metal and can be chipped and broken apart by metal tools. While the cold can make metals more brittle, cold alone cannot turn metal back into earth on its own.

Ice -> Water: Instead of thinking in the traditional way of frozen water versus liquid water, the logic is the liquid phase of matter versus the cold. Cooling liquids will solidify them, depriving of them of their ability to flow freely1. We call the elements Ice and Water because it is the most common expressions of these elements as opposed to the only ones.

Water -> Metal: Water can be surprisingly good at corroding untreated metals and with enough pressure, water can even pierce metals. Also, water is good at getting into the cracks in metal tools and corroding them from the inside.

Metal -> Earth: Metal, most likely being processed Earth, is used to break apart earth in the form of tools. From a magical perspective, Metal magic is harder and/or more solid than Earth magic, and that is what is reflected in this relationship

Earth -> Water: The ground absorbs water and interferes with its desire to flow. The mud that results is controlled more by the earth's stability than the water's flexibility. If you go this route, then things that spawn from the earth like plants also take in water, further denying its ability to flow.

Water -> Fire: Water, like earth, is also used to extinguish fires. While yes, there are some fires that can't be put out by dousing them, the classical way in which we view fire is susceptible to water, and this water magic will trump fire magic.

Ice -> Air: Like with Water, the cold magics that ice actually represents cause the gaseous Air to slow down. Eventually with enough cold, the air itself liquefies and is no longer really air anymore. On a more physical level, when ice is created, it can entrap air into little bubbles. The physical part is a bit of a stretch, but it is something that can be observed.

Air -> Metal: Air, like water, is good at corroding metal. Oxygen, which makes up about 20% of air, is really good at it and is why one does not find iron in its natural state. Likewise many other metals oxidize in air and part of gold's appeal is that it does not do this. Also like with Earth, air can do this and remain untouched by metal by retreating into the sky again.

1Yes Helium, we know you don't solidify that easily. You can now stop laughing from your corner of the universe.

Step 1: As per my comment, swap [Ground/Rock] with [Wood]. It still lines up with classical elements, it's more distinct, and it makes our lives easier when it comes to knocking these off.

Now, let's knock these out of the way. Most of them are easy, but we wind up with two tricky ones.

Now, for the tricky ones.

Air beats Metal. This is a case of 'mobility vs stability'. Metal is inanimate, thus wind can just fly around the metal. Or, to put it another way, metal can't stop the wind and wind doesn't need to stop metal.

Ice beats Air. This is because cold makes things heavy, i.e. wind included, and cold heavy air will die down. This is more cold dampening air's power than outright beating it.

Elementals are strong or weak according to their environment.

It might be down to Balance rather than one beats the other.

The first step might be to eliminate some of your elements. Ice is really just Water in a different phase. Wood is just biologically structured Earth. In a similar fashion, Metal is just a ultra-homogenized Earth. So you might want to go to the classic alchemical square of Water, Earth, Fire, and Air. You can then create another square around them as you combine the elements. Water and Air for Ice. Fire and Earth for Metal, Earth and Water for mud or clay, and so on.

On the order I gave them, you can see and logically explain the opposition. You don't necessarily have a clear situation of one being greater than the other, but you do have a balance. Water will not always beat fire. If you throw water on a fire, you get Steam. The fire is put out, but the water is also consumed and changes phase into something that burns. Not enough water on a fire, it just keeps burning. Too much, and it gets snuffed. Same thing with Earth and Air. A Stone column stands fast against the wind, but will get ground down or toppled by that same wind over time with erosion.

So you can draw a small square with the primary elements in the center with the logical oppositions to create the order. Then an outer square with the points of the inner at the midpoint of each side. The points of the outer will be the combination of the two core elements and will have an equal opposition across the way. In my example, Fire and Earth create Metal and Air and Water make Ice. Good metal may damage ice, but get metal too cold and it can become brittle and shatter. Earth and Water can be clay, but when you apply fire and air to create super intense heat, you get Ceramic, which will block the same super intense heat but is brittle and can also crack and explode it there are impurities. Just try to keep balance between them instead of just thinking of it like an elaborate Rock Paper Scissors Lizard Spock kind of thing.

Keep in mind as you get elaborate with your diagram that you can also create strange stuff when combining three elements even though two will be in opposition. Take some plants from the Earth category, add Watter, and then fire. The result is soup!

Not the answer you're looking for? Browse other questions tagged magic balancing-magic-systems classical-elements or ask your own question.

4
'Magic Came Back' catastrophes - Fire-based Disasters
18
Fire is gravity for fire Elemental
6
Creating an elemental “fusion” scheme
4
How to Represent Platonic Solids in 2D Magic Circle Construction
19
How would a group of elemental mages defend against guns and artillery of late WW1?