Army made up of entirely (or almost entirely) bowmen? [closed]

My setting for this question is as follows. Nation has very little access to mass amounts of metal for armor or large bladed weapons, but all kinds of wood, string, feathers for fletching, etc. Also, this country for insert reason, there are many realistic possibilities can't have a large standing army. Therefore, it defends itself by requiring all male citizens between the ages of 15-45 to maintain a bow and arrows, practicing weekly both as an individual for accuracy, and with a squad (known as a "flight") for discipline and speed in a mass firing, "blot out the sun" situation. Because of the fact that they have relied on the bow for such a long time, they have essentially perfected the art of bow and arrow-making, and have long-ranged, extremely powerful bows as well as access to any type of armor-piercing arrowhead you'd like, such as a bodkin.

Would an army, in any ancient up through late medieval period, made entirely of highly skilled, well-equipped, yet unarmored and unsupported bowmen have a chance against a well organized enemy army?

Additional, potentially pertinent information. They have seasoned commanders, who understand how to use terrain and formations to their advantage. Any battle they fight will be defensive, and their borders are well-protected by either walls or swamps. Enemy forces will likely be smaller most/all of the time. Arrow supply isn't an issue, since they rely entirely on the bow, they have arrow reserves that are essentially infinite. Additionally, since every male citizen is required by law to be available for active service at 15, and starts training even younger, the learning curve for mastering the longbow isn't an issue either. However, again, if the enemy makes it to their line, their melee ability is pretty much zero.

Bonus points if you can advise on what type of bow they should use, whether a standard longbow or something more like a composite bow would be better, as well as what type or types of arrows.

Trained, armoured archers are a major asset for an army but there are many things that an army needs to do that they cannot. Unarmoured archers are still useful, but considerably less so due to their vulnerability. By the late medieval period, practically all archers were wearing armour and were armed with melee weapons so that when the enemy did close in they could fight effectively. Even given the miraculously favourable circumstances that the proposed archer-only army enjoys (always outnumbers their enemy - more on that later - always has good defences to fight from, always has plenty of arrows), one platoon of invading armoured archers wearing a mix of plate and "chainmail" will mop the floor with two platoons of unarmoured archers.

However, any competent enemy will not send in an outnumbered force, no matter how superior their equipment. The OP has specified that "Enemy forces will likely be smaller most/all of the time." In a word - no. General principle - the defenders choose the ground, the attackers choose the time. The time the attackers will choose is when they have more troops.

When the archer-only nation is attacked, their attackers can be expected to use the techniques developed throughout history for reducing defensive fortifications using engineers and siege engines. These techniques include large mobile shields and barricades specifically designed for protection against archers. Protected by such items, the engineers will undermine the wall and/or the trebuchets will smash breaches in them unopposed - unarmoured archers cannot sortie out from the walls to attack the besieging forces without being cut down. Once the walls are down the enemy infantry will be able to move forward using shields for protection and seize the walls. After the walls are down then cavalry can roam the nation doing what they like - foot archers will lack the speed to interfere with them effectively. Once all the fields are burning, the archers will be forced to negotiate the terms under which they will serve their new overlords who understand combined arms operations.

However, the premise behind the nation is rather implausible. A nation entirely surrounded by either swamps or a hideously expensive wall, which cannot afford a large standing army to defend the wall but can afford to always have all possible defensive locations fully supplied with effectively unlimited arrows? Not very believable.

Regarding types of bows and types of arrows - both will depend on:

Materials - English bows were often made of yew or ash because these were the good bow-making woods available in England. Chinese bows were made from different materials because different trees grew there. If no trees are available, laminated animal bones can be used to make a bow. In practical terms, the botany and/or zoology of the area will dictate what the bow is made of. Ditto for the shafts and fletching of the arrows.

It depends on your logistics, your terrain, your commanders, and your intelligence, amongst other aspects

There are many ways to wage battle. The elements you describe, being an archer-only army, a swamp / jungle, and sufficient resources - are all parts of a battle, but battles are won with more than these - logistics, a smart commander, good intelligence and ability to use terrain to advantage amongst them.

The Art of War is an ancient text that lays out some of the complexities of battle, where many factors influence outcomes, not just one aspect. Some of the main broad messages include:

So I would say: Yes, you can have an army of archers. However outcomes of battles are complex, and I would say the following points would enable your army to best operate:

To answer your other question: I would use as many different bow types and arrow types as possible, combined with as many different training as possible too, to widen the capability of your archers. Also your troops need to be trained in asymmetric warfare methods, as well as coordinated methods, to ensure a wide range of strategies are able to be deployed.

First - any battle would be offensive. Need to be. Otherwise you would face forces that comes toward you. So anyone who would be (cause of the movement) under the lobe of arrow flight would be save.
And the archers would be ripe for cutting.

So you would need to have time, place and wind on your side. Only available if you are attacking.

Arrowheads - you need to change your thinking. You cannot have wide access to large amount of quantity and type of arrowheads and complain they don't have materials for swords. Or you stick only with stone/obsidian and wood/bone arrowheads.

And in the first link in the background you see the reason for need to be offensive. Any halfwitted dude with shield will be protected. only way he would not be is when he don't expect a battle.

No, army solely of bowmen will not be effective. Bow, and especially longbow, as a military weapon is highly overrated. Mounted archers were effective, but only because they were supported by heavy cavalry and infantry. Likewise, English longbowmen were supported by men-at-arms, and had the advantage of choosing the terrain for battle. If you only have bowmen, all the enemy has to do is send heavy infantry protected with pavises / tortoise to push them out of position, and then run them down with cavalry. Problem solved!

Generally speaking, a combined-arms army will beat a specialist army 90% of the time.

Also, there is no reason why you cannot have a combined-arms force with citizen militia. Take a look at Swiss militia, armies of Italian city-states, or even Byzantine thematic army (though last ones were in fact professionals). Further, English longbowmen were, in fact, trained for close-quarters combat and equipped as such. They were not as good at it as professional men-at-arms, but they were not helpless either - their "melee ability" was pretty much definitely well above zero. At Agincourt IIRC, English longbowmen actually ran out of arrows - and even so, English men-at-arms in the center were hard-pressed by the French, until English longbowmen whipped out pollaxes and daggers and attacked French men-at-arms from the flanks.

I think it may be difficult to win a battle, let alone a war with bowmen -- at Agincourt it was the mud and the skill of the English/Welsh archers as footsoldiers that carried the day. And the French won that war when they realised that the bow was a defensive weapon and they would win by not attacking. You will need an offensive arm too. Nothing wrong with adding spear/pike/halberd to the mix.

But you have to put them on horses. 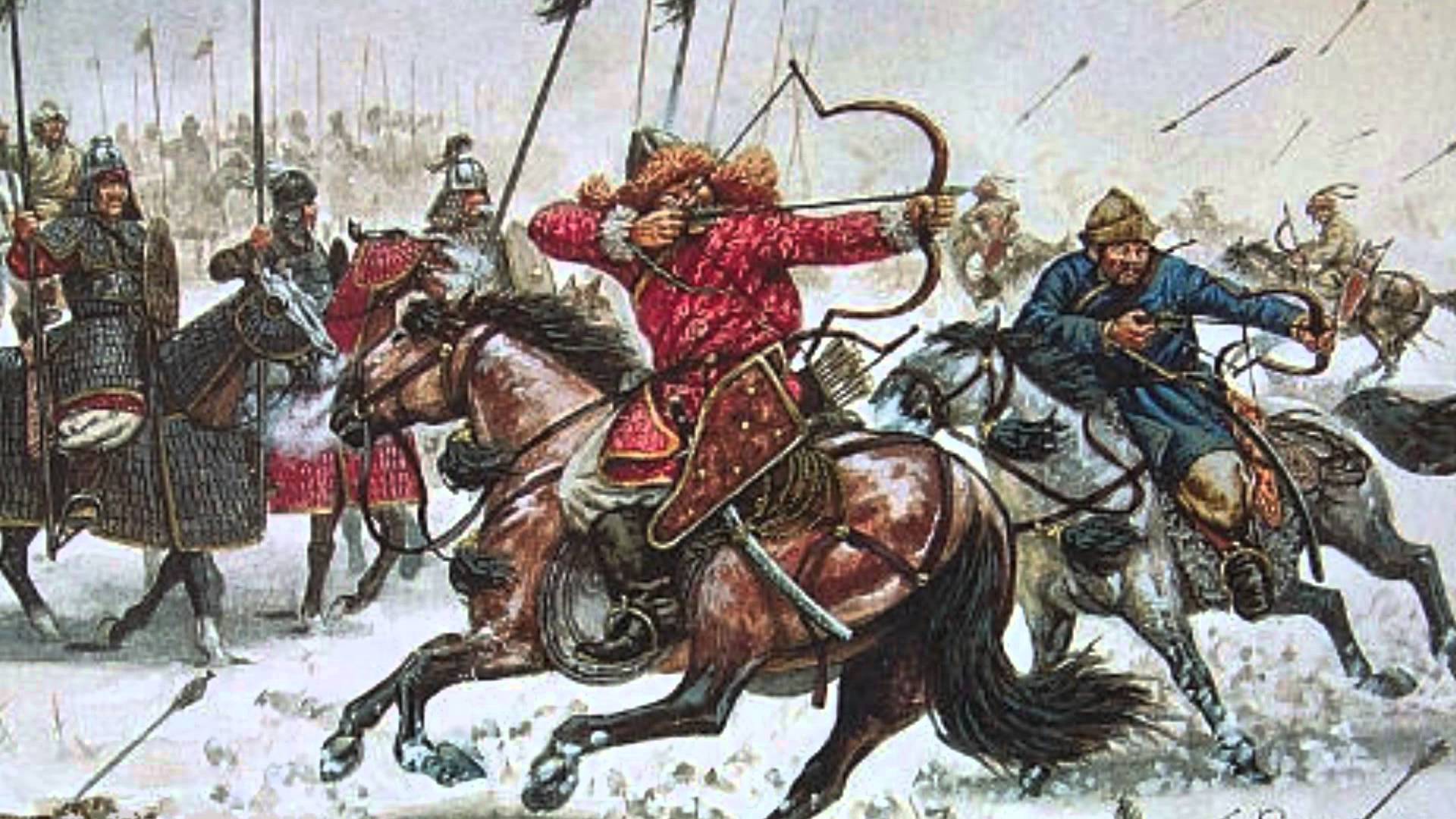 Not the answer you're looking for? Browse other questions tagged warfare or ask your own question.

53
Wooden sticks are the only allowed weapons in a technological society - how far would these weapons have progressed by now?
26
Can a hero survive many battles in a realistic medieval fantasy setting?
25
Why can't a Tercio use crossbows and pikes?
38
Realistic, logical way for men with medieval-era weaponry to compete with much larger and physically stronger foes
8
Plausibility and performance of a composite longbow
3
How to win a war with unarmed soldiers?