Could another intelligent space-faring species have grown up on Earth before humans, and could another arise if humans all left?

If humans have evolved from apes, what if another species have already evolved from humans but left the planet millions of years ago? If this is true, in the future, if humans are advanced enough to leave the planet, could apes then evolve into humans and start the process again? Surely this would only take a few million years from the date we all leave?

First of all let's clarify a misconception I perceive in your wording.

Humans did not evolve from apes. Humans and apes have a common ancestor! The exact moment of separation between the two is thought to have happened somewhere around 2 millions year ago, with the appearance of homo abilis 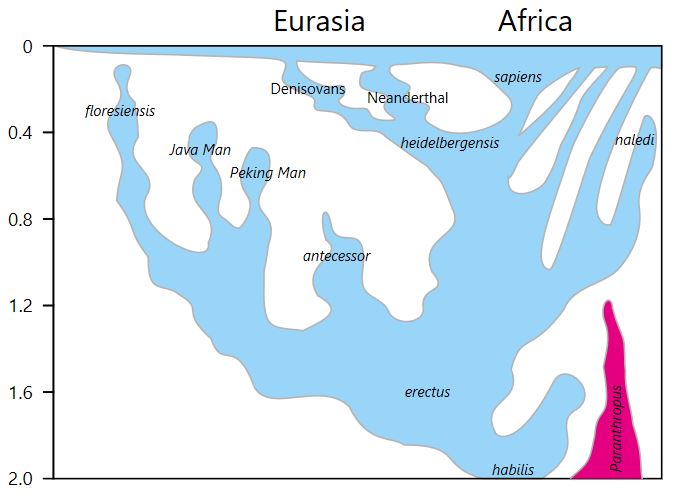 If there was a species capable of developing space travel, we would have observed its traces somewhere: depleted ore mines, leftovers, buildings are just few of the traces they could have left behind. We have been able to see copper mining during bronze age from the increase of arsenic content in the surrounding of the villages working the copper ore!

So, based on our observation, there was no species like us before us.

When we disappear from the planet, can another intelligent species arise? Very probably.

Can this species be alike to humans? Very unlikely. Each species is the results of billions of random mutations. It would be easier to win the lottery 100 times in a row than having two independent species be exactly alike.

Evidence of our existence is irrefutable and irreversible

Unfortunately, our very current-day presence would easily be detectable in the future. Even if we leave Earth, we dismantle cities somehow and let them grow over, the unfortunate thing is future archeologists will notice:

So, extending this to: can we detect an ancient lost civilisation?

The answer is yes, we would have found out already as we would notice the same traits in our past. As there is no evidence of a long lost civilisation, especially one with spacefaring capability, then the conclusion is that there hasn't been one.

Now, the only way around this is to somehow completely 'write over' the planet. Much like the 'Genesis Device' in Star Trek 2 - each atom on the planet is reconfigured to suit a previous age. Not saying it's impossible, but it may be possible for a civilisation several million years advanced.

It's possible...if said species was really good at cleaning up.

We haven't found any evidence of a lost civilization before humans, and we've found plenty of traces of humans. We've also found fossil fuels left over from very early on in the planet's lifecycle, and if another species like us had arisen, they would have depleted those stores. Evidence of intelligent species creates an obvious and irreversible mark on the planet.

Or at least, assuming that said intelligent species' technology never advances beyond where ours is today. And why should we make that assumption?

In an effort to combat climate change, modern scientists are already looking into ways of cleaning up the atmosphere. The thing is, we've basically burned millions of years worth of fossil fuels and turned it into gases. The only way to get those gases out of the atmosphere would be...to turn them back into solids, and put them back in the ground.

This would require an immense amount of energy. It would take more energy to un-burn fossil fuels than the energy we got by burning them, thanks to that pesky Second Law of Thermodynamics. But new advances in energy technology might get us access to this kind of energy - and once we do have this energy, cleaning up our mess would be a sensible thing to do with it, right?

Construction technology is also growing more modular and flexible. As civilization advances, we're looking for ways to quickly set up and dismantle buildings so that cities can be redesigned as the needs of the population changes. Who knows how far this will progress in the future? Once we can build hordes of constructor and deconstructor robots creating moving cities should be simple.

So let's say an ancient civilization arose, burned through fossil fuels, found a much better source of energy, and then fixed their own climate by putting those burned fossil fuels back into the ground. They assimilated their historical constructions and developed construction that could be easily dismantled using swarms of robots. At some point after this, they discovered space flight and left, leaving nothing behind.

Why leave nothing behind? Who knows? Maybe it's normal for advanced civilizations to want to leave their world in pristine condition, paving the way for new intelligent species that may come after them. Maybe as their technology developed, they finally discovered the well-hidden remains of the civilization that came before them, realized that they wouldn't have existed if the prior civilization hadn't cleaned up, and demonstrated their appreciation by copying their predecessors.

Maybe we'll do the same.

1
Is it possible that humans could ever evolve to handle the Sun's radiation without anything to protect us?
9
How would it be possible for a species to evolve naturally occurring halos?
25
5 million years in the future and Humans are still the same: how is that possible?
12
How to evolve a reptile into a wyvern, 100 million years in the future?
0
Is the evolution of my aliens realistic?
3
Plausibility of another extremely intelligent species evolving who finds the remains of our existence and emulates our society
8
If humans were transplanted to a different Earth-like world that they didn't evolve on, how would they deduce how they came about?