Could Volcanism Provide a Large “Heat Oasis” in a Polar Desert?

So there is an Antarctic like continent in my setting; and just like Antarctica it is the largest and most inhospitable desert in the planet due to how absolutely cold it is.

But what if there was a hotspot? Now it’s not just a single volcano with exposed lava like Mt Erebus in real life Antarctica, it’s more like Yellowstone, but even more active and extensive.

Thousands of significant geysers, hot springs, and even active volcanoes that are pouring lava like Kilauea are all present in this massive caldera region. Nearby glaciers are exposed to considerable heat, with a few having hotspots beneath them. This is causing much greater precipitation in the region compared to the rest of the interior, and of course some liquid water in places

Would enough heat production in a supremely dry and cold continent create an oasis of sorts? Or would it at least be a better place to live compared to the rest of the wasteland?

Note: The volcanism isn't so significant as to cause noticeable global warming, this is a question about a regional environment.

Bonus: Humans similar to the Inuit and Nenets live on the coast of this super Antarctica, would the volcanic region be a place that they could exploit with herds of reindeer and other arctic life, or would colonizing such a region only be feasible for people with advanced technology?

Your model can be Yellowstone itself. There are heat adapted plants which can live in the hot soil around geothermal features. It looks like these are all grasses but you could riff on that.

You do not generally see images of animals soaking in the hot springs in Yellowstone. Those get pretty hot, and plus it is freaking cold there so I worry about the "heated bird bath syndrome" - birds warm up in the heated birdbath and go perch in a bush and freeze solid. But Japanese macaques are famous for soaking in hot springs. 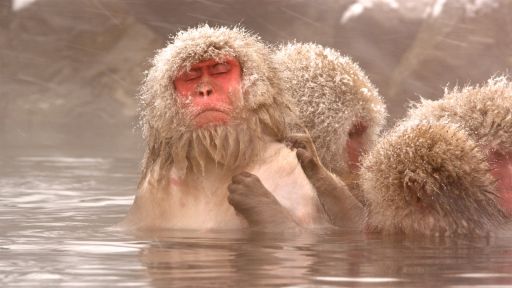 If that is what you want, you could have human lodges adjacent to the hot springs and they could run out and have a soak. If I am in your story I am going to look exactly like that monkey.

Not the answer you're looking for? Browse other questions tagged geology science-in-society volcanoes polar-region .

7
Hamada this place! Plausibility of hamada desert features in a polar region
15
Is it possible to have hot desert polar regions and an icy equator?
5
Antarctic Climate on Greenhouse Earth
22
Is this coral lagoon geologically possible?
21
What would it take for an island to sink and rise yearly and naturally
3
Does or could a collection of regions like this exist on Earth?
3
Consequences of hitting a Pluto-like planet with a highly luminiferous meteorite?
3
Could vulcanic activities make polar regions more inhabitable?
4
How big can a whirligig/planetcake get while still maintaining human-survivable gravity at its equator?