Here a laser raptor Pew Pew'ing in its natural habitat and timeline. 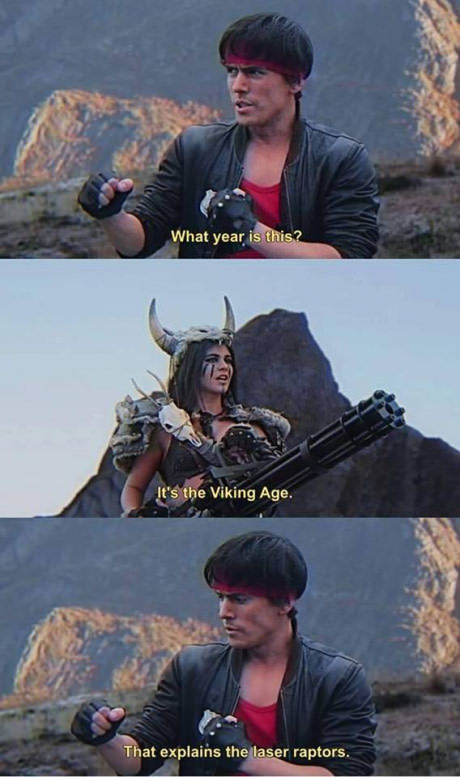 (From the Kung Fury movie)

So I want to know how a biological organism can develop to spew laser beams through their eyes. What kind of organs are needed to generate the laser, and are the natural adaptations required to achieve this?

The laser eyes's function is not like Cyclop's from the X-men, but more like laser beams from Superman's eyes where you can switch it off and on.

Preferably they would still have functional eyes to see normally, so no ecolocation, x-ray vision, etc

And as I mention the eyes should be biological and natural, so no genetic engineering or bionic technology involved.

It may surprise you to learn that is possible to generate coherent light using a biological medium as the material. Bioluminescence and reflective coating (for the inside of the cell) are at least part of the requirements, that I've been able to figure out.

This is very weak. The abstract of the paper I linked mentioned using the technique to image a cell by having it emit a laser. Any small amount objects, like proteins or organelles, will cause diffraction and absorb some energy.

And that leads into the real problem with using an eyes for a laser: It will cook itself. The laser emitter is going to generate waste heat. This is proportional to the energy of the beam. 30% efficiency is considered high for a laser. For every joule of power delivered to the target, at least two are going to dumped into the eye. And that's with pure materials, measured construction, and and ideal mechanism.

In addition, the efficiency of the laser is probably going to tank as it heats up and cooks itself, so that's another problem.

And while the eye isn't the worst shape for a laser (presuming you use the entire retina as the emitter) the problem is that with the small aperture you won't be able to focus the laser onto a small spot. To get around this, you could pump up the power, but your laser is made of the same stuff as the target. If it would burn human skin, the laser eye would probably be burning itself. Remember, 30% efficiency is high for a laser.

As far as actually seeing through this eye, it would be possible, but optical systems are reversible. The field of view would be incredibly "zoomed in" so this eye would only be useful for precisely aiming that laser. It would be like running around with a pair of telescopes glued to your eyes - no peripheral vision at all.

So, how will we make this work?

This eye is going to be massive. Like a satellite dish, almost. The bigger, the better. This makes it easier to get a small spot size on the target and means each bit of laser-retina needs to output less power. On the back, there will be some sort of cooling mechanism for the blood leaving the laser-eye. There may need to be circulation and cooling, and filtering of the interocular fluid as well. This is going to need a lot of blood flow and food to fire.

The rest of the body must be designed around this laser. Storage of energy in some form to quickly refuel the retina after each firing would be needed. You'd also need secondary eyes for peripheral vision as well, like how snipers work with spotters. Not to mention the actual physical support of this laser as well. If you think your neck gets sore holding up your head, imagine how bad it would be like this.

1
Is it feasible an organic laser (Superman´s heat vision)?

7
How do species with ability to project high energy beam from its eyes prevent overheating?
31
Can a biological laser exist?
8
Many eyes or fewer?
5
How could a dark-skinned race develop light eyes?
13
Laser Eyes: Practical?
18
Biological ''Helmet''
3
On what conditions would a four-eyed creature evolve to have six eyes?
5
Best place on an humanoid body to develop biological radio?
1
What organs or modifications are need for a biological creature to develop lethal force as a poop machine gun?
5
Evolved insect eyes