How would a well-equipped Renaissance knight mitigate a dragon's fire breath?

During the early Renaissance, how might a knight-errant equip themselves to mitigate the offensive capabilities of flying, fire-breathing reptiles?

It can be assumed that the knight, backed by a wealthy benefactor, would have the funds necessary to procure multiple sets of full plate armor. However, they might choose to spend this money on different equipment should such armor prove insufficient to the task (for example, one might invoke the imagery of a tin-wrapped baked-potato to illustrate the potential downfalls of metal armor).

It can also be assumed that dragons are a relatively well-known threat. Furthermore, the fire-breath of the dragon in this scenario is produced by combustible gases (rather than petroleum jelly or some napalm-like liquid you might find in a flamethrower), such that the flame is unlikely to "stick" to objects that do not immediately catch fire.

Against a dragon, metal armor would be a poor protection. Best bet for the knight would be avoiding dragon fire altogether and try to use ranged weapons and traps. However, the question specifically asks about fire protection, and there are a few things that Renaissance era technology can offer.

Asbestos had been known for a long time, and people could even make fabric out of it, though it had seen much use only in industrial era. It should be totally possible for a Renaissance era knight to have full body asbestos clothing, which should provide flexibility as well as some degree of protection from fire.

@maxisalamone's answer had suggested the use of large shield, and I would second that suggestion. Additional benefit of a shield is that it can be easily discarded.

No matter what kind of armor is used, the poor sod will just be cooked inside it when it comes down to battle. What you need is Game of Thrones scorpions (pictured below): 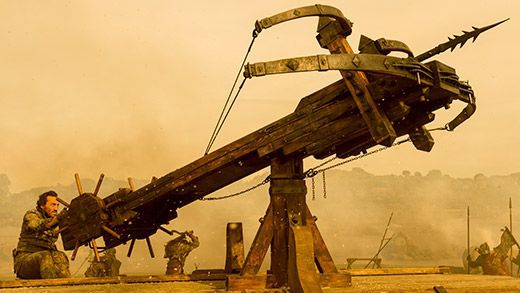 Dragons can't breath fire if they're dead (unless they are raised as zombies, but that's another problem).

An external layer made of metal plates, and a wooden interior layer for isolation.

Armor will simply be in the way, heatwise. But, on the other hand a dragon would have other means to attack besides fire. 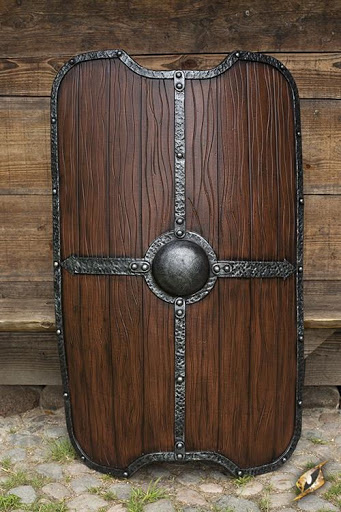 I think a design change to knight's armor is required.

If their armor was spaced -- having a gap between layers -- then the middle layers could be filled with cork or maybe clay (thermal insulators). The second to innermost layer would be damp -- capping the temperature of that layer at 100 C (as long as it stayed moist). This means the inner layer doesn't need to be much more than the potholder to keep the Knight safe.

The knight would have some sort of water tank on their back -- or saddles -- that would use the bouncy motion of the horse to keep water dripping into the second to the innermost layer.

The knight would also need an air supply -- because of just a like a flame thrower -- the dragon's breath would consume the oxygen in the air, leaving behind combustion products. This means that a knight that survived the flames could still suffocate until the smoke and etc cleared. It wouldn't need to be pressurized like a scuba tank. I think maybe a long hose would be good -- long enough to be out of the burning radius. But, that might be too resistive to breathe through. So a set of leather bladders -- fixed under the horse -- might give the knight enough air to charge in or run away. And the knight would take the air nozzle in his mouth and bite down to breathe in the air stored in the bladder. Only a few breathe would be needed since the goal is to keep the knight fighting while in the swirling fire or smoke. The knight would be attacking or fleeing at those times so he wouldn't be in the danger zone for all that long.

OP has stated this is a transitory passing of fire and flame, and not any napalm-like liquid or gel being stuck onto the knight. There's an answer for that.

Navies have been dealing with this for 100 years. The issue is that artillery propellants create very fiery but very, very short duration flame fronts. It's all over in less than 1 second, but it creates flash burns that wreck the skin and eyes, and put the gunners out of commission. That means that gun is silenced until medics can get the injured out and re-crew the gun with fresh sailors.

The Navy discovered this is not such a vexing problem. Sailors simply needed momentary protection from the flame front. So the answer was anti-flash gear, simply cloth soaked in borate fire retardent (and today, Nomex), along with some eye protection.

Of course, this knight will have to wait centuries for the Battle of Jutland, and by then the knight will be a doughboy. I'm not sure they have discovered borates in medieval times. But, the test is simple enough; soak cloth in a substance, let it dry, then wave the cloth through fire and see if it catches. I asert that alchemists, tasked with the job of treating woolen cloth to retard fire, will simply trial-and-error until they find something that performs reasonably well as anti-flash.

If nothing else, wetting the cloth would suffice, though would have to be kept wetted somehow.

One thing you will want to consider is that fire means hot air as well. Is it useful to have your skin safe only to have your lungs dry out and crisp when you are surrounded by super-heated air? This is something that annoy's me when I see people running around in closed areas with lots of lava in fiction stories. Well, dragon breath may create some of the same problems.

So the first thing to think about how long your dragon can deliver a gout of flame along with how big the flame is. If you have a fairly small gout of flame that only lasts a handful of seconds, you are ok. If the Dragon spews a huge gout of flame that is super-heating the air and it lasts for 30 seconds or more, your knights may have some issues no matter how good the armor is. One gulp of 1000 degree or more air is going to create some problems. If it doesn't crisp the rather fragile human lungs it could very well dry them out, which isn't good either.

I would suggest, as others, perhaps a jacket and breeches of an asbestos fabric over chain or leather armor. The helm could be interesting. Perhaps something like a diving helmet fed by a bellows with a squire hiding behind a rock.

Of course the best way to survive a battle is to not get too close, so an even better tactic is to ambush the big beastie and stay as far away as possible from the breath weapon. Heavy longbows, or better yet Ballistae. Set booby traps in the lair while it's out hunting. Poison. Things that will kill the dragon while it is a long way away from you.

Good luck taking a hit from a flamethrower; even if you have fireproof armor made of asbestos or have a tower shield you’re still going to be dealing with all the nasty side effects a burning liquid would. Asbestos won’t help against oxygen depletion, and a tower shield could very well have flame spill over it and still burn the knight.

It’s better to treat the dragon as a tank or attack aircraft, something the infantryman must avoid and outmaneuver in order to strike it with specialized equipment at range. Perhaps the knight could have a really powerful crossbow that he uses to shoot the dragon from a concealed position, or he rides a fast horse and shoots arrows, or even better since it is a Renaissance era Knight he could have a matchlock with grapeshot to use against it

Not the answer you're looking for? Browse other questions tagged dragons armors medieval-europe fire renaissance .

24
How much would licensed necromancy affect the economy of a (European) Renaissance society?
10
How would a medieval to renaissance age underwater craft (i.e Submarine) operate?
29
Can a dragon's fire breath be liquid based?
1
How could an organism with keratin fur/hair and feathers generate a spark of static electricity? How well would this spark start a fire?
13
How would medieval/Renaissance-era castles protect themselves from air raids?
7
How could a dragon develop blue fire breath?
3
How Would Limited Space Travel Change Late Medieval/Early Renaissance-era Warfare?
4
How potent would a dragon's fire be?
0
What would be the potency of my dragon's breath?