What evolutionary pressures could lead to tree dwelling octopuses?

I'm wondering what evolutionary pressures could lead to the rise of such creatures. 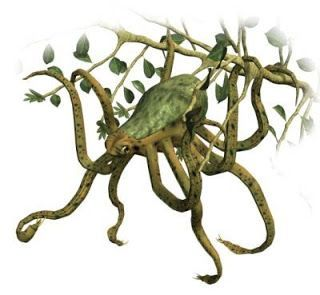 This particular mangrove swamp is part of the river delta of a huge river network (think amazon). The nutrient and particulate rich water is nirvana for various molluscs and bivalves.

Your octopoids (like many real world octopuses) eat molluscs, so this swamp is also nirvana for them. The salinity of the swamp can be fudged towards more or less salty to support the kind of creature you want.

Now, this swamp also contains some nasty predators. Pirhana analogues, or voracious otters, or eels. These predators would make short work of the octopoids, except for one small fact.

The octopoids can move well out of water too.

In tidal areas in our world octopuses often travel short distances across exposed rock to exploit trapped prey in tide pools. Your octopoids prey on molluscs on tidal flats where they can often eat without fear of predation.

At some point one or two of your octopoids also realised they could climb the mangrove roots. This gave them an advantage over their mud-dwelling cousins because they could prey on the deeper water molluscs and still have a viable escape route from the predators. Evolution took over and boom: low level tree climbing octopoids.

Now: laying eggs just above the waterline (so they get periodically soaked but spend a long time out of reach of predators) is a desired trait. Eggs that can spend longer out of the water are more likely to survive. The ability to lay eggs higher is a desirable trait in a sexual partner.

Octopoids now have to evolve thicker, more waterproof skins so they can spend longer out of water. These skins also come in handy (along with the throttling, entangling, very strong tentacles) for dealing with their new arboreal neighbours, none of whom are sufficiently equipped or ready to deal with the writhing tentacular doom machines that are now encroaching on their leafy paradise.

Octopoids that can spend long periods out of water and climb to the uppermost branches discover an alternative food source in fresh fruit, bird eggs and the corpses of asphyxiated monkeys. They start to outcompete their purely mollusc-bound brethren.

And your tree-dwelling octopoid is born.