Binary planets that are not tidally locked

The story takes place in Alpha Centauri, with this binary orbiting just over 1 AU from Rigil Kentaurus. The star system will tightly packed, but following the 10 Mutual Hill Radii separation setup. The primary planet in this pair will be 1.2 Earth masses and second planet will be 0.85 Earth masses. I understand that it is more common for binary pairs like this to form a tidal locking situation (such as Earth-Moon), but is it possible for these to orbit at around 800,000km and have their own spins/days.

Edit: both planets still orbit eachother within an acceptable range of their hill sphere with Rigil Kentaurus.

Bonus question, would it then be possible for one (or both) planet to have a natural satellite orbit it around half to a third of Moon's mass?

Wikipedia offers a formula (from a paid-for source, here) for estimating the time to tidal locking for two given planets. (See Tidal Locking Timescale.)

Masses in kilograms and distances in meters.

The formula assumes an initial 12-hour rotation period. (However, a more cumbersome formula exists on the linked page for calculating tidal lock time for different rates of rotation. 12 hours seems like a reasonable value, however, primordial Earth probably had a rotational period of about 6 hours, so there's room to push things.)

Plugging the values you've given for masses and orbital distance, we can estimate: 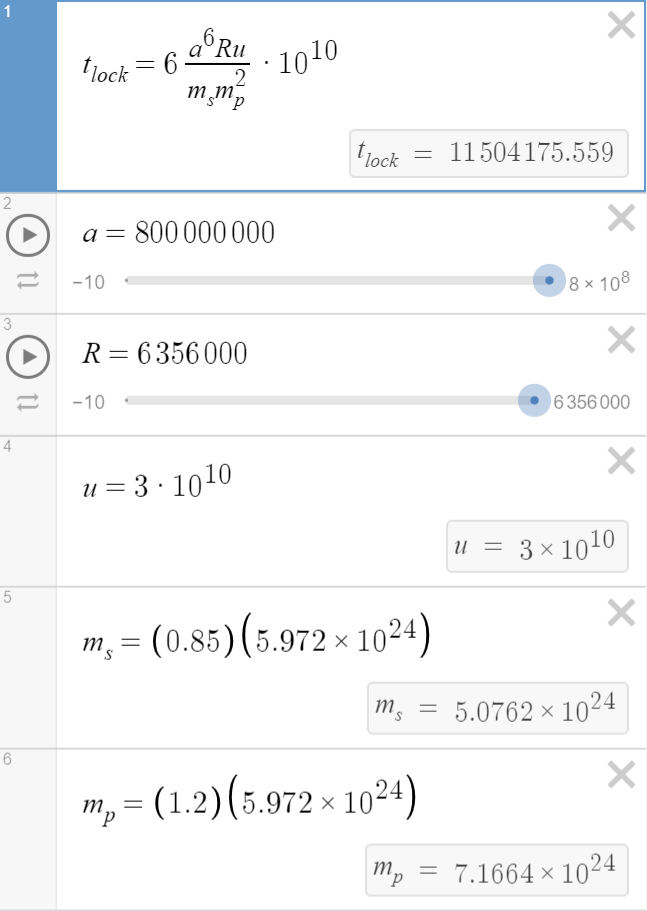 ... that the double planet will tidally-lock perhaps 12 million years after formation. (The planet loses on average 0.0036 seconds of its day per year.) There are many factors that can contribute to error in the formulas. Wikipedia states that in some cases, they may be off by orders of magnitude.

It's important to note that larger satellites tidally lock themselves faster than smaller ones. Mass $m_{s}$ grows with the cube of radius, and so does the mutual attraction.

A possible example of this is in the Saturn system, where Hyperion is not tidally locked, whereas the larger Iapetus, which orbits at a greater distance, is.

40
Habitable moon of a gas giant: working out the sizes and distances
4
Could a binary planet system have two non-tidally-locked Earth-like planets?
2
Would the following hypothetical planets in the 61 Cygni binary star system have stable orbits?
2
The major effects on the habitability of exomoons orbiting this Brown Dwarf
3
How long to become a habitable planet
0
Are Orbital Rings feasible to construct in another star system?
6
Binary Star System Build - Alpha Centauri
4
Could co-orbital planets also be double planets?
4
Air trapping polar vortexes on tidally locked planets?
7
Verifying Habitability/ Feasibility of my Conworld