A Vietnam-war era flamethrower vs an intelligent swarm of roaches? [closed]

I’ve heard that roaches were pretty resilient, so resilient that they could survive a nuclear apocalypse. In my world, these hyper intelligent roaches act like a sort of “hivemind” species with up to a 100,000 roaches per colony. One disadvantage of this, is that they cannot go more than a few centimeters from the nearest roach lest they be disconnected from their hivemind.

Now, the opponent is a man with training in the usage of flamethrowers. The flamethrower uses napalm and has a maximum range of 20 meters.

In one scenario they do battle in an open field and in the other, they battle within a rural town.

If the roaches touch the man, they’ll enter through body openings and destroy him from the inside. A bit gross but this was all I could think of.

Given a 100,000 disease ridden, hyper intelligent roach swarm, could this man survive or even win this?

One man? Definitely not. A few? More likely, but still improbable.

The largest issue you would face is the nozzle spray size of the flamethrower. Vietnam era napalm flamethrowers were largely designed to get as much range as possible, making it effectively similar to a flaming squirt gun. While this is useful against less mobile humans, not so much for flying swarms as the spray area isn't very large. When shooting at a swarm in full flight, you would definitely hit a fair few, but the rest would just evade by flying to any side but down. When possessing a hive mind, this becomes significantly easier as well.

This could be offset by increasing the nozzle spray to something more like a garden hose. This would effectively create a wall of flame rather than a stream, which would be significantly more effective against a swarm. Especially if not as much power is needed to damage them, a little flame goes a long way against a creature that small. They might be resilient, but they can still be cooked.

The only unsolvable issue with a napalm flamethrower is this: You cannot shoot up. It doesn't burn efficiently enough, and residual flaming napalm would come back down, so if you shoot up, you will simply douse yourself in your own flame. And a swarm can fly, all they need to do is get overhead and descend upon you. If you barricade yourself in a room while spraying the entrance, you could defend yourself. But which hive mind would voluntarily run themselves to death in a sea of flames when they don't have to?

There is one significant advantage using a flamethrower could have against the roaches if the battle is drawn out: Smoke. This could disorient the roaches, and make them bump into each other making them vulnerable and less mobile. I this has been proven to work on bees and mosquitoes, but I don't know how effective it would be against a swarm of roaches.

Yes he could, cockroaches aren't immune to fire.

Surviving the nuclear apocalypse has to do with not dying from radiation exposure. The actual blast and heat kill them no issue. They are also incredibly adaptive with regards to poison, which is what is typically used since it doesn't damage buildings.

How intelligent a hyperintelligent cockroach hivemind is, largely determines the outcome. If they can get close, they win, the guy doesn't have any real short-range defense with his flamethrower that doesn't equally hurt or kill him.

The flamethrower is useful, but his key to survival is protection. A robust hazmat suit or similar will help him survive long enough to take out enough roaches to damage the hivemind. He also needs a tactic for what do when they swarm over him - jumping into water would be good, but what would be ideal would be a fireproof suit.

Flamethrowers are spectacular visually, which is why they feature in many movies, but their true effect is to consume all the oxygen in an enclosed structure like a bunker, killing the occupants through a combination of suffocation, heat and smoke inhalation. Generally speaking, engineers were tasked to use flamethrowers. 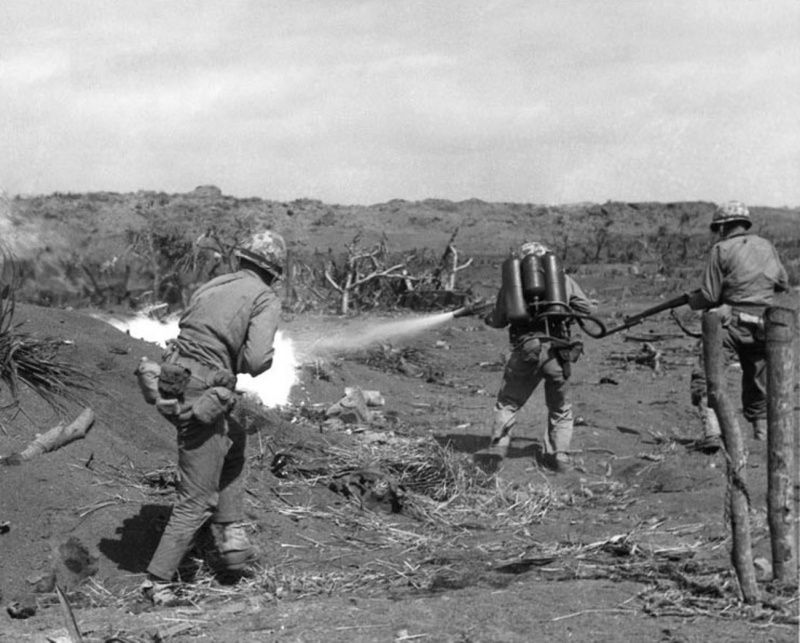 Flamethrower in use on Iwo Jima

If the human is smart enough to prepare the battlespace and find a way to lure the roaches into an enclosed structure with limited access points, then the flamethrower will have a considerable impact. The roaches exposed to the flame will be burned, and the remainder will be suffocated as the oxygen is consumed. The flamethrower operator will need to be outside with access to clean air and downwind of any combustion products. If he is clever, the enclosed space might be seeded with accelerant (i.e. cans of gasoline) or even improvised explosives (such as aerosol cans which will explode under the heat) or real explosive munitions which will detonate when the fire reaches them. Collapsing the structure will provide a permanent solution to the roach problem.

Out in the open, flame throwers won't help much. If the roaches are confined to the ground, a wall of fire and smoke from burning vegetation might stop them from advancing, but only the few in the front ranks will be burned.

Just to put this in perspective, a classic Western flamethrower from WWI to their general disappearance from the battlefield in the 1970's was pretty heavy and difficult to manouevre, and used a tank of highly pressurized nitrogen to project the burning fuel. The Soviet era LPO-50 used essentially giant blank cartridges in each fuel tank to pressurize it, and had a range of up to 70m. Modern flame weapons are generally rockets with thermobaric warheads, that provide a much hotter and more intense flame at the point of detonation, and can be counted on to not only consume all the oxygen, but ignite anything flammable over a considerable distance as well.

Not the answer you're looking for? Browse other questions tagged biology weapons hive or ask your own question.