How bright and lit up could cities be in the future?

Technology will obviously make lamps much brighter and with wholly new designs and functions like self-illuminating walls, surfaces and glowing objects. Genetic engineering could also create trees and other plants that glows in the night using biofluorescence. Fluorescent materials could also be used for lighting and entire buildings and floors could be built using these materials.

Giant OLED panels and other similar technology could make cities even more lit up. If you add the brightness of the printed paper and giant screens in cities with glowing trees, fluorescent materials and advanced lamps big cities could literally appear to be a vertical, giant nightclub in the future with strong skyglows that would make the sky colorful at night but obviously not as bright as daylight. 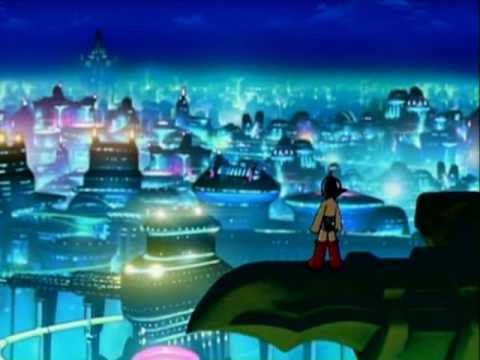 The picture above is Metro City from the Anime AstroBoy at night. Very well lit up no?

Yes, this is very much possible. However, at the same time unlikely at the scale you point out.

First of all, as pointed out by L.Dutch, an overload of harsh bright light is increasingly uncomfortable and has massively diminishing returns. While it is technically possible to illuminate a city to daylight, it is simply not necessary to do so, and apart from lit up advertising it is unlikely unnecessarily excessive amounts of lighting will be installed.

Secondly, only busy areas need to be illuminated. Think city centres with night shops, clubs, restaurants etc. However for a large city, those areas are often concentrated into hubs. These areas will be lit more, while people will prefer other areas darker. It is unlikely an entire city block will be illuminated for one food truck. Consider that people will prefer to sleep at night, even in a 24/7 culture. When suburban areas are overly lit, complaints will increase, while the usefulness of such lighting is debatable to begin with. Overly lit high-rises for example are unlikely to make you popular.

Thirdly, costs. While energy consumption by lighting might decrease in the future, the variety and scale of lighting you point out will get increasingly more expensive to install and maintain. It is unlikely a large city will fund large amounts of unnecessary lighting. For example in your picture most buildings have a large illuminated strip around them. These are utterly unnecessary as they do not illuminate anything. This is not a trafficked or pedestrian area, and are unlikely to be strong enough to help illuminate such areas, and if they are, these are utterly inefficient.

Lastly, colour. There have been increasing calls from various environmental groups to reduce the amount of artificial lights for exactly the reasons you state. Therefore the current idea is for most artificial lighting to be changed to a green colour. This is the colour humans best perceive in their visible spectrum, and therefore increasingly efficient in illuminating areas while needing less light and energy. Green light is also believed to be less disruptive to wildlife and natural rhythms. If this movement takes off, then the amount of lighting might actually decrease in the future, while visibility might increase.

Possible to do, yet unlikely to happen.

Cities could be incredibly bright, but seeing how people are more and more erring towards conserving energy, thus having as little waste as possible. Lighting up a city like a Christmas tree is unlikely to happen. As mentioned, there are some places that are illuminated brightly like Times Square or Las Vegas. Those places will likely remain exceptions to the rule.

So even though lighting up a city is very feasible, albeit expensive, it's unlikely to happen at large scales. The effects you describe are called light pollution and serious efforts are being made to reduce this as much as possible.

Lastly, the final nail in the coffin might be serious adverse health effects, both mentally as well as physically as the result of Over-illumination

Our eyes are tuned to a maximum luminosity comparable with that of the sun at noon in a clear day. And already many people prefer to wear sunglasses in those conditions.

It's therefore logic to assume that no city would become brighter than that at night, because more than that would become increasingly uncomfortable.

iMHO opinion future cities will tend more and more to be built and rebuilt as gigantic single multistory buildings, with corridors taking the place of streets. These cities will be more and more closed cycle ecology with intensive recycling of everything, like moon bases and space habitats. Thus all of their lighting will be interior lighting, and will be set at comfortable levels for indoor lighting.

In such a city the only use for outdoor lighting would be to make certain aircraft seen the cities and don't run into them.

So when people go out of those giant city buildings at night, the areas around the cities will not have much light or light pollution, and it should be easy to see the stars.

How bright? In my personal opinion, illumination level will top out between 10 lux (twilight) and 100 lux (very dark day). In places where light pollution is a recognized concern, these levels will be lower.

Existing street lighting on busy roads already puts us within this ballpark. Some areas (shopping, entertainment) will be lit brighter, but those areas would represent only a fraction of a city.

Why? Because most people sleep at night, and they prefer the night to be dark. At high latitudes in the summer the nights are bright, and this, at first, is very exciting. After excitement wears off, people realize that they need to sleep in the dark, and, for biological comfort, they also need a dimming period of twilight in the evening.

Thus, at least in residential areas, people would prefer to keep the lights low. Perhaps a bit brighter than it is today, but still low.

Not the answer you're looking for? Browse other questions tagged technology science-fiction cities light urban-fantasy or ask your own question.

11
Cities in the trees
11
How would antigravity change the design of cities and buildings?
3
Could Mobile cities exist?
5
Could people live indefinitely in underground cities?
5
A double-bright Moon and plant growth
4
How can the interior of temple lit automatically during medieval time?
6
How bright were medieval cities at night, seen from the sky?