Sensors for a clockwork/fluidic robot?

So, mechanical computers are a thing, as are pneumatic and hydraulic actuators.

Combining those ideas, it's not that hard to design simple purely-pneumatic/hydraulic robots--provide them with a source of compressed fluid, and they just go (and that includes performing middling-complex mechanical calculations, e.g. to coordinate the motions of hexapod legs entirely via fluidic switching--not just, say, powering a turbine to spin wheels).

Building more complex control "circuits" to make a fluidic robot do more than justy move straight forward is obviously possible, with the proviso that they are likely to be much larger than electronically-controlled robots, since miniaturizing fluidic and mechanical components is difficult. But that's not very useful unless the control system actually has some input to act on.

So: what kinds of sensors would be feasible for a purely mechanical/fluidic robot, which can feed directly into a mechanical computer via mechanical or fluid linkages without any intermediate electrical stage?

"Handbook of Fluidic Sensors" provides a list of fluidic sensors that were commercially available and their capabilities.

Sound. For fluidics, you can more or less directly sense fluid flow and sound. All you need for a microphone is an acoustic horn to collect the sound. Fluidic circuits based on jet deflection amplifiers basically work off of acoustic signals. Although with traditional fluidic circuits it's difficult to operate at ultrasonic frequencies. Some fluid jets display sensitivity to ultrasound and ultrasound operated fluid switches have been developed. It's been proposed that such devices could be used to make ultrasound remotely controlled toys. Although the performance of this type of ultrasound fluidic switch is a bit dubious for this application in practice.

Proximity/Distance Although it's difficult to operate at ultrasonic frequencies with fluidics, fluidic proximity sensors based on using ultrasound to transition a jet of fluid to turbulent have been employed commercially. See page 109 of the handbook for more details. 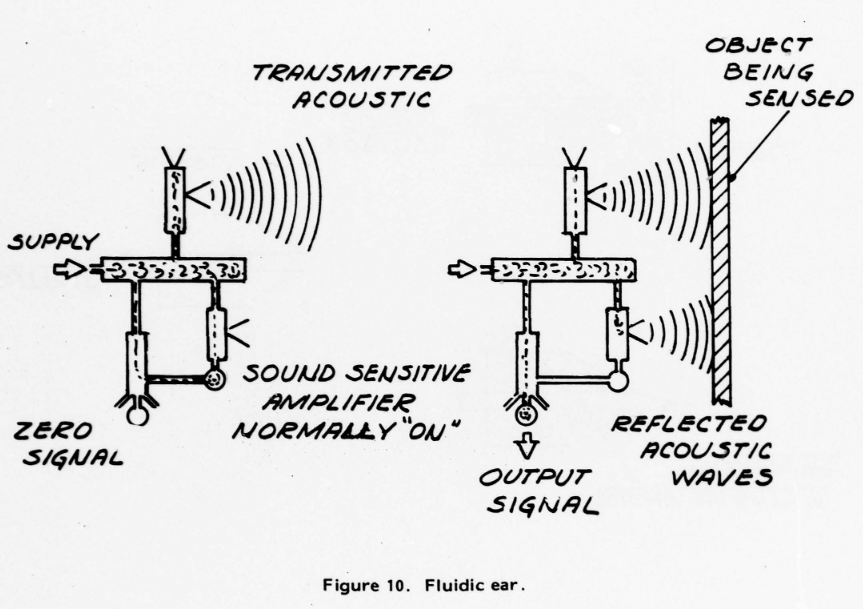 Although the above sensor provides only a boolean response. There are also fluidic devices which can modulate and demodulate ultrasound, meaning you could potentially make a workable sonar range finder despite not having switching elements which work at ultrasonic frequencies. Although this has never been done before and one might have to push the boundaries of what's possible with fluidics to do this. It might become more practical if we run fluidic devices off of low density gases like hydrogen and helium, which have higher speeds of sound and can thus enable higher operating frequencies. You can also measure short distances by measuring back flow from a jet and other fluid dynamic effects, see page 19 and 57 from the handbook above.

Touch Sensors/limit switches One way to make a simple touch touch sensor is make something that opens a valve or hole when bumped. There are numerous examples of this in the handbook above. Another way is to have an open hole which we blow air out of with a another channel leading back to the circuitry we want to drive. When the holes open, the output is zero, when the hole's covered, the air gets redirected to the channel. This type of device is typically called a back pressure switch and is shown below. 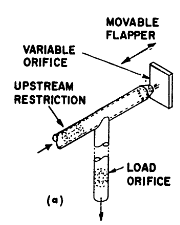 This same technique can be used to measure short distance too by looking at the back pressure.

Rotation Encoders One can make a simple analog of an optical encoder by using a jet of fluid instead of a beam of light. One can also use a channel that changes width so that the fluidic resistance changes with rotation, enabling analog absolute encoders to be made

Strain Gauges/force sensors One way strain gauges have been made is to have a pipe with a helical channel in it, sort of like a spring, and put rubber tubing in the channel. Compressing the pipe compresses the tubing and increases the resistance to fluid flow

Chemical Composition fluid viscosity, density, and speed of sound can also change with composition. A simple example of this is that we can sense the amount of helium/hydrogen in the air with an oscillator. The higher the pitch is, the more helium/hydrogen there is in the air. Fluidics has also been used to make a non-electric gas chromatograph

Accelerometers/Gyroscopes Purely fluidic gyroscopes have been made. Rotation can cause a fluid to swirl and form a vortex increasing fluidic resistance. 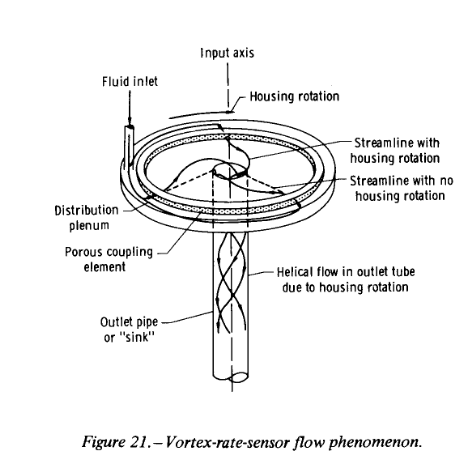 These have been used in an aircraft autopilot and have also been used to stabilize missiles and rockets. One can also take advantage of the fact that a jet of fluid will deflect due to rotation or acceleration(see page 7). These have been used to make fluidic tank gun stabilization systems. It's also interesting to note that the first in car navigation system was based around this principle, although the jet was sensed electrically through hot wire anemometers

Light Light's the most difficult thing to sense. In general it's difficult to transduce light to mechanical signals as the energy light carries tends to be low. Unless of course the light is bright. Fluidic sun sensors have been made, where we use a lens to focus sunlight on two curvy pipes painted black. Because fluid decreases in viscosity with temperature, we can look at the difference in resistance between the two pipes to figure out where the sun is. A one axis fluidic attitude control system capable of tracking the sun intended for a solar probe was demonstrated using this approach. A similiar approach has been proposed for making IR seeking railgun launched projectiles.(Fluidics can withstand the enormous EMP) Another means light can be sensed is using the photoacoustic effect. If the light is flashing on and off very fast, it will cause a cavity of air to expand and contract making sound. While this sound may be very minute, we can use fluidic amplifiers to amplify it into something we can work with. The non-electric gas chromatograph mentioned above was able to amplify the photoacoustic signal from a 1 mW led into a pneumatic control signal. Continuing the trend of absolutely bonkers applications of fluidics for the SDI, a fluidic ICBM interceptor control system was demonstrated that used a laser to control divert jets. One proposed means of sensing light with fluidics of doubtful practicality, but potentially higher sensitivity than the thermal approaches used above is to use a chemical reaction that is triggered photochemically. For example, we have a continuous stream of hydrogen and chlorine directed into a chamber upon exposure to sufficiently bright UV or blue light, the hydrogen and chlorine will react explosively. We can then sense the pressure and flow of the explosion. Perhaps a strip of light sensitive explosive could be used. In short, it will be difficult to sense anything except bright light.

Touch, hearing, balance, and vision if you have the chemistry.

For hearing, we already use a mostly fluid system. A vibrating membrane translates vibrating air to fluid, which then vibrate hairs. If those hairs are attached to micro-pneumatics (instead of electro-chemical receptors), they could transfer the signal to the pneumatic CPU (brain).

Balance works pretty similar, with fluid sending signals when it triggers certain points by being tipped in the inner ear.

Touch could work by having flexible outer layer of "skin" (rubber, plastic, whatever). It pushes on an array of ten thousand tiny pistons, which send pressure signals down the fluid channels to the CPU.

Vision is real tricky. But in human eyes, a photon actually changes the shape of a molecule in a rod or cone at the back of the eye, like a tiny a gear turning inside it. Perhaps you could use a chemical that expands or contracts to a large enough extent when exposed to light to effect the fluid channels. I admit this last one surpasses my chemical knowledge.

The technology to make these sensors is used today and used in everyday consumer goods from inkjet printers to cells phones. 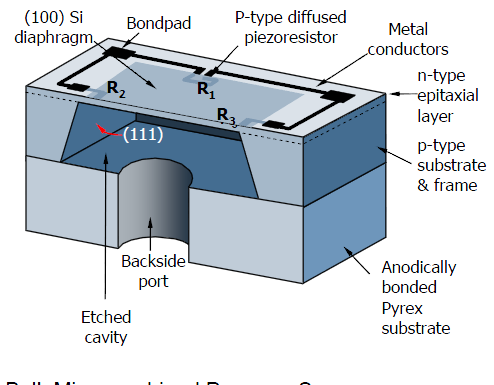 They can easily measure temperature, pressure, fluid flows, detect bubbles in hydraulic fluid detection by creatively exploiting observable parameters of fluid dynamics using MEMS capacitance and resistive meters in combination with very standard analog to digital converters and a little math. These signals can be converted back to analog levels using standard digital to analog converters, which could then be turned to pressure levels or pressure oscillations using electromechanical transducers.

If a completely mechanical sensor is required, then basic MEMS design will still work and just the sampling mechanism will need to be altered. For instance, in the MEMS pressure sensor shown below. The diaphragm will need to be connected to a mechanical pushrod whose motion is amplified by standard means using combinations of levers or gearing. The sensors will be no larger than a grain of rice, but the mechanical signaling mechanism will be larger.

On advantage of MEMS-based solutions is that Silicon, on this scale, of a few microns, is stronger than steel, so the sensors are very robust.

The size of the mechanical amplifiers will be determined by the amount of amplification required and available materials.

Not the answer you're looking for? Browse other questions tagged science-based robots steampunk or ask your own question.

7
Can clockwork robots have any sensory apparatus other than touch/contact/pressure?
3
Detection systems and trigger mechanism in a pre-electronic world?

11
Clockwork vehicles
5
Is a steampunk style Clockwork robot possible?
6
Best way for a robot to drink?
5
What’s a logical reason to give a war robot emotions?
8
How fast could a humanoid robot run?
0
How plausible does the power source for this fictional giant robot sound?
4
Writing a timeline for the robot apocalypse
12
How does a robot distinguish different metals and materials for self repair?
8
What’s the best design for a mobile medical robot?