What modern materials would be useful for a steel plate armor?

I'm not talking about better steel or adding cameras or bullets, but modern materials to improve some of the armor's weak points. In my world alchemists have improved their magic to the point they can create complex alloys at industrial rates, so I wonder if some modern materials can improve armors. 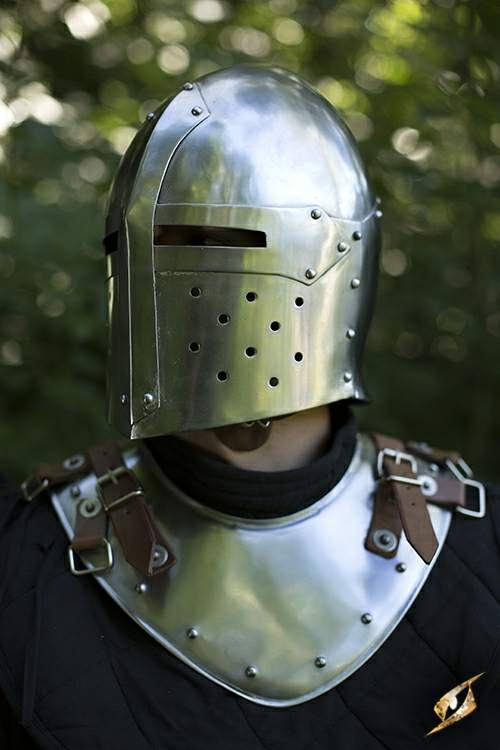 Would polycarbonate be useful to protect eyes from a thrusting sword for example? What would be the disadvantage?

What about heat? Is it possible to attach some thermal insulators to avoid overheating?

Shock absorption against blunt weapons, can you add some material underneath the helmet to reduce the kinetic impact of a warhammer for example?

An ideal kinetic armor — one that protects against physical attacks — needs several properties that often run in opposition to each other:

These are the advantages of both steel and kevlar. Both are highly resistant to shearing/penetration (kevlar more than steel); both are able to distribute the force of a blow over a large area (steel more than kevlar). Steel is more elastic, needing a fairly hefty blow to deform its shape; kevlar deforms easily, but absorbs more penetrative energy from plastic deformation, and so must be discarded after a few impacts. Of course, we have to consider the kind of attacks that are being made — kevlar is a wonder for stopping bullets, and would probably keep a battle axe from cutting deep, but would be of little use against a mace or a club — but in general there are always material improvements that can be made.

Gustavo's idea of transparent aluminum (aluminium oxynitride, a kind of ceramic) is an interesting choice, and would be a good protection for eyes where transparency is key, but I don't know its elasticity or tensile strength. Some transparent polycarbonates or transparent ceramics might also serve, though ceramics (as a rule) are brittle, which is not something one wants near the eyes. Ceramic plates would be an excellent substitute for steel generally — these are used in many modern armored vests — on the caveat that they absorb energy by crumbling (like crumple zones on a car) and have to be replaced fairly frequently. On the other hand there is titanium, which is as strong and shear resistant as steel, while having a weight equivalent to aluminum (maybe 4/10ths that of steel. Titanium is comparatively rare and difficult to extract, but that might not be an issue for magical compositions.

With respect to heat... Metals are (generally) good heat conductors — for good or bad — while ceramics tend to be heat insulators. However, body heat regulation is mostly a factor of airflow. For example, researchers have found that desert nomads do better with black robes the white: the heat absorbed by black robes creates convection cells in the air under the robe that tends to cool off skin through perspiration. The more layers packed under the armor, the more that air flow is inhibited, and the greater the tendency for overheating. Better would be a light, breathable material that allows airflow and keeps the armor from contacting the skin directly.

Not the answer you're looking for? Browse other questions tagged magic modern-age armors .

28
Would steel armor with gems embedded within its design be weaker than regular steel armor?
12
Modern Body Armor for Medieval Style Weapons
4
Can graphene claws cut through steel armor
7
What Limitations or Modifications Would Medieval Armor or Weapons Have if Modern Quality Steel Were Used?
6
Would modern body armor be much more useful for creatures that only cared to protect their heart
2
New Age Armor Materials
1
Could a steel cylinder punch through plate armor?
3
Powered armor that enhances speed. How useful would it be?
7
Would composite armor based on diamonds be useful against firearms?