How to hide a spaceship visiting Earth?

So, me and the boys have decided to take a trip down to Earth for reasons that matter not be it science, leisure or fleeing persecution. It is no concern how we blend in but our spacecraft poses an issue.

How can we enter Earth's atmosphere without drawing attention to ourselves and then land?

Also, I would like to make it clear my question differs from this one as this question is about entering a planet specifically Earth and not about space travel, and also preferably no sci-fi invisibility.

The spacecraft in question, primarily uses Ion Thrusters although it would be permissible to have some additional propulsion method for planetary entry, the craft needs to carry six human sized passengers and the main propulsion is used for long distance journeys and as such the craft is not the most manoeuvrable using its main propulsion.

Without much manoeuvrability due to only having the main thrusters available, it would be hard to gain entry into earths atmosphere at a low-detection spot. Even then, it would be hard to not be spotted at all, since earth has meteorite detection satellites and radars trained at the sky at all times. With the effectiveness being debatable, still as an extraterrestrial you shouldn't count too much on being the exception. You could however, disguise yourself as a regular meteorite that is not noteworthy enough. A few things to consider:

Entry point
Where you enter the atmosphere is hugely important. This should be done either in Antarctica or over a large ocean to avoid being spotted. Preferably at day, as the heat diffusion from entry into the atmosphere for a craft that size will give a sizeable light show visible for miles at night. Having a meteorite land in the ocean will make it less attractive for humans to investigate as well.

Heat protection
As above, the heat generated from entry into the atmosphere is problematic. Considering the size of your aircraft is kept to a minimum and you can get away with a craft roughly the size of a commercial passenger plane (depending on how compact your tech is, and how much cargo you need for interstellar travel), you wouldn't be considered a problematic meteor (I'm thinking Boeing 747 sized). Especially over the ocean, this doesn't warrant action by humans as most of your "meteor" would burn up in the atmosphere, and the leftovers would be considered broken up and fairly harmless when landing in water. With adequate heat protection of course, your spaceship would survive atmospheric entry.

Entry route
To disguise yourself effectively as a meteor, you would need to keep movement to an absolute minimum. As a meteor is a rock without any propulsion systems, they would not be expected to change trajectory at all. You would need to get the correct entry angle from hundreds of thousands of miles away (from when you are most likely detected by earth), and keep this steady all the way through entry. Only after entry you would be able to move, as you would be out of range of detection.

After entry
There is still a chance of being seen by humans, be it fishing boats, military, or anyone just happening to be there. Even though you would probably fall quite quickly into the "UFO" category and stories would be taken with a grain of salt, it would be best to avoid visibility as much as possible. If your spaceship can take it, consider moving underwater. If not, very low and slow movement concealing yourself as a speedboat or yacht of sorts could potentially work. Avoid high (out of sight) flying movement, because any country's missile detection system could pick you up and would be sure to investigate the potential threat, if not straight up shoot you out of the sky.

Landing
Depending on what your intentions are, you might want to land as far away from humans as possible, or close to civilisation. This hinges on whether the spaceship is your only mode of transport, or more (inconspicuous) planet-side travel equipment is available. With there being more than enough hiding places anywhere on the world, you would be unlikely to be detected on this point. If you are sufficiently capable at avoiding being seen, you shouldn't struggle much here.

Now, you should start being worried about how you are going to leave.

Enter the solar system on the opposite side of the sun from Earth. Come around the sun and approach Earth on the day-time side. You’ll be extremely hard to see with the sun behind you, and it’ll cover any flare from your breaking engines.

Hang out around Venus’s orbit for a while until you see a really good solar flare head in Earth’s direction. Fire up your engines and join the flare. I assume your ship is well shielded. As you approach Earth, use a microwave laser or similar device to take out lots of satellites. Humans will think it’s the fault of the giant solar flare that you’re surfing. Do not discriminate on only the satellites with cameras or humans will get suspicious. When you’ve cleared a big enough hole in the network, fall on to Earth, aiming for a patch of empty ocean. Splash down, convert your spaceship into a water craft and sail into a port. Remember to disguise your tentacles and retract your eyestalks!

You disguise your spaceship as a Challenger 300 aircraft. 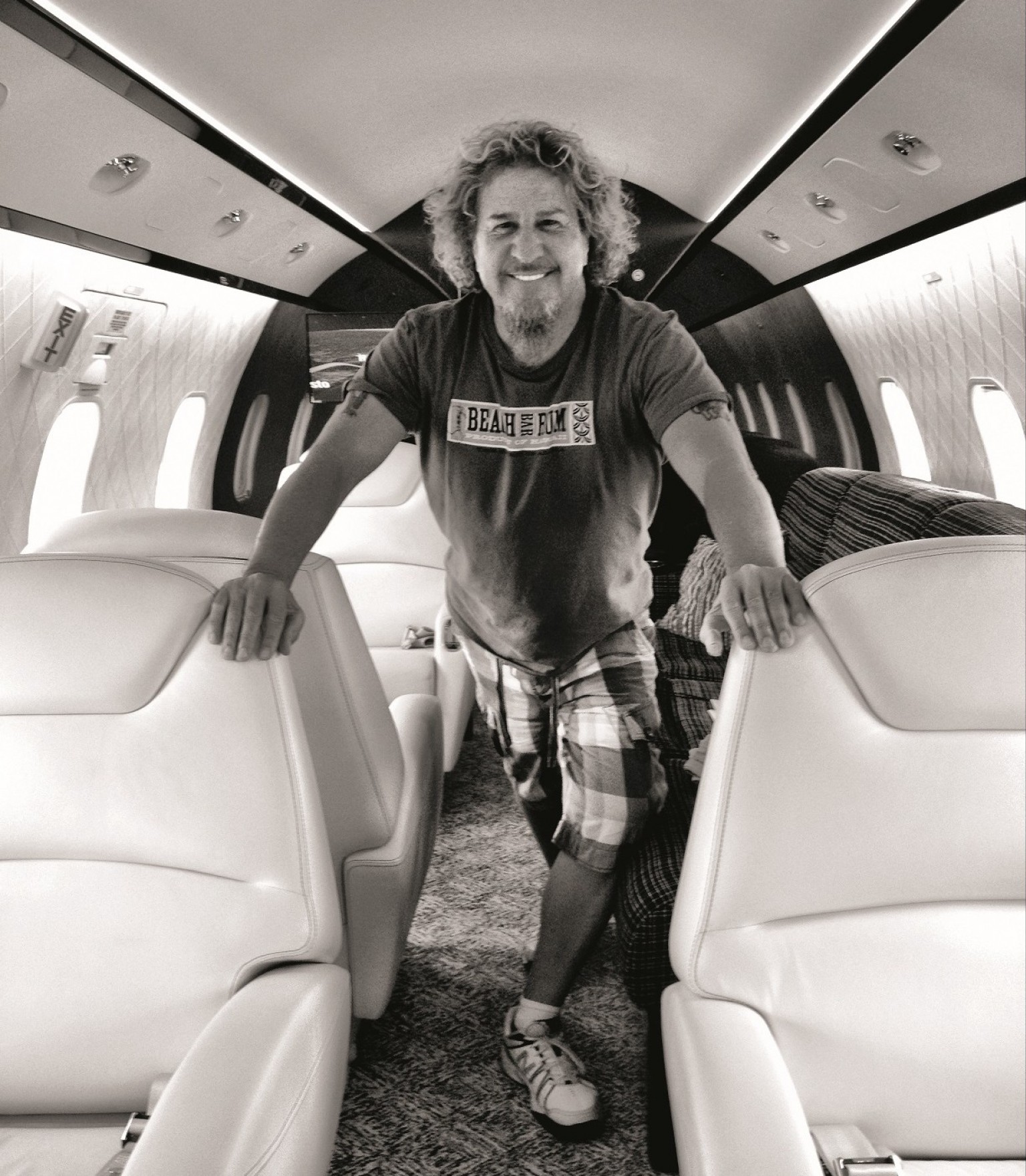 And disguise yourself as businessman, philanthropist, and rock legend Sammy Hagar. You will hide in brazenly awesome plain sight. Your crew will be disguised as his entourage. You can apologize for the confusion as you enter airspace but will be permitted to land once they realize who you are. If they ask how you were flying at such high altitudes you can laugh and say "Are you sure?" Prepare to sign autographs.

1) Cover the ship in ventablack. That will render it effectively invisible for earth technology all the trip down to orbit.

Not the answer you're looking for? Browse other questions tagged science-based spaceships transportation or ask your own question.

28
Is there any way to truly hide a spaceship?
24
Would Vantablack hide planes from radar?

28
Is there any way to truly hide a spaceship?
2
Effects of visiting other planets
14
Realistic spaceships: How to design a transport spaceship?
3
Landing a spaceship
4
Self-sealing spaceship
9
Spaceship Emission Security
2
How does the atmosphere of this spaceship work if my brain doesn't?
19
Would it be possible to hide a spaceship for 30 000 years in a cave on Earth?
3
How close could a small spaceship (or group of ships) get to Earth before being noticed?