How would the weather and organisms and flora be affected on an Earth-like planet with floating continents? 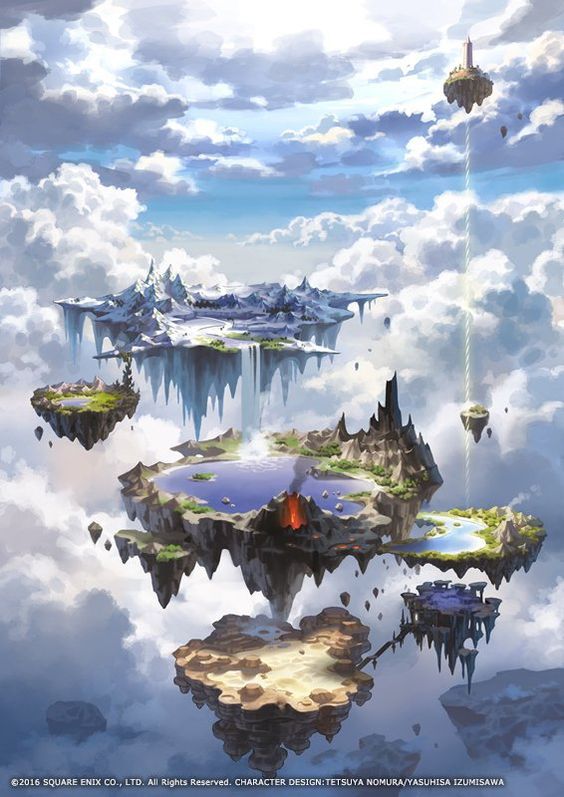 I am currently writing a script for my graphic novel. My novel is in the fantasy genre and I use energy-based hard magic (that is energy-based magic that has its sort of "science" and rules). So I don't need my world to be 100% scientifically accurate in its functions, but enough for it to be believable to the reader. My world also utilizes retro-futuristic technologies.

The earth-like world in my story is unique in that the continents have been separated from the earth by god-like beings ordained with power from the world's creator to protect the world from a destructive evil trapped in the earth's core.

How would I make an Earth-like planet with aerial continents believable and in what ways would this affect the weather, people, flora, and fauna of the continents?

The floating landmasses are hypothetically close enough to the world below to retain normal atmospheric activity but high enough to be protected from the infected land below.

For additional information, my continents went aerial about 1000 years before my story begins. Also, my continents are powered with energy cores made up of intelligent magical magnetic energy. Also, the continents vary in size and proportions, but some are big enough to hold up to two or three well-populated cultures. More advanced civilizations in my story also harvest recourses from the earth's surface through mechanical processes.

I am not a very science-minded person, so any help would be deeply appreciated.

First off, this is a very cool concept! Your question is fairly broad, so I was going to answer a few different ways.

Society - just like how oceans and mountains separate societies and cultures in our world, the separate floating continents would likely give rise to different cultures. This would extend to their belief systems (do they all know/believe the gods raised the continents or do they each develop different beliefs about how/why floating lands exist? What legends have they come up with about the Earth's core?) and their technology (presumably, some societies would invent aerial vehicles to travel around while others might exploit natural resources - such as huge flying birds).

Biology - depending on how high up these continents are, your world's inhabitants would have adapted to slightly less gravity (though the difference is probably negligible) AND less oxygen. To be more precise, the concentration of oxygen is the same whether you are standing at sea level or on Mt. Everest (21%) but there is less atmospheric pressure, so it is harder to breathe. If your societies are human, their bodies would have adapted by breathing faster and producing more hemoglobin. Because of this, if the humans were to descend to the Earth's "surface", their stamina would likely increase since they are now presented with "more" oxygen for their bodies to use.

Economy - I imagine mining would be a great deal easier with so much of the underground earth exposed, so you might want to think of how a society would look with an abundance of precious metals. Would their currency be based on something entirely different from gold and silver?

Water - though it would still be replenished through rain, having rivers that flow off the continents would pretty quickly lead to a water shortage. So either water is very precious and/or they have much more advanced ways of saving water.

Land - earthquakes wouldn't exist, right? Is there a concern the continents might run into each other from time to time? Do they have technology to deal with this?

It seems to me that there is a lot you could do with this concept. Good luck!

Erosion is not your friend, and stuff gets scarce

Your floating continents are only so thick, and if there is land below, perhaps they aren't continent-sized but instead country-sized. There are no oceans to fish, no oil fields to drill, and few if any volcanic minerals. You won't have coal or diamonds, and you'll probably have very little metal in general if the islands are as thin as those in the picture. Water will also be a precious resource gathered every time it rains, since any lake or river falling off the island essentially drains away.

The temperature of islands is still dependent on latitude; polar islands are cold, equatorial islands are hot. You'll lose many of the effects of living near the ocean, such as increased precipitation and moderate temperatures. Depending on the height of the islands, you may see them get very cold at very high altitudes - anticipate snow-capped mountains. Rainfall is also altitude-dependent, but I think it's safe to say your islands can get rain. My biggest concern is the effect of rain on geology.

Weather erodes terrain. Over millennia, rain reshapes landscapes; over eons, it levels mountains. If your continents aren't restored from underneath (read: plate tectonics + volcanism) the dirt will basically slide of the edges. This is bad news for your already resource-poor islands. This type of geology might make for some interesting features, though. Whole islands may calve and split like icebergs as they erode. I would also worry about erosion from underneath - condensation on the underside of the islands may create some gorgeous stalactites hanging down, but it will also eat away at the land.

This topic is entirely dependent on how long ago your islands were lifted. On Earth, we see similar species on different continents (ex. American possums vs African possums) due to continental drift. We also see similar species because they crossed the ocean (ex. Galapagos tortoises vs those in continental South America) and sometimes even the same species on different continents (ex. humans). If each continent is totally geographically isolated, your species will likely evolve divergently faster, since their populations won't mix. Birds will be the only mechanism for spreading species (which is how some man-made ponds get fish in them!).

If your floating continents were originally land continents, the your oceans lost their shallow areas. So ocean fauna and flora that grew in depths less than 500’-1000’ lost 100% of their habitat.

So this could mean that there are no mussels, large crabs, lobsters, and none of the predators that feed on them. Also, I think there wouldn’t be any reefs or the creatures that live in them like moray eels.

There might be very small crustaceans like pill bugs and sand fleas. But terrestrial animals like birds that depend on tidal basins to hunt for food would be challenged to survive.

And given the height of land over the sea, sea otters and seals might be in quite the bind. Some might survive by living on subsurface extrusions of basalt rising from the oceans depth, but those are generally pretty rare compared to the lost coast line of the former continents.

Not the answer you're looking for? Browse other questions tagged science-based magic science-fiction climate earth or ask your own question.

8
What would life be like on the remnants of a shattered planet?
2
If Earth mass is doubled, what is the change of earth's orbit
15
How could an Earth-like planet develop huge pinkish-purple forests on ocean surfaces?
5
Would it make sense to mine/industrialize the planet Mercury with AI?
2
Effect of lower average temperatures on the tropical savannahs and deserts of a planet