Can Florida become an island?

I've been building a world set in the near future (decades/centuries) that includes Florida as an island. My intent was for a manmade or natural event to occur at or near the South Georgia Rift, but I can't seem to find anything capable of creating that much force that wouldn't also cause apocalyptic damage far beyond the region.

Not very easily. Or not in the way you (I think would want to). Florida is not flat. Miami is just around 16 ft above the sea level while Tallahassee is 190 ft. So rising water level would flood the penisula part first rather then closing gap beetwen Gulf and Ocean.

But there is a belt, coming from Spring Hills, Dunnellon to Ocala, Palatka and ending In St. Augustine. It's land beetwen two rised patches of land. On the Palm Coast it's also very damp and with Saint John river. So you could use this to flood Jacksonville and turn additional water to move it toward the gulf.
Soemthing like this 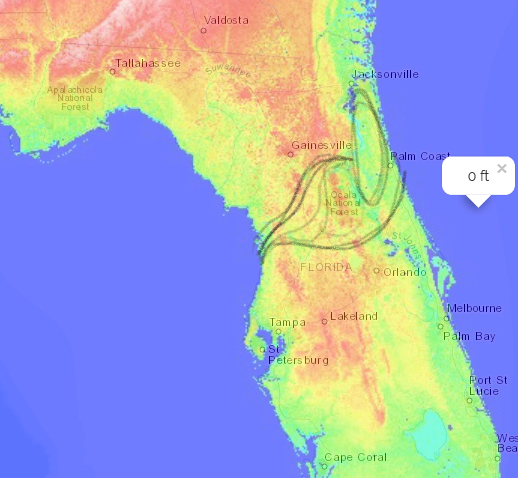 Keep in mind that this would need to be 99% man made. Any natural occurence in rised sea level would result in floodin Miami, Fort Myers and Tampa.

Here is a projection of Florida with sea level rise. 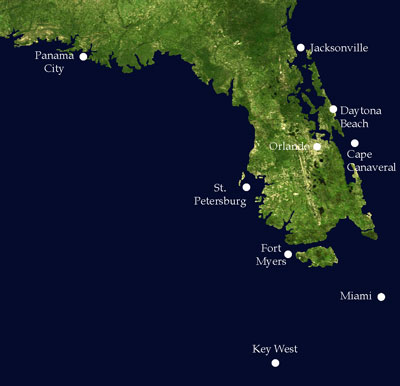 Maybe your future people avoided this by excavating out the peninsula at about the level of Daytona Beach and moving the fill to Miami to keep it above sea level?

Not the answer you're looking for? Browse other questions tagged weapon-mass-destruction natural-disasters tectonics geophysics or ask your own question.

6
How to build a tsunami proof island city?
14
How long after a global nuclear disaster would the world become habitable by humans again?
1
How to naturally maintain a Earth-sized Planetary Ring System and the possible periodic bombardment that can ensue?
23
How can I destroy a great deal of infrastructure without killing many people?
1
corrected projections: Is this world map realistic? I tried to use plate tectonics to inform my mountain and island chain placements
13
Can a liquid sand ocean exist naturally?
11
Can a continent naturally split into two distant parts within a week?
5
Can Someone Help Me Determine Plate Divisions?
6
Can Shade Balls be used to stop hurricanes?
8
Could a robot that can survive at the center of the Earth also survive a nuclear explosion?