Feasible and rational way to give food and water to a prisoner?

There is a lord who is being kept prisoner in a castle tower by a griffin who has taken over his home, but requires the lord be kept alive for political value. Naturally this requires the griffin giving him food and water.

Food should be simple, either feed him stuff already stored in the castle and/or once that runs out, give him leftovers of what the griffin eats (deer, sheep, goat etc). But what about water? The only way I've thought of is the griffin taking him out of the tower, flying him to the nearest river or stream, have him drink from there and then take back him to the tower but that doesn't like a good idea.

Can you help me?

Edit: Wow, I didn't expect this question to gain such traction. Thanks folks :)

In medieval times, this was given quite a lot of thought as castles were designed in most cases to survive a siege.

Food is an issue during a siege to be sure, but water more so; this ties into the law of 3s; you can survive 3 minutes without oxygen, 3 days without water and 3 weeks without food. These are of course approximations, but you get the general idea. Water was always going to be the biggest problem in a siege as humans (and stock) need to drink so much of it and don't live well without it.

Also, it wasn't uncommon for the wells outside a castle to be poisoned in times of conflict; there was often minimal security on the outside of the castle wall by comparison to inside so wells were often targeted as a weak point in a castle's supply chain.

How do you fix this? You dig a castle well. Most castles had one of these, and many of them had to be dug very deep thanks to the fact that the castle was often built on top of a defensible hill. The point being, that your castle most likely has a well and so long as you give your king access to it you're all set.

But (I hear you say), isn't that a risk? Can't the king escape that way? Well, no. He could commit suicide by jumping down the well head first if he had a good reason to do so but wells are not vertical tunnels to a cave system; they generally just go down deep enough that the groundwater levels are now above the lowest part of the well, which then means that the bottom of the well fills up with water from the groundwater supply.

Ideally, you'd have servants fetch the water to the room in which he is incarcerated, but depending on how malevolent your gryphon is, making the king walk down the tower stairs, draw his own water and carry it back to his room each day might be a fitting insult to rub salt into the wounds of the king as well. Either way, the point is that your king is unlikely to have to leave the castle in order to get to a water supply, which is good news for your gryphon in terms of security, but bad news for the king if he's out of shape from sitting on a throne 10 hours a day for the past few years.

A number of options.

The castle has a well within its walls so the lord can toss a bucket down and get water for himself. A more modern castle might have hand pumps in appropriate places so maybe no need for a bucket.

Assuming the castle isn't in a very dry region, rain could be collected from the roof and fed directly to cisterns, from which the lord can get water.

Alternately, the castle may be surrounded by an impassable moat (or have a small stream running through it) - the lord can drink from there.

If there are no water sources in the confines of the castle, or if the griffin wants to keep the lord trapped in a water-less part of the castle then it could fly to a pond, immerse itself then fly back and let the lord lap water from its still dripping body.

Worst case scenario - the lord has to survive by drinking the blood of some of the creatures killed by the griffin.

Ask tribute to the locals

The lord not only controlled the castle, but also the whole region around it, and all the yokel that live there.

The griffin does not only control the castle, but also (even if it's less than the lord), the region. He can probably ask to one of this folk to gather some water and deliver it to the lord. Same can be done for food, so he don't have to only eat raw meet.

You don't even have to search them in the countryside if you didn't kill all the serveants/noble family in the process.

If his food contains enough water, he doesn't actually need to drink. Maybe the griffin brings him mostly fruits and vegetables.

You do realize that he's probably going to need water for more than just drinking, yes? If the griffin wants to keep him alive, that means taking into account basic hygiene, and that needs water.

The griffin has enough limbs to be able to carry a bucket to the nearest river or lake, fill it and fly back. If it's a big griffin maybe it can carry enough in one trip to provide a day or more water for the lord. The problem would be getting the water into the cell...

You can have a hole in the door (or bars) big enough to get a meal through without too much trouble, but a hole in a door big enough to get a bucket through would allow a (desperate) lord to get through. So maybe posit a cell that has an open drain for bodily functions and every so often when the stench gets too much for it, the griffin just throws a barrel full of water in to the cell to wash the lord down and wash all the loose stuff down the open drain. It means your dungeon is above water table so the effluent can drain out rather than ponding over the cell floor and spilling back into the corridor. For drinking water, let the lord dip into a bucket outside the cell. If he's fussy he can rinse his hands with a cup of water sometimes when they get too crusted with noxious stuff

The Griffin can store water in its feathers, it flies to a nearby lake, immerses itself, then carefully flies back.

The Sandgrouse is a type of pigeon that purposefully carries water in its feathers for its Chicks. The Chicks then 'milk' the carrier (either male or female) by sucking water from its feathers. 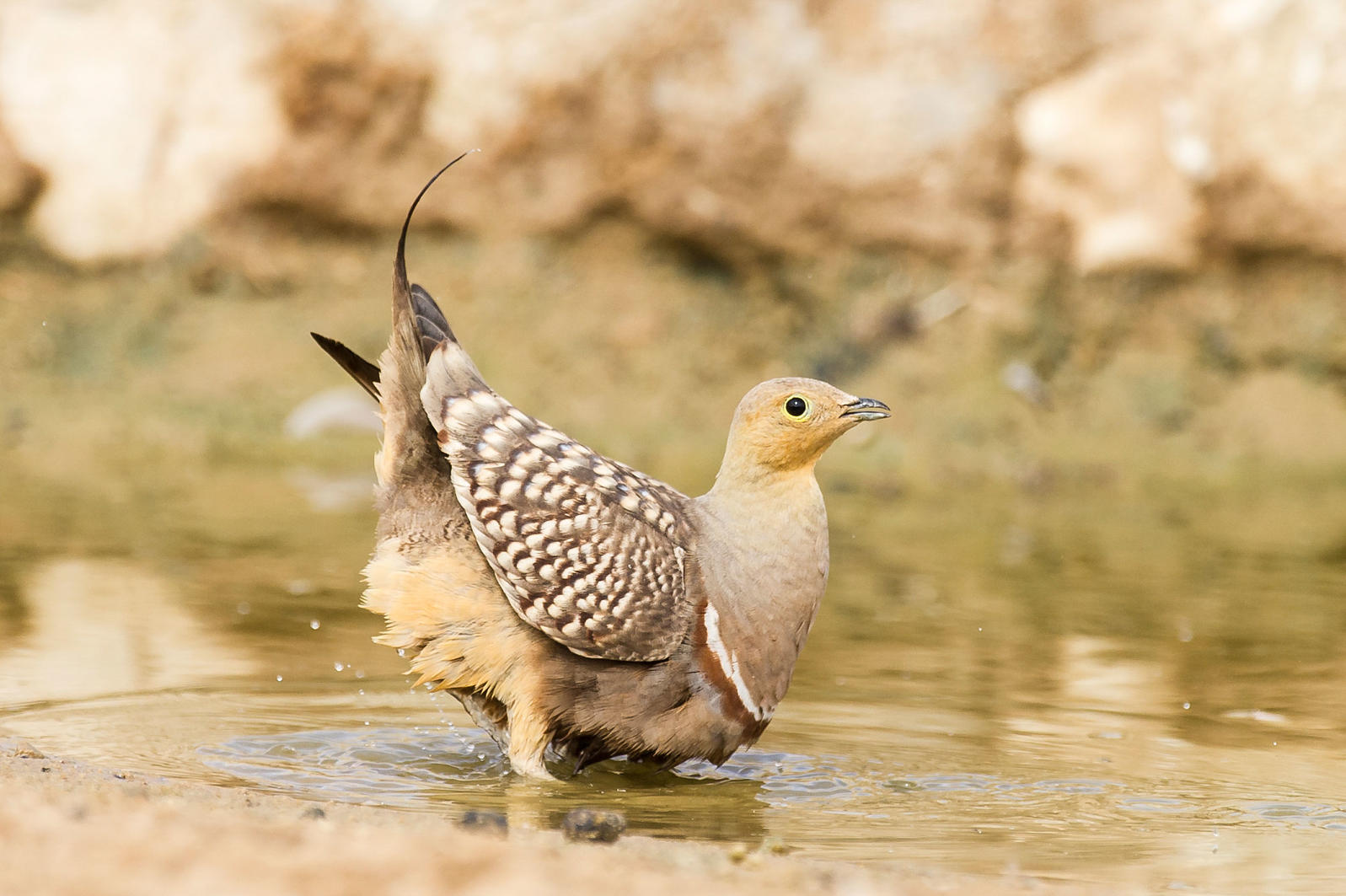 ^Image of a Sandgrouse gathering water

The same could perhaps be done by the Griffin, with the King licking its feathers for water.

Or, alternatively, the Griffin could 'shake' the water into a locked tub or bath, for which the King can then relax in or drink and still be securely imprisoned.

All you get is light and a large enough peace of soil + water & some seeds. If you dont grow food for air and food you will starve and die. If you eat your seeds - you will die. Its basically a miniature world to be robinson crusoe in..

Not the answer you're looking for? Browse other questions tagged humans medieval survival food water or ask your own question.

6
Mechanisms behind different metabolisms for regular and synthetic food
3
Bringing water and heat to an isolated mountain village
8
How to bring water and heat to an isolated and poor mountain village with extremely low costs?
7
Can food be grown/raised underground in a sustainable way?
13
Liquid water on both sides of a tidally locked planet. Feasible?
3
Does a character being allergic to water (specifically the $H_2O$ molecule) make rational sense?
3
Feasibility of a griffin living in a castle?
20
Food and cutlery for intelligent snakes