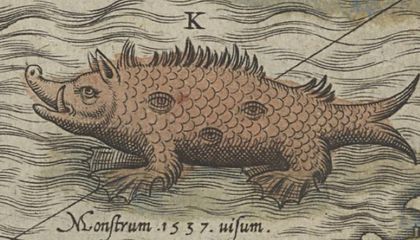 now it's mostly likely that they were based off whale bones which were misconstrued as boars. but let say that they where correct what species would they have evolved from and what evolutionary pressures would lead to them?

some characteristic of this animal are:

So, what you're describing as a mythical creature is actually very close to a creature that existed some time after the Cretaceous period - Ambulocetus.

The sizing is a little off and it is certainly unlikely that it had eye motifs on its skin and it didn't have tusks, but there is a lot that this creature has in common with your sea boar. As such, it's useful for defining the evolutionary pressures that led to it.

It is generally held that Ambulocetus, or 'walking whale' was a creature that had evolved to being on land and then went back to the oceans because of richer food sources. The fact that it could survive on land as well as in the ocean meant that it could hunt in the ocean but could also have its young on land, where there may have been fewer predators. This creature is thought to be the ancestor of modern whales but was clearly a predator in its own right in its time on Earth.

If you look at your picture and then some of the pictures in the link, you'll see some distinct parallels, like the webbed feet and the large snout. The tail is interesting in that a modern whale fluke is probably the vestigial rear legs which is why Ambulocetus doesn't have a fluked tail. That is the one part of the design of a sea boar that doesn't work with in parallel with the Ambulocetus model.

In short though, the sea boar is likely to form from a creature that is struggling to find enough prey on land, and so adapts to swimming in the ocean again to harvest fish and other larger prey that swims in the water. It is probably getting more and more comfortable with an aquatic life but still comes back to land for a sense of security and perhaps to raise its young, much like penguins do today.

Not the answer you're looking for? Browse other questions tagged science-based reality-check biology evolution mythical-creatures or ask your own question.