How would a biological drop pod make it into the atmosphere and land safely? I have a race of aliens that use biological tools instead of technology. Their ships are living beings that can travel through space to find habitable planets. After flying over a planet they find suitable they launch their drop pods which are like plant seeds only they need to survive atmospheric entry and the landing to plant vegetation. After seeding the planet and successfully terraforming it they use the same drop pods to send themselves on their new planet. 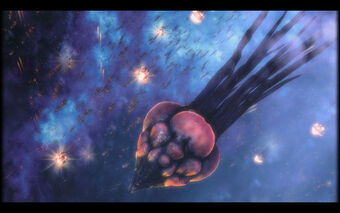 It's very much like a more peaceful version of the Zerg swarm from Starcraft. Only the mystery is, how would the drop pods be designed for such a task?

I'll suggest something a little like the wonderful 60s project, the paracone.

A re-entry system with no parachute, no landing rockets, no wings and no moving parts. The shape-holding structural elements aren't even rigid initially... you pump them up with some suitable gas. 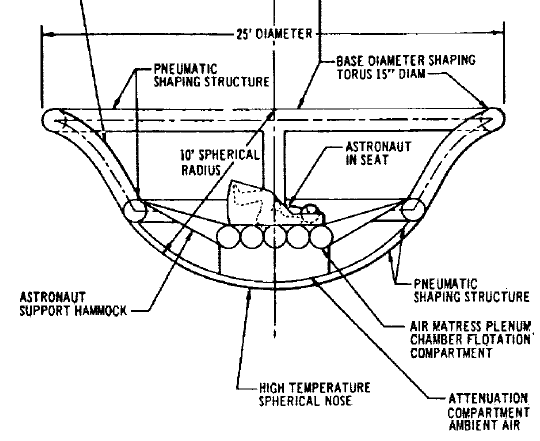 The payload is injected into a re-entry trajectory, and then the heat shield is inflated. The shield was intended to be made from a woven nickel alloy fabric coated with telon which isn't particularly organic, but a spacefaring race should certainly have access to nickel and developing a means to extrude filaments of it doesn't seem outrageous. Other natural ceramics and inorganic refractory coatings certainly exist, which might allow the construction of a ablative ceramic scales, perhaps with a reserve of water to be used in an open-cycle cooling system.

The paracone was limited to 9.6 gees and couldn't heat up beyond the ability of the astronaut's portable life support system to protect its occupant from, but a robust payload of seeds could probably survive higher temperatures and g-forces than a mere meatbag could and still remain viable.

The terminal velocity of the paracone would be sufficiently low that a crumple zone on the nose would protect the cargo from the forces of impact, but your seeds might not even need that much care.

Imagine a cross between an onion and a pumpkin.

The flutes of the pumpkin cause the drop pod to spin as it descends. At higher pressures this will generate lift and slow the descent.

The onion layers, composed of a tough poorly thermal conducting fibrous weave and a low vapor pressure gel. As each onion layer heats up and burns off, the gel slowly vaporizes and boils off, keeping the layers beneath it at a predictable temperature (the boiling point of the gel)

Once all the onion layers are gone, the pumpkin center starts to heat up. The moist center vaporizes and the pressure inside the pumpkin builds and builds, until it bursts and explodes, spewing seeds pods with streamers in all directions. The altitude of detonation is low enough the the seed’s streamers provide sufficient drag form the seeds to survive impact with the ground and bury themselves.

I think the image does help here a lot. My first thought was more a jelly-fish style movement.

Landing on a planet would be like a parachute opening and leaving the planet would require the trailing tentacles to give it speed - another version could be that the bell itself could build up some sort of energy, which drives the pod upward from the planet.

5
Halfday planetary scan: what do you get?
5
How does my critter communicate across the liquid/air barrier?
3
Immune resistance to biological colonisation
9
The Colonist - Part II: Landing
7
Designing drop-pods for humans
4
Adaptations for an ice planet?
16
What biological trait could make (certain members of) an insectoid species good at astronomy?
3
Designing the most plausible space "dwelling" planimals