bucking the trend of mermaids I've decided to take a different approach with my mermaids. A long time ago a group of Australopithecus diverged from us taking to the sea. some characteristics of these pseudo-mermaids" are:

Given these characteristics could such a hominid realistically exist?

Your timescale seems pretty brief, but might be doable. Australopithicines diverged from the rest of the hominins about five to eight million years ago. Looking at the evolution of cetaceans, five million years is enough time to get from something that's basically a land-dwelling mammal that can dive for food to an obligate aquatic and unambiguously whale-like animal with all of the major physiological changes along the way that would require. Similarly, the ancestors of modern seals evolved from an otter-like Puijila to a very seal-like Pteronarctos over a similar timescale, though the changes weren't quite as dramatic as those that whales underwent.

Note though that the immediate predecessors to seals and whales were things already adapted to swimming and hunting in water. Proto-humans seem to have arisen and lived in quite different environments, which adds a non-trivial barrier in the way of the changes you'd like.

Seals are all different colours, both in terms of skin and fur. Cetaceans are also varied in colour. You can hand wave whatever colour you feel like, I'm sure.

have a thick layer of blubber

Seems fine... whales and seals independently evolved this from a land-dwelling mammalian predecessor, so it seems plausible that it could happen here, too.

That seems entirely like handwavium at this point, as only one species exhibits human-level intelligence and other intelligent humanoids are all dead, possibly as a result of the action of the direct ancestors of modern humans. You're the author though, so have at it.

have webbed hands and feet

Fine. Note though that there aren't a whole lot of diving predators who use their forelimbs for catching prey; those arms are not at all hydrodynamic and will impede their owner's ability to hunt. They make more sense in generalists, especially tool-using ones

have some type of echolocation (but can communicate like humans)

Dubious. Echolocation seems to have taken longer than 5 million years to arise in cetaceans, and required a lot of complex and specialised physiological changes. I think this is probably the least plausible thing you've requested (after human-level intelligence, perhaps) and it would be more likely that they've just got good underwater hearing, eyesight and other useful sensory modalities that aren't wildly different from their ancestors.

have sharp teeth (being carnivorous)

The forebears of seals and whales were already predators. The forebears of australopithecus, not so much. Human (and hominin) dentition and digestive systems seem best suited to an omnivorous lifestyle. Perhaps this, too, could have changed over time, but it doesn't seem entirely necessary and does seem a bit dubious. There's reasonable non-meat-based eating to be had around the shoreline, both above and below, especially for clever species.

have slit like noses (lacking a sense of smell)

Seals still generally have a good sense of smell on land. Remember that smell and taste are difficult to disentangle, and having a good sense of taste is handy for distinguishing toxic or otherwise unhealthy food from the good stuff.

thighs have started to fused

Also seems fine. Remember that breath holding times in marine mammals are related to the depth they need to dive to hunt. Deep dives require longer breath holds, but also substantially different respiratory physiology, not to mention the difficulty of locating and dispatching prey in deeper, darker water. Plenty of seals and other diving predators (like penguins) dive for only ten minutes or less, because that's all they really need. Still, longer dives don't seem unreasonable, so there's no reason you couldn't have them too.

As an example of a real-world primate that has some early adaptations to the water and can dive and swim, have a look at proboscis monkeys. They don't hunt or forage underwater, but eat fruit and leaves from trees near the water and use water as a handy escape route and take advantage of the open space is provides for group social interactions.

Ever heard of Dugongs?

Dugongs are mammals that have gone back to the oceans, and share a lot of the attributes that you describe in your question. They even look from some angles to have commonalities with humans and are thought in some circles to be the origin of the mermaid myths. 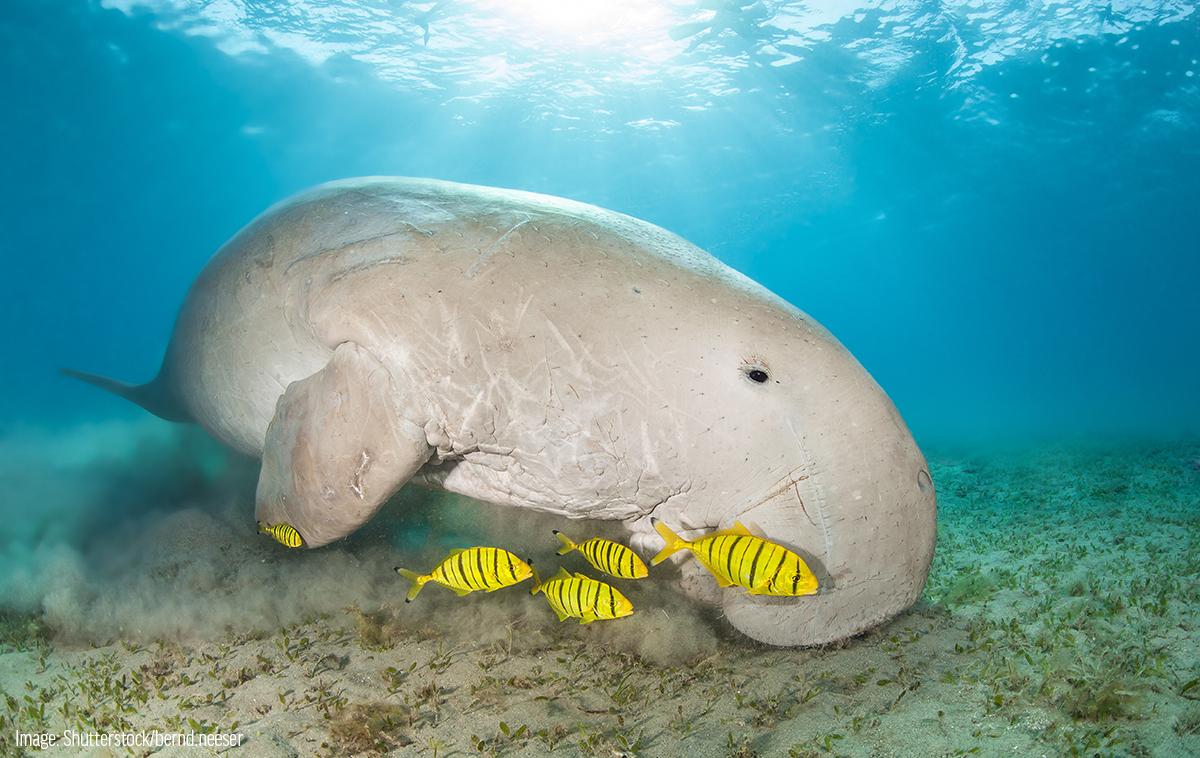 Ultimately, the primary difference between these creatures and the one you describe is the level of intelligence. The fins as opposed to webbed hands is likely a by-product of not being a tool using species before returning to the oceans, but I would imagine that if the species that DID return had tool building skills, they wouldn't have hands that evolve back to fins as opposed to being webbed.

What is more difficult to understand is WHY a creature with intelligence would make this change. Arguably, one reason might be climate change (a warm blooded creature would find it easier to maintain comfort in water than on land during a sustained heat wave) but it would also lose a lot of the advantages that life on land gives it in the first place when coupled with intelligence; cover from predators, resources for tools, etc.

Is it possible? Sure, and the Dugong proves it. Likely? Well, that is a whole other matter and one would argue that the prevailing environment in which this is likely to happen is going to be rather specific.

The only thing that bothers me in the picture is intelligence in species adapted to an aquatic life style.

There need to be an evolutionary pressure from the environ to develop it - if a species can live without intelligence, it will. Maybe similar with the transition from jungle to savanna - not enough food to forage (is all seaweed toxic?), all the prey is large or agile enough to require hunting in groups (require communication/coordination) and the use of weapons or traps to kill it.

The impossibility of manipulating fire in aquatic life conditions is a serious impediment for the evolution of intelligence - no food transformations (some nutrients may have been beneficial in the the evolution of intelligence), no capability to preserve the food over longer periods (no causative temporal relations to favor the use of memory in cognitive processing).

Also, a watery environ is less likely to lead to technological development: advances in chemistry and metallurgy are hard without heat, no steam power, little chance to discover static electricity; batteries without access to metals and insulators... I doubt it.

Not the answer you're looking for? Browse other questions tagged reality-check biology evolution fantasy-races or ask your own question.