here what Xing Tian look like and the description in the wikipedia. 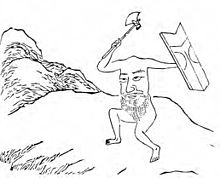 Xingtian appears in chapter 7 of the Shanhaijing (Classic of Mountains and Seas), which states that he fought and lost against the supreme god to become the supreme divinity.1 The god decapitated Xingtian and buried his head on Changyang Mountain.1 However, Xingtian persevered, using his nipples as his eyes, using his navel as his mouth, and brandishing his shield and ax.

and here is the europe version name Blemmye for this type of monster. 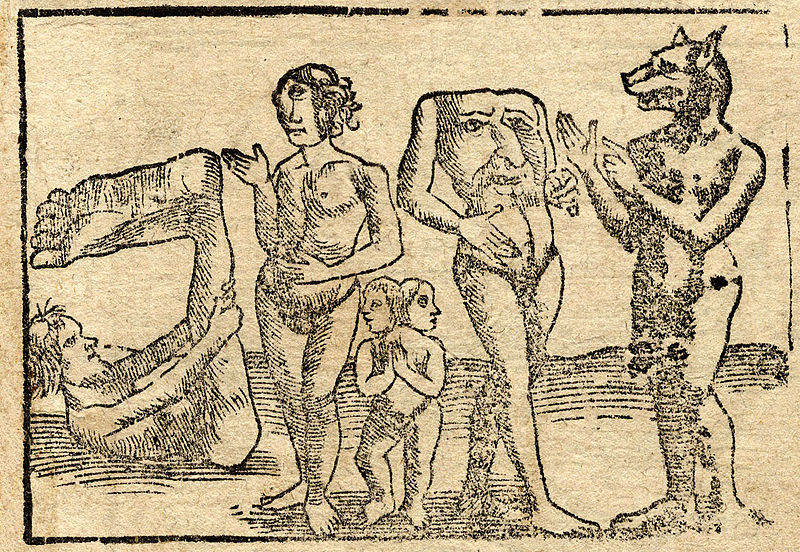 A people of headless men with faces on their torso, later called the Blemmyes, was mistakenly thought by ancient Greek historian Herodotus to dwell on the coast of Lybia, along with the Cynocephals. The name of 'Blemmyes' was added to the legend by Mela and used by Pliny the Younger. Latin compiler Solinus also reported that Blemmyes were born without their facial features, which were born separately and had to be added onto the baby manually.

Various scholars in the Middle-Ages expanded on the Blemmyes' legends, notably claiming that Alexander the Great met a tribe of Blemmyes whose skin was golden, who had long beards that reached their knees; in some versions, he was said to have captured thirty of them to show the world, something he was unable to do because the Blemmyes died during his journey. During this period, Blemmyes were sometimes thought to inhabit Ethiopia or the Andaman Islands.

Overall, Blemmyes are usually presented as sapient but barbaric tribesmen, being notably never shown to wear any clothes at all. In some later literary versions, they were even depicted as aggressive and even cannibalistic.

so i wonder what evolutionary advantage or pressure to create this thing ? and would there any benefit if they have a body as the head like that ?

feel free to edit my grammar and the tag to the appropriate one.

Anything is possible really, it just takes time and must yield an advantage along the way.

What you're describing is essentially (over many generations) the following sequence:

Now - here's the tricky bit. Evolution must yield advantage at every step. There is no goal in evolution, so from steps 1 to 5 each stage must be more successful than the prior stage. So perhaps here are the pressures to enable this:

Not too far out of the question - mainly it's all based on sex. (ie. Men who have these tendencies are seen by women to be more stronger, more intelligent, or simply more desirable, and vice versa). There are certainly many courses evolution could take for us in the future.

Something like this may evolve from a pangolin or other bipedal mammal that became larger. This pangolin would change its diet to fish, and gain tooth-like extensions to consume fish. Its forelegs would become unneeded, and would be lost. They may also gain larger and more mobile ears, due to sexual selection. These ears would become stronger and more mobile, until they ended up as full limbs. They may also become more intelligent, and gain a larger head. They then may become browsers, and become upright to reach higher, with their ear-limbs being used to grab things. With the ability to grasp objects and their intelligence, they would become sapient

19
Negating the negative effects of childbearing
7
How does this Monster's mouth work?
20
The Biological Dullahan
4
Anatomically Correct Humbaba
11
Speculative Biology of a Haplodiploid Humanoid Species
6
What is the bio-mechanical plausibility of humanoid vampyres exracting blood by biting into a person's neck?
5
Can the dunkleosteus jaw model work on a land predator?
5
Can facial Nerve damage cause all facial functions to shut down (temporarily)?
4
Scientifically Plausible Ranged Pain-inducing Weapon?