This is a submission towards the Anatomically Correct Series 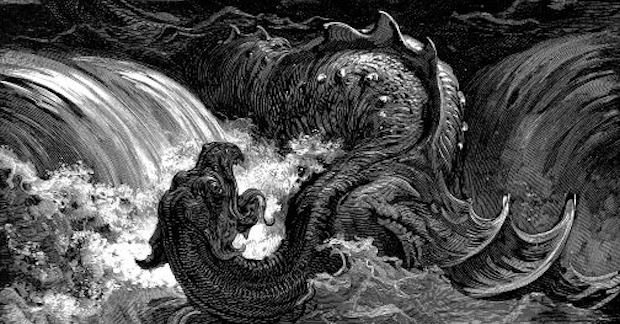 The leviathan, (in biblical terms), is describes as being a colossal serpentine like creature, it’s back is covered in scales that are compared to the strength of shields. It is also capable of breathing fire and is capable of creating wave that are massive, but isn't capable of destroying a whole city.

The question I want to know is, what environmental pressures would cause for such a creature to exist?

The late Cretaceous was a prehistorical period (right before that whole asteroid thing) that experienced a high level of oxygen saturation (35% to our 23%), high sea level, and warm temperatures. The warm temperatures are good for cold-blooded creatures (like serpents), the high sea level is good for aquatic creatures, and the high oxygen saturation resulted in some creatures which had poor respiration methods (like insects) being able to grow much larger than they can today. The world would have to be very lush, to facilitate lots of well-fed prey for this Leviathan to feast on. A barren world won't do.

Some animals, like sharks and reptiles, keep growing until they die. The hypothetical leviathan, if were thousands of years old, would become massive.

Leviathan could have evolved from a small group of feral goats that had 6 legs due to polymelia. These cows might become arboreal, and shrink down. Due to their small size, they may evolve to glide using wings derived from their middle limbs. They male become more sexually dimorphic, with the males becoming far larger. These larger males would be unsafe in the trees, and would venture down to the ground. These goats might end up in a more coastal region, and the females may sometimes end up in the water from gliding. This will make a pressure causing the females to become more aquatic. To avoid ground predators, the females may spend longer underwater. They might evolve to become predators. This would require them to get extra armoured scales to protect against fighting prey. They may become nocturnal, and evolve to use light to attract curious prey. The males might become larger, and start caring for young males when they leave the water. In order to protect the young males, they may use a loud roar to scare away predators. The females may evolve to huge sizes, in order to feed on larger whales and other large prey, as well as to store larger amounts of milk for their young. The young females may face predation from birds, and so might evolve to spray out reactive spit, that may evolve to become firey breathe.