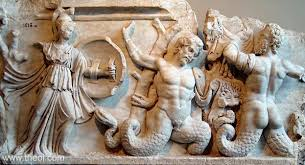 A creature from Greek Mythology; giants with legs that resemble snakes that fought the gods and Heracles in a war (not to be confused with the Titans). Is such a creature possible to make anatomically correct (I know snakes for legs is impossible, but could there be something that resembles it)?

I would say you just have to think about these creatures a little differently to make them work. If they were primarily aquatic, water will support vast amounts of weight and snake-like appendages might even be favorable as a means of propulsion in water. They would be incredibly fierce in the water, like giant octupi, but with bones they could still awkwardly haul themselves onto land. To a hellenistic world, an intelligent whale-octopus would be like a god. Think Moby Dick with tool using.

I'm not 100% sure what you mean by "anatomically correct", but I'll give you my take on it.

Let's consider what we see in the image: the whole body, except for the legs, is human. This means that all vital organs are still in the same spot. Most systems would still work exactly the same as a human: respiratory is unaltered, digestive, urinary, reproductive, none is heavily affected by this (we can clearly see their reproductive organs and their butt, so it's safe to assume everything works as intended). They could as well be double amputee and all of that wouldn't change.

Now let's focus on what's different: their legs are covered in scales and shaped like snakes. The scales are the main "anatomical issue" I see. A creature with scales would have most of its body covered by it: think of crocodiles or snakes (since that's what they are). You would only find softer skin on their abdomen (belly), but it would still be very different from human skin. So for it to be "anatomically correct", you would need most of the body to be covered in scales, much like the reptilians we see in many fantasy and sci-fi movies, OR have those legs be covered in human skin (which also implies hair). As for the shape, while I don't see the evolutionary benefit of having two snake-like tails instead of your legs (it would work best either having only one larger tail, kinda like Medusa had, or several appendiges working similar to an octopus tentacles), it's not necessarily an anatomical impossibility. This would obviously imply a big difference in both your muscular structure and your nervous and cardiovascular systems, but not necessarely impossible (again, very unlikely something evolved this way, but that's not the point).

The last question becomes "How would you move around?". Having two appendiges kind of implies you alternate one to the other, just as we do by taking steps with our legs. It would look very weird and probably less stable than a human walk, but it could work. It's very unlikely, especially if covered in skin instead of scales, that you would slide similarly to how a snake does. On the plus side, it would most likely improve your swimming capability.

Realistically, giants of any kind are probably not possible. This is because of the square-cube law. This says that if you take a regular person and scale them up by double, they're not twice as big... they're twice as long. Instead their volume will be about eight times larger. This is a problem, because all of your bones have gotten twice as big (and can support twice the weight) but your actual weight is about eight times what it was previously. If you grow your creatures too large, and they "look" like they did before you inflated them, their bodies will be too large to support their own weight.

This leads to a lot of the phenomena we observe about large and small creatures. Ants can carry hundreds of times their own body weight. Fleas can jump the equivalent of a 10-story building. On the other end of the scale- elephants can't jump. If you drop an elephant from a height of 12 inches you will shatter every bone in their legs. The largest creatures on earth, whales, don't have to support nearly as much body weight as their land-dwelling counterparts. If you put a whale on land it will suffocate under its own weight.

Consider a rectangular prism, that has a depth D, a width W, and a height H.

The length of the cuboid is the maximum of D, W, and H.

The volume of the cuboid is D*W*H.

So any giant thing that looks like a regular size thing is generally not physically feasible, no matter what you're talking about.

But that doesn't mean that giant things aren't feasible, we build skyscrapers and things like that every day. They just have to respect the square-cube law. Some tips for building giant things:

So, what do you need for snake men? You need great big legs with big bones in them, perhaps more than two (more like an octopus). You have a smaller torso with skinny arms on top, though your snake men still need to be able to throw their body weight around and exploit their size. Maybe you could have metal skeletons or something too.

The only way I could think of a creature like this evolving is if it is either extraterrestrial, or from another dimension.

This is because, with the exception of conjoined twins, there are no organisms on Earth that have two or more heads.

If this creature isn’t from Earth however, I do have a good idea. It’s feet could actually be highly evolved mouths, that the Gigantes uses to eat.

Not the answer you're looking for? Browse other questions tagged reality-check creature-design evolution fantasy-races mythology or ask your own question.