I want to make an atmosphere rich in carbon monoxide, but as it doesn't stick around for very long, it will need to be replenished. I'm looking for concentrations comparable to those of carbon dioxide or greater.

I have a previous question, Sustainability of Regular Global Wildfires Due to Oxygen Rich Atmosphere, that could be an answer for this, but the cyclic nature of the fires would mean that for long periods of time the atmosphere is relatively normal with little to no CO (or CO2 sometimes according to one answer).

Could I have life produce it? Like oxygen on Earth. What reactions would organisms need to do to generate and use this much CO?

Somewhat to my surprise, there are, in fact, biological metabolic pathways that produce carbon monoxide. An enzyme that does this job is carbon monoxide dehydrogenase which pops up in various colours and flavours of bacteria and archaea. Usually it is used to oxidise CO into CO2 but it turns out you can run the process in reverse, given a suitable source of energy.

Secondly, it isn't immediately obvious what the benefit would be to any organism that expended energy to split CO2, but then didn't do anything useful with it. I'd expect it to make some use of the carbon, like turn it into carbohydrates (or whatever) but instead it would just have to let it waft away. That's a peculiar thing to do with a useful and expensive to produce material. Sure, you get oxygen out of it, but mostly what oxygen is useful for in biochemical pathways is oxidising stuff with carbons in it.

That sort of suggests to me that the only real practical source would be volcanic, but I don't know enough about volcanism to make any further suggestions in that direction.

Your solar system is moving through a carbon monoxide rich molecular cloud. 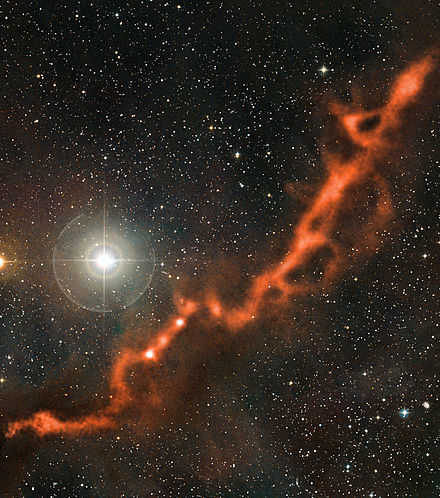 There are regions of the cosmos occupied by immense clouds of molecules. There is a lot of hydrogen and second to hydrogen is carbon monoxide, followed by other molecules including methanol, ammonia and others.

The Taurus Molecular Cloud, or TMC-1, is smaller and less dense than Orion but it still intrigues professional astronomers. The complex contains hundreds of solar masses of dust and gas and all sorts of complex organic molecules formed out of the soot of long-dead stars. https://cosmicpursuits.com/2538/the-taurus-molecular-cloud/

Carbon monoxide has been observed extensively in emission at X = 2.6 mm from the 0-1 rotational transition in a wide variety of objects... and throughout the galactic center region (Solomon et at. 1972). Carbon monoxide is the most abundant molecule detected by radio astronomical techniques, and, with the exception* of H2, it is the only observed molecular constituent of the interstellar medium which contains a large fraction of the available atoms.

Your solar system is colliding with one of these clouds, which is being concentrated as it funnels in via the gravity of your sun. Your planet is in the way. The components of this cloud rain down on your planet, steadily bringing new carbon monoxide from space.

Not the answer you're looking for? Browse other questions tagged reality-check atmosphere chemistry or ask your own question.

9
Sustainability of Regular Global Wildfires Due to Oxygen Rich Atmosphere

4
What levels of atmospheric carbon dioxide can humans cope with on prehistoric Earth?
5
What fossil fuel may be found on a carbon planet?
7
How would an ecosystem based around chemotrophs produce oxygen?
6
The Great Deoxygenation Event
3
Is this planet's sulphur dioxide atmosphere feasible?
5
Reducing atmospheric pressure on Snowball Earth
4
Terraforming the Nine Earths, Episode I: Could Cyanobacteria Thrive in Muspellheim?
4
Requirements for melting snow from orbit using EM radiation