A strange concept which I came up with after realizing that vampires, werewolves and zombies are basically created by an infection from a virus. This has lead me to brainstorm how I could make a monster formed by an already existing disease. A monster that would be human or animal and possess attributes of the disease they were infected by.

I am aware that this is unlikely in the real world, but I am curious as to how this different origin would affect the monsters. Cancer is a very tempting option because it is naturally occurring in our bodies everyday. This lead to an interesting vampire variant that draws from its cancer properties.

What interests me is the cause and effect of the disease and the resulting monster. What would it look like? How would it work? How does it behave? Wether or not this is possible is not a concern since we already have the X-men that defy biology, so I will not have much competition in realism.

An important property of cancer is that it’s not actually an external disease. It’s an expression of a fault within our own bodies, specifically the parts that govern cell replication. You can’t really be ‘infected’ by cancer. Thats why your immune system is so bad at fighting it: as far as your body is concerned the cancer is you. Another defining trait of cancers is the word ‘uncontrolled’. A bit of you is growing out of control. That doesn’t lend itself well to cohesive effects such as you’d expect from a monster.

But: some cancerous tumours do grow/twist the body into growing new blood vessels, so it’s possible that the monster cancer is a set of cells that are trying to apply a different biological template atop the regular human one. Not quite growing out of control, just using a different set of instructions on how to behave than the regular, healthy cells. They’re still that person’s cells, though, and worse they have to build off the body plan that’s already there. Genetic alteration is like altering the blueprint for a building: once the building is made its hard to effect change quickly or cleanly unless you planned for it in advance.

So: your cancerous monsters are actually experiencing something that was there within their genetics all along. They can’t pass it on except via reproduction, and then there’s a chance their children will never develop the monsterisms of their parents (though certain environmental factors might change that).

It’s also possible that multiple monstrous effects might try to manifest simultaneously, which would be fun. Imagine your body trying to warp itself into multiple new, conflicting configurations simultaneously, all stop the foundations of your (already grown) human frame.

I guess you’d call that a monster mash.. 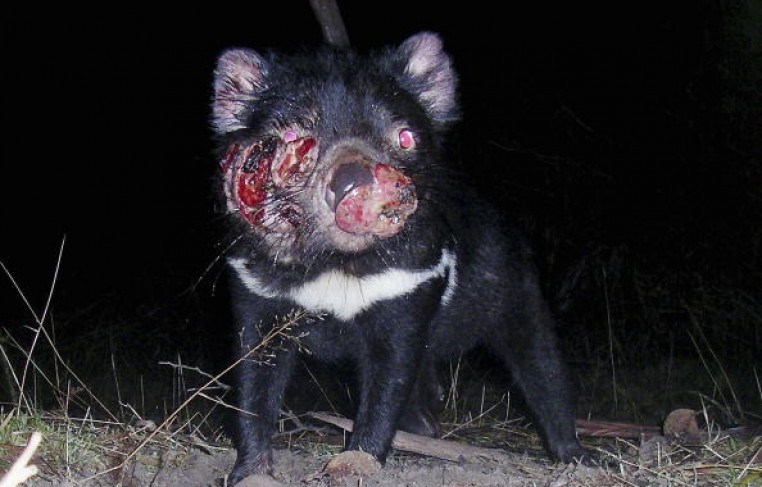 This poor creature has become an infectious cancer monster. Tasmanian devils are suffering from an infectious face cancer. It has wiped out 80% of their population. It is a line of cancer cells that can get established on a host, grow and spread there and then infect others. by direct transmission. New hosts are infected by contact when they are attacked by infected individuals. Cells from the cancer get into the scratches and wounds from the attack and then grow.

There are virally driven cancers in humans where infection leads to cancer but this is different in that the cancer itself is infectious. Person to person cancer transmission is very rare but has been described. You could extrapolate on that phenomenon to make your humanoid cancer monster.

Monsters draw on our fears

Various monster stories are rooted in key fears in the human psyche (at least partially). Zombies are often the fear of outsider hordes destroying our way of life. Werewolves can be the fear of not truly knowing someone, of the possibility that danger lurks under their skin, just waiting for the right time to be unleashed (anyone with alcoholic or abusive partners or family can understand that one).

A cancer monster in a fantasy world would come from the Propensity Towards Evil, seeded in every human in different amounts. Over time, even small evil deeds add up, and when they cross a certain threshold, the Evil that was latent in you comes to life, and begins to warp your body and mind further and further towards Evil. You grow horns, your eyes turn red, and your once-noble goals are forgotten. It happens to the noblest and the wickedest, the strongest and the weakest.

I heard about a tumor whose cells started to differentiate into developed features like the starts of eyes and a nose.

I can't find the specific case study, but in general they are apparently called "teratomas."

Important notes: cancer is not caused by one specific thing. There are a million different ways to develop cancer, stemming from mutations oftentimes in the genes coding for proteins involved in cell cycle regulation. Cancer is unrestricted growth of cells, and often has stem-cell like characteristics.

Taking things to the extreme, as is your job as the writer here, it is not impossible (but has and will? never happen in real life) that a single cancer cell gives rise to a tumor that is totipotent, or at least pleuripotent (meaning the cell can divide and subsequently differentiate into all the necessary tissues for an organism to function).

Here's a neat idea, but plant cells are generally totipotent (given the right laboratory conditions including hormones etc., you can make an entire plant from any old living plant cell) and plants also get cancer. That's where I would start!

Best of luck, and hit me up if you want more details, but note I know very little about plant bio compared to animals/bacteria/fungi.

24
How could an immortal organism avoid cancer?
64
Is Cancer Biologically Universal?
2
What is the best method to immobilize a Godzilla-like monster?
9
In what sort of environment might a species with biological wheels evolve, and what would they look like?
10
Cancer activated by certain thoughts
1
Anatomically Correct City-leveling monster
18
Silver needs to make contact with the skin to be effective, but vampires are wearing armor. What now?
9
How would werewolves incorporate jaws into their martial art?