When (if at all) would an arm cannon be practical?

Having a weapon attached to your arm that restricts the use of your hand is a common design trope in sci-fi-themed video games, such as Mega Man or Metroid. They even appear in the Marvel movies sometimes. But could such a cannon ever be more practical than just carrying a gun? In other words, what assumptions would you have to make about the world, the wielder, or the use case in order for an arm cannon to be the best choice of weapon?

For the purpose of this question, assume that:

Sounds like you mostly covered the bases in the bullet points. But I'll give you my take on it. The first two are unlikely uses, and the third is what I think is it's most practical usage.

Now if you were in a culture where making a fully functional prosthetic hand is not possible, and you are going into battle, you might as well weaponize it, as was done occasionally throughout history. For inspiration, the patta is a historical gauntlet-sword that turns the blade into an extension of the arm. BUT, in a high tech sci-fi setting this seems unnecessary. The prosthetic technology would likely be advanced enough to allow for a hand which is more multipurpose.

Now the main problem is twofold. One, an arm cannon is hard to aim, because we can't naturally look down our forearms very easily. Two, a cannon covering the arm or hand is a bit of an issue because hands are very useful, and we only have two.

Perhaps you have an alien with double jointed limbs that has no trouble aiming down the sights of such a weapon. Or perhaps they have four limbs and have arms to spare. One less thing to drop, I guess.

Here's where I think it could shine. Now there is a caveat, that I think it should be arm or wrist mounted rather than covering the hand, because the hand is just too important and versatile to monopolize like that.

But should you need a quick, instinctual point and shoot weapon - going about your tasks, or you lost your main weapon, what could be quicker than having one mounted on your arm? You could make it melee capable as well, perhaps with a laser sight if you wanted. That, I think, would be the best use. Not as a main weapon or armament, but as a quick and intuitive backup weapon that's always handy.

the biggest advantage of a weapon firmly attached to it's owner over one held in hand is that a weapon typically does not care who owns or holds it.
That means, if i manage to take away your pistol, i can aim it at you.
So, a weapon that cannot be taken away has great advantages.

And then there is, of course, the fact that something that is firmly attached to my body is always with me. Maybe you've seen pulp fiction, and remember the scene where John Travolta leaves his weapon on the kitchen counter to go to the toilet? That mistake won't happen if your weapon is attached to you.

There is real life Sedgley OSS .38 pistol used during WW2. Actually, its a glove with pistol attached to it. It fits into weapon that encloses or replaces a humanoid forearm and fires deadly projectiles. It was meant as a covert operations and assassination weapon in the Pacific Theater. It had low accuracy and was realy hard to aim, but during trench combat it could work as "one punch - one shot - one kill" weapon. So, arm cannon can be practical as concealed weapon, during close quarters combat to improve melee strikes. 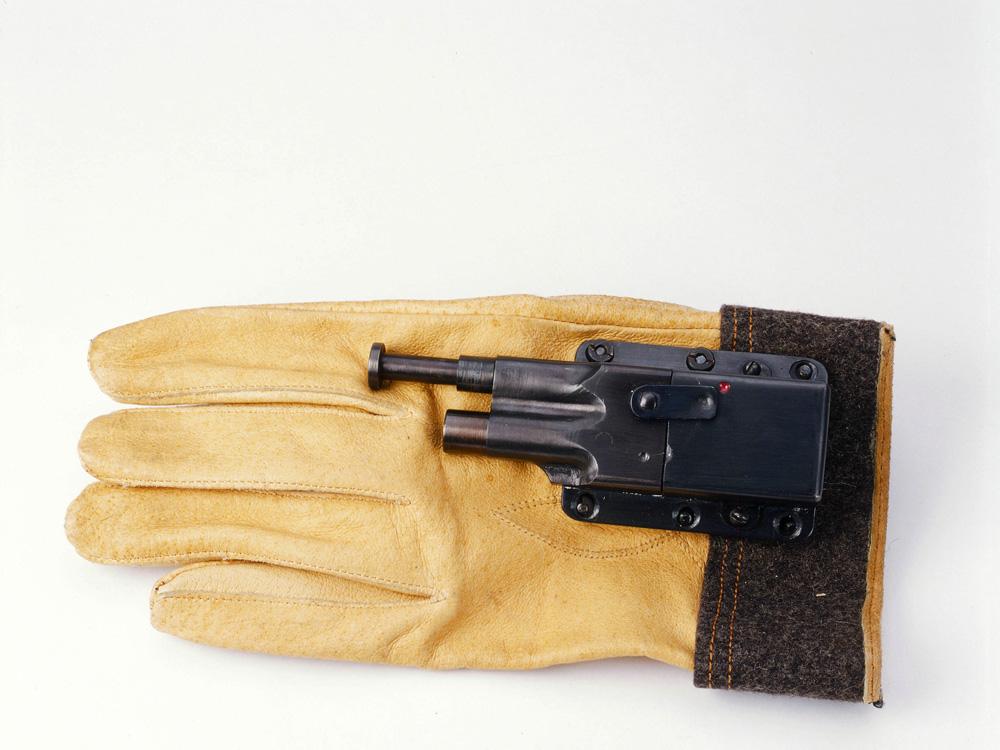 With a conventional firearm, the shooter aligns the eye, the sights on the weapon, and the target. The weapon is held in one or both hands. Counting the shoulder, there are three joints to get into a comfortable and secure hold. With a forearm-mounted gun, there are only two joints, shoulder and ellbow. This could lead to a less comfortable shooting stance.

Take a pencil and a bit of tape and tape the pencil first on your index finger, then on your forearm. Try to peer along the full length of the pencil with one eye. Which is more comfortable?

This could be overcome with electronic sights and a head-up display.

For changing magazines, clearing jams, and the like, the weapon is not held in the shooting stance. Both hands can be used on the conventional gun. With a forearm-mounted weapon, there is only one hand, the other is permanently fixed where it cannot reach the gun.

This could be overcome if there are no user-serviceable parts inside, e.g. a futuristic laser weapon or railgun.

It could work, and many answers have stated some solid pros and cons.

A solid Pro would be that you are armed at all times. Another is the element of surprise, "Aha, you thought I had nothing but now I have a gun at your head". But there are some major cons to what you may have seen in these guns from Comics and Video Games.

If you must have a forearm type prosthetic slug thrower, you have to consider some things.

Ammunition loading. Remember that rounds don't magically appear in the chamber. You have to load the weapon, and you have to do it with one hand, so you have to account for that.

Ammunition size effects lots of things. The bigger the round and powder charge, the more robust the mechanism and barrel must be. That means size. If you don't want a Popeye like forearm, this has to be taken into account.

Recoil. This is a big one. When you fire a normal rifle or pistol, the recoil normally impacts the shoulder or the wrist, both of which can distribute the force in lots of little ways. A forearm gun is going to go right into the bones of the forearm. Most automatics are therefore going to pound the heck out of the stump, possible causing stress fractures and other trauma. Recoil charts are available, but just consider Newtons third law and ke=1/2 mv^2 if you are looking for something futuristic.

Heat. Where will the heat go? You tube has videos of people cooking bacon on the barrel of an ak-47 or other rifles. I know my own bolt action rifle (.308 Winchester) gets too hot to touch after shooting 20 rounds, and that is with stopping to reload every 5 rounds, one round at a time with a pretty long pause between shots. So you have to account for heat.

Here is the solution though. A Cannon is probably out for the above reasons, but you could theoretically put a good .25 Magnum round weapon in a forearm prosthetic. The rounds are small enough where you could load several without looking like Popeye. The mechanism is fairly small, so could be concealable. Kel Tech weapons makes a neat little .25 which is the same size as an ordinary pistol, but can hold 30 rounds in a small magazine. So you get a very small form factor that can be hidden, and a surprise weapon that is effective.

That will give you the best bang for your buck. (so sorry for the pun. I couldn't help it. I have a problem)

I don't understand the problem. There seem to be so many solutions.

I suspect it's only practical for

One who has had their arm replaced with a gun (especially at a young age) without option to choose or have it removed will be sure to understand that they are and have always been meant to harm.

The thing is: it's not practical for you.

Nobody in his right mind wants to lose a hand. Yet, in some extreme contexts, it could make sense. You're a convicted criminal condemned to mine the moon? Enjoy your new personal mining tool.

You're a cyborg grown in a vat to only ever know war and killing fields? I'm sure that the hand cannon is as close to you as a samurai's sword to it's weaboo.

You're exceptionally determined to be the best quantum mechanic in the fleet? Those freakish hands which let you manipulate force fields will come in handy.

Well, there's a thing you mentioned: the cannon could serve as a replacement hand. That's important, because now we have two new crowds:

If you mean something to keep always attached to your arm it will never be practical. Even if the weapon will be very light the weight would be felt over a long time, the arm is a long lever and the oscillations would be on a relatively long arc. What would happen is that walking for a long time, paying a lot of attention to the external dangers rather than the own sensations, it could eventually cause some nausea because of the altered balance.

Another problem is that the arm may get tired, the soldier cannot choose when he in the mood for fighting and when he isn't. So he may find himself with the movements and the reaction times slowed down at the wrong time.

If instead you mean something that can be easily attached/detached it would make sense if the soldier has a lot of tools like remote controls for companion drones, special sensors, other weapons and so on.

To be honest, I love the idea of arm/forearm-mounted guns, but they wouldn't really work, not in the way sci-fi sees them. I see them working like this:

"Rats, there goes my handheld gun, now I am weaponless and the enemy knows it. But am I really weaponless? No, I have an arm-gun the opponent doesn't know about, so I can still kinda fight."

Serving as a backup weapon that is VERY easily concealed, and you don't need a prosthetic.

Thats my take on it

3
The Palm Buckler (Blocking With Anterior Arm)
32
Perfect weapon for two-elbow creature
5
Weapon concept, vortex cannon
6
Quick question: The feasability of this plasma cannon
33
How effective would a stone cannon be?
7
How would a Biological Cannon work?
33
What would the proper shooting stance be for a recoil-free arm cannon?
10
Would shotguns be a practical weapon to arm certain members of an anti-zombie military unit?
1
How practical would firearms be for early humans?