And there are plenty of mimic monsters in fantasy and folklore--vampires and werewolves, for some particularly classic examples, can pass as normal humans most of the time, and exploit that fact to get close to their prey.

But how realistic is that really? As noted, mimicry in general is common in nature, but I don't know of any real-world examples of predatory mimicry--a predator that resembles its prey, so as to easily get close to its prey. That seems to be limited humanoid monsters that prey on humans.

So, are there any examples of such a thing in the real world? Or should sci-fi / fantasy monsters that prey on humans more realistically be uniformly non-humanoid? 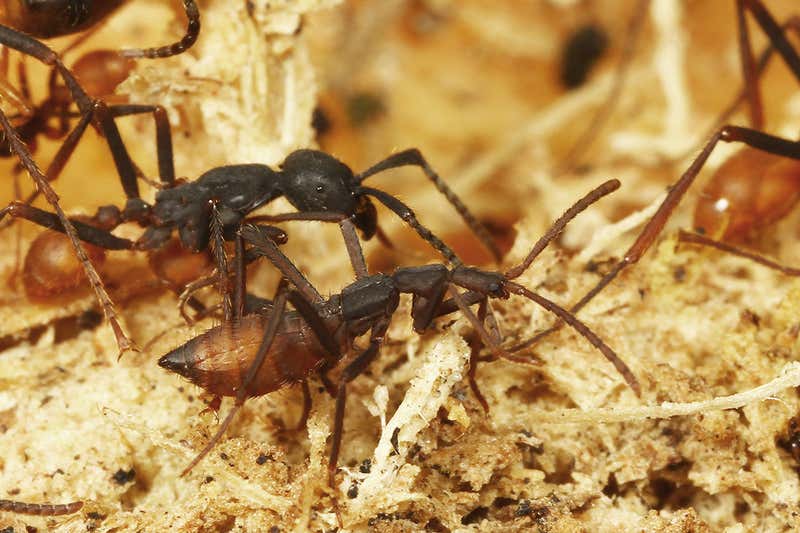 It’s one of the sneakiest ploys that has ever evolved. Rove beetles blend seamlessly into army ant societies, but instead of helping out, they devour the young of their unsuspecting companions.

The deceit is so successful that it has independently evolved in at least 12 parasitic rove beetle species – a phenomenon called convergent evolution.

These beetles march out foraging with the ants and even groom the ants. And eat ant larvae. Pretty much exactly what you were looking for.

The practical problem with predatory mimicry is that it limits the form/shape/size of the predator.

Even when it gets close to its prey, the predator still has to make the kill, and if it is exactly the same shape.. then, biologically, it is going to be more or less the same in terms of strength.

Consider a Cheetah. It has evolved to run down Gazelles, which are very light, fast and have better endurance than the Cheetah.

The Cheetah, however, is also fast and light, and more importantly it also has big teeth, deadly claws, and a faster top speed, allowing it to run down a Gazelle and kill it quickly.

But imagine what would happen if the Cheetah looked, smelled, and moved exactly like a Gazelle. Now the Cheetah doesn't have to chase the Gazelle, it can just walk right into the herd... but now, ironically, it doesn't have the teeth and claws needed to actually kill a Gazelle, and it is no longer faster than one, so if it starts trying to attack, the other Gazelle can just run away.

So that's why aggressive mimicry doesn't work among the higher animals. Predator and prey often are engaged in an evolutionary arms race of speed and strength, but at the end of the day, they must retain significant differences when it comes to things like teeth.

With humans, however, it gets worse. Humans are very social, and are good at forming organized societies. We are naturally distrusting of "strangers" and are very good at recognizing when someone seems "off".

Perhaps this explains the deep fascination with human-like monsters that is shared across all human cultures. Perhaps it has origins in our primeval struggles with the other humanoids (which we likely killed off) and ages of prehistorical tribal warfare.

We are already our own worst nightmare, and the superhuman monsters that we create are perhaps an attempt to cope with our fear through mythology.

In a literal sense, a monster with superhuman power is plausible, because their special abilities give them the predatory advantage that a Cheetah gets through its claws and teeth, but remember that the human-like monsters of mythology embody our ancient fear of other humans, and so in that way, they are the most plausible, and therefore the most frightening, monsters of them all.

Just to add to Willk's answer: some spiders do it too. This is the myrmarachne spider:

Myrmarachne have an elongated cephalothorax with relatively long chelicerae that projects forward in males. The cephalothorax has a waist, and the opisthosoma often has one too. The colors can vary from black to yellow, depending on ant species it is mimicking, and can change over the course of its life. For example, one African species was observed to mimic a certain species of ants as a juvenile, and another ant species as an adult.

They tend to wave their front legs in the air to simulate antennae, and many have bodies that also closely resemble ants. 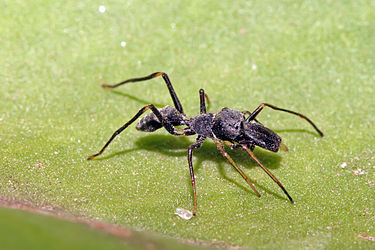 There are also people who mistake sharks for dolphins and end up in the Darwin Awards. They don't get eaten often enough for this to be a form of aggressive mimicry but it's just a matter of time for evolution to fix this.

Personally, I'd go for it either being nocturnal or having great abilities akin to mind control. Like others said, if it looks and smells exactly like a human, it might as well just eat like one. However, if it instead was mostly humanoid but influenced the mind of those around it, it could retain its killing tools while blending in even better than another human, as it could also induce a sense of security in nearby prey. On the nocturnal one, a similar story, mostly humanoid, but uses certain parts/tools to hide its predator bits. I'd recommend checking the movies "jeepers creepers" and, funny enough, "mimic" for inspiration, though both are closer to the "nocturnal" strategy

While I don't think actual creatures that display predatory mimicry actually exist, there are many instances in folklore that depict mimicry. A very popular example of this would be mermaids. Mermaids in many accounts are actually predators who would lure in their prey pretending to be beautiful women before killing them.

8
Evolution of a predatory antlered cat?
8
How to Train Your Mimic (or, why would a Mimic be capable of domestication)
6
Giant bug noises
5
What would Mimics be like without human influence?
22
Where could a vampire get blood without harming people?
5
Could Vocal Mimicry be a Viable Tactic for a Predator?
5
How large could a population of supernatural beings be and still be plausibly hidden?
4
Flying arboreal theropod venom mimicry