How does axial tilt affect atmospheric pressure and wind?

I'm working on an earht-like map and I'm having a hard time understanding where to put the high and low pressure zones. Here's some background info first.

How would axial tilt affect the location of the Hadley cell, Ferrell cell, and etc?

Does it impact the location of pressure zones? If so, by how much?

Would I need to shift the latitude of the pressure zones? Or would the high and low pressure zones remain at 30 and 60 degrees respectively

Would the be larger because of the slightly more extreme seasons?

I've tried following Azélor on Cartographer's Guild and Artifexian on Youtube but no one has answered the question regarding axial tilt.

Thank you so much for any help and if there is any information I should add here or if I put the wrong tags please let me know. Thank you!

The earth itself actually gets really close to the 25° you mention. According to NASA the obliquity of Earth's axial tilt varies between 22.1° and 24.5° over roughly 40000 year cycles.

There really isn't much (if any) information out there about correlation between axial tilt and how it'd influence the atmospheric phenomena you're asking about. This probably has something to do with the lack of comparable examples. We only have earth to work with.

However, Venus also has Hadley cells and its tilt is 177° and what seems to be a bigger factor is that venus has a way thicker atmosphere which makes it so it has only two hadley cells. 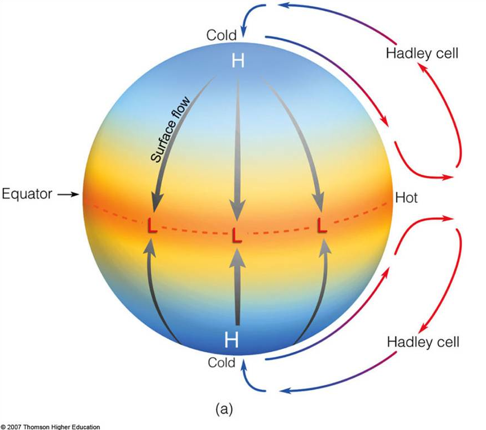 Another major influence on the layout of pressure systems is the land configuration on your earth. The image below shows the ideal distribution of pressures on earth if its surface was uniform on the left, and the actual recorded pressures and hadley cells on actual earth.

Conclusion: There are other factors that probably have a lot more influence on these patterns than a slight deviation in axial tilt, which would only make seasons slightly more pronounced. If you're working on a fictitious world with a whole new layout different from earth, it's basically guesswork what will happen where exactly, though understanding these phenomena and extrapolating the recurring patterns on earth could help you make a realistic estimation about what prevailing winds reign in certain areas of your world and how pronounced the effects are on your climate and pressure zones.

Regarding air pressure. 910hPa - 1090hPa should still be your pressure range given your atmosphere is equal in composition, density and height as Earth's atmosphere. (Mind that the values given here are the absolute extremes on earth since measurements started).

But you can deviate a little from Earth's pressures given the layout of your lands permits such circumstances (which would basically be guesswork since no data can be acquired from non-existing land).

Sources - In case you like more information on the subject.

Not the answer you're looking for? Browse other questions tagged science-based climate seasons wind or ask your own question.