For 30 years T Yoshi Munchakoopas has been been helping Mario out in many adventures even reuniting him with his brother when they were infants. 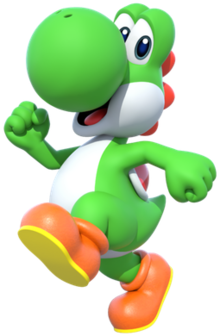 The question I want to ask is what would an anatomically correct Yoshi be like? Based on the available data, though, it is clear that Yoshi species:

so what species would Yoshi have evolved from, and what evolutionary pressures would lead to such a species?

Bonus Points if they have a tendency to commit tax fraud

Yoshi’s could actually be highly evolved snails that have acquired reptile-like traits through convergent evolution.

The little red thing on their back could have once been a snail shell, but as the animal evolved, it became vestigial, and is now only used as a saddle.

But the most obvious evidence of their ancestry would be their method of reproduction. Despite being called a male, Yoshi lays eggs, which is something normally only female animals do. This could mean that like normal mollusks, all Yoshi’s are hermaphrodities, possessing both male and female characteristics.

As for why a snail would evolve into a creature like Yoshi, it could be because of the hostile conditions of the Mushroom Kingdom, that would require the snails to flee from more dangerous predators, forcing them to develop legs for running.

If I were re-creating Yoshi, I would have him evolve from chickens. Yoshi seems very dinosaur-like with his lower hip structure, as opposed to side-leg gait of a reptile.

Of course, birds are dinosaurs: they lay eggs, they "herd," someone tried to ride an ostrich at least once, and they are fairly intelligent.

They don't have the reptilian/amphibian tongue or the ability to Jesus-Lizard through the air, and of course do not spit (I looked up the Dilophosaurus from Jurassic Park, but the spitting was pure fiction, the "only serious departure from scientific veracity" in the book).

If I were re-creating Yoshi, I would have him evolve from chickens who had to grow bigger, returning in form to their Dino ancestors. They lose feathers in the newly-warmed earth while keeping their relative stockiness, toughness, and massive egg-laying ability.

Not the answer you're looking for? Browse other questions tagged internal-consistency biology evolution video-games .