Could Orcs have domesticated hyenas? 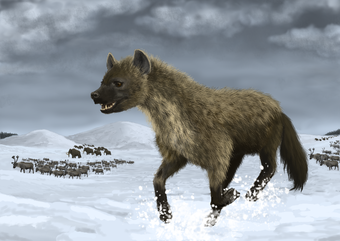 In actuality, could Orcs (or any other intelligent hominid) domesticate hyenas? Even if we assume that there are no wolfs where they live, would they even want to? If so, what behavioral differences compared to domesticated cats and dogs?

Note: magic does not exist in my story.

Quite likely - though not canines, hyenas are very behaviorally similar to wolves thanks to convergent evolution. They are pack hunters with a hierarchical social structure that a hominid could take the place of. Though not domesticated (domestication requires multiple generations of breeding to permanently alter the species on a genetic level), they can be tamed and trained relatively easily.

So why weren't hyenas domesticated? In order to really answer that question, we would need to understand how dogs were domesticated, and that question is still up for debate. The domestication of dogs occured around the Last Glacial Maximum - perhaps cold temperatures and lack of food forced humans and wolves to work together. Regardless of the reason, once dogs were domesticated, they quickly spread through the global human population, and why go through the trouble of domesticating hyenas when you already have dogs?

Most animals can be tamed, in the sense that while you may not be able to command them, you can at least ensure that they do not try to bite or harm you. Note that this isn't the same as domesticating them. To be able to say you have domesticated an animal is to train it to do something useful for you, such as fetch the newspaper or smell out truffles.

Hyenas can be domesticated. You commonly see them in circuses performing tricks for treats. It isn't too far fetched to say you could also train them to be attack dogs of a sort.

Hyenas are sort of domesticated in several places where they are native, see wikipedia. So yes domesticating them is very possible and realistic. They are similar to wolfs/ dogs.

Very, likely to domesticate them. As a matter of fact quite a few have been domesticated and used as pets.

Google Nigerian with Hyena, There are Nigerian gangsters that have pet hyenas and baboons, there are even pictures of small boys with baby baboons.

The Hyenas and baboons may even be on steroids as some are insanely big and muscly, the hyenas look more like the creatures from lord of the rings.

It is unlikely they could domesticate modern hyena, but they might be able to domesticate cave hyena, specifically since you have orcs, this is a slightly different functional world you have some flexibility to extinct hyena behavior.

Of course since this is a fictional setting using an extinct hyena species, you could have slightly different hyena, maybe your cave hyena have a looser social structure, one humans can easily infiltrate/take over.

Not the answer you're looking for? Browse other questions tagged society creature-design domestication pets hominid .

17
What evolutionary pressures would lead to Orcs?

22
Could mankind have domesticated the zebra as a riding animal?
18
How could our ancestors have domesticated a solitary predator?
6
Domesticated Hominids
7
How Do We Protect Humans in a Zombie Society?
6
What's the largest a canine could realistically get?
1
Domesticating rockfolk
6
Could giant mermaids domesticate baleen whales?
3
Is my Bioluminescent, Four-legged, Bat Creature Possible?