to celebrate the upcoming Sonic movie I've decided to ask the question of what an anatomically correct Sonic would look like? 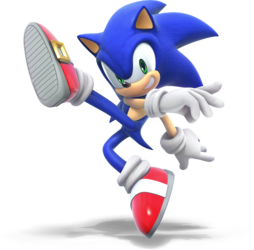 Based on all the available data we know that Mobians:

so what species would sonic have evolved from and what evolutionary pressures would lead to such a being?

Note: Bonus point if they

The Mobian Homonid is a recently-discovered sapient species that have diverged greatly from all other living forms of chordate. Genetic and anatomical research have demonstrated that the species is actually a form of theropod dinosaur that diverged from the lineage leading to birds early on in the clade's evolution, before the loss of the outer two fingers. The tiny "hairs", which come in a multitude of colors, are in fact feathers and assist in the species' high-energy, warm-blooded lifestyle.

Mobian evolution has progressed through an arboreal phase and a ground-dwelling phase. Their arboreal phase gave them primate-like hands, and though no known mobian subspecies is capable of true flight, many have evolved webbed fingers and substantial head crests that allow limited gliding ability. During their ground-dwelling phase, they have evolved a highly carnivorous lifestyle which involves high-speed pursuits.

Mobian movement has evolved to exploit the smooth, rolling hills ubiquitous in their environment. Their knee and hip bones are arranged and their leg muscles are linked over the pelvic region in a manner that causes them to function in an almost "wheel-like" motion when running at high speeds, retaining a large amount of momentum between strides. On flat ground, a Mobian can run at around 120 KPH, but thanks to this unusual arrangement they are capable of nearly doubling their speed while running downhill. They are also capable of curling into a ball and rolling, similar to the hedgehog, and will exploit this to roll downhill. However, this arrangement makes it very difficult for them to walk up hills quickly.

In order to improve their speed further, they use their wing-like fingers to propel them using an "inverted flapping" motion, which propels them downward and forward during strides, increasing their contact with the ground. Though highly effective, this form of motion requires immense amounts of energy, contributing to the species' ravenous appetite.

In addition to meat, Mobians are known to derive energy from a source rarely seen in Earth life - radiation. Mobians are highly resistant to DNA damage due to a huge concentration of DNA repairing proteins, and are in fact host to a variety of radiotrophic microbes that enable them to digest radioactive substances and derive useful energy from them. At least one plant in their environment has actually co-evolved with this tendency, absorbing radioactive atoms and concentrating them in its ring-shaped fruits. It is believed that their natural environment contains several strong radiation sources that some scientists hope may be useful as a power source.

The species is perhaps best known for its universal partial cyclopia, caused by a mutation in the SHH (Sonic Hedgehog) protein. Most SHH mutations are fatal or at least detrimental, and the likelihood of such a mutation persisting in a species over long periods is extremely low. Most scientists believe that the mutation was an early one leading to a strong genetic bottleneck, and that their subsequent biodiversity has occured due to adaptive radiation prior to evolving their radiotrophic ability.